History was made when all the Air Force Global Strike Command’s strategic power projection bombers simultaneously launched from Guam for their first integrated bomber operation in the Indo-Asia-Pacific region.

On Aug. 17, the U.S. Air Force bomber trio (B-52 Stratofortress, B-1B Lancer and B-2 Spirit) conducted the first coordinated operation in the U.S Pacific Command AOR (Area Of Operations). The three aircraft launched in sequence from Andersen Air Force Base, Guam, performed a flyover and then dispersed to conduct simultaneous operations in the South China Sea and Northeast Asia.

The B-52 is part of the latest Stratofortress CBP (Continuous Bomber Presence) detachment to Guam: the aircraft, belonging to the 69th Bomb Squadron from Minot AFB, ND, are about to return stateside after a 6-month deployment. They will be replaced by the “several” B-1B Lancers that have deployed to Andersen on Aug. 6 to undertake the CBP mission in the Pacific.

The B-2 is one of the three stealth bombers with the 509th Bomb Wing that have arrived in Guam on Aug. 9, to conduct extended deterrence operations in the Indo-Asia-Pacific theater, where China is continuing its colonization of the disputed islands in the East and South China Seas. 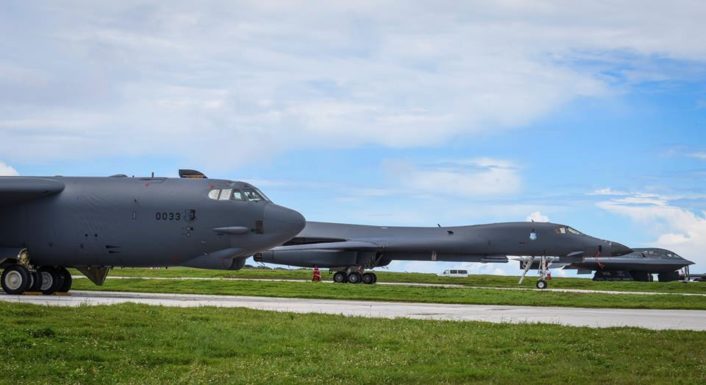 Missions like the one carried out on Aug. 17 are regularly conducted by the U.S. Air Force, even if these rarely involve all three different types of bombers: for instance, in 2014, the USAF launched a long-range mission with two B-52 Stratofortresses from Barksdale Air Force Base, La., and two B-2 Spirit stealth bombers from Whiteman Air Force Base, Mo.

The strategic bombers flew a non-stop for more than 20 hours and covered about 8,000 miles from their home stations to drop ordnance against target located inside Hawaii’s Pohakuloa military weapon range: a coordinated range operation which included low approach training that enabled the air force to put their strategic force’s capability to plan, coordinate and execute such a complex mission with “the right mix” of attack platforms.

“By doing this, we showed the world we can expertly integrate three different platforms with unique capabilities, meeting (Andersen AFB’s) mission by providing the president of the United States sovereign options to decisively employ airpower across the entire spectrum of engagement, thus achieving our wing’s motto, we are ‘prepared to prevail,’” Cox said.

In simple words, whilst the Air Force Global Strike Command emphasized that the routine deployments to Andersen AFB provide opportunities to train, share experiences and strengthen regional alliances, the truth is that the U.S. Air Force exploited the presence of the tri-bomber force in Guam to get some cool shots (like those in this post) and flex the muscles in the Pacific. 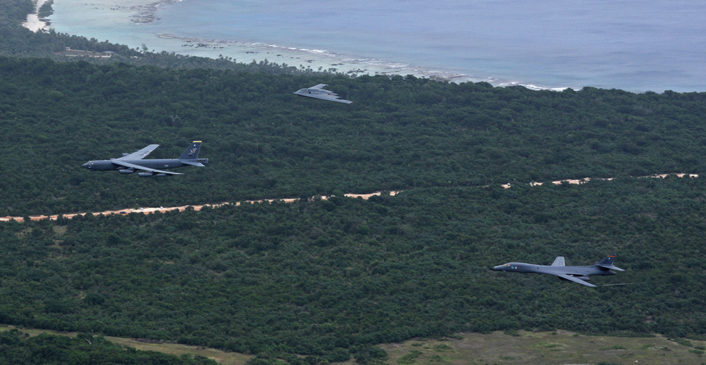 Actually, you can spot more than five U-2 Drangon Lady aircraft in this cool image Beale Air Force Base, home of the 9th Reconnaissance Wing, north of Sacramento, hosts the last U.S. Air Force’s U-2 […]