On Mar. 10, the U.S. announced the deployment of three Air Force B-2 stealth bombers from the 509th Bomb Wing, from Whiteman Air Force Base, Missouri, to the Asia-Pacific region amid growing tensions with North Korea.

Although the U.S. Air Force has not disclosed where the aircraft will be based, it is quite likely that the aircraft will operate out of Andersen Air Force Base, in Guam, strategically located in the Pacific, that has already hosted U.S. bombers involved in extended deterrence missions in the region.

On the previous day, Lt. Col. Damien Pickart, a spokesman for the U.S. Air Force, told to Reuters that the U.S. could deploy long-range bombers to Australia as concerns over China’s military expansion in the Asia-Pacific area continue to grow.

In fact, as reported by FoxNews.com, high-level discussions are in progress to deploy B-1 bombers in northern Australia and to expand B-52 bomber missions in the region, even if details such as the duration of the rotations and the number of personnel involved are still being hammered out.

Pickart added that these deployments would not only provide training opportunities for U.S. airmen but they would also deliver Pacific Air Forces and U.S. Pacific Command leaders “a credible global strike and deterrence capability to help maintain peace and security in the Indo-Asia-Pacific region.”

The talks about the chance to rotate bombers through northern Australia come in the wake of a freedom of navigation exercise conducted by the aircraft carrier USS John C. Stennis (CVN-74) and its Carrier Strike Group (CSG) in the South China Sea, where China is militarizing the region to guard its excessive territorial claims.

However an agreement between the two nations about bomber rotations in Australia would put USAF B-1B Lancers within striking distance of the South China Sea, most likely a move that would add more pressure on China, as already highlighted by Chinese Foreign Ministry spokesman Hong Lei “Cooperation among relevant countries should protect regional peace and stability, and not target the interests of third parties.”

Noteworthy while the U.S. Air Force conducts B-52 missions from Australia periodically, doesn’t fly any B-1s from there.

Moreover, as we have explained, this is not the first time that U.S. take in consideration the chance to base the Lancers on the Australian continent, but any previous rumour about this possibility never turned into the real thing.

Nevertheless an eventual deployment of the B-1B in Australia could finally bring back the Lancer in the Pacific Region.

In fact, unlike the B-52 and the B-2, the B-1B has been taken out from the Continuous Bomber Presence (CBP) rotation at Guam’s Andersen Air Force Base because it can’t carry any kind of nuclear weapon.

On the contrary giving its conventional bombing role the Bone has been heavy tasked in Iraq and in Afghanistan. 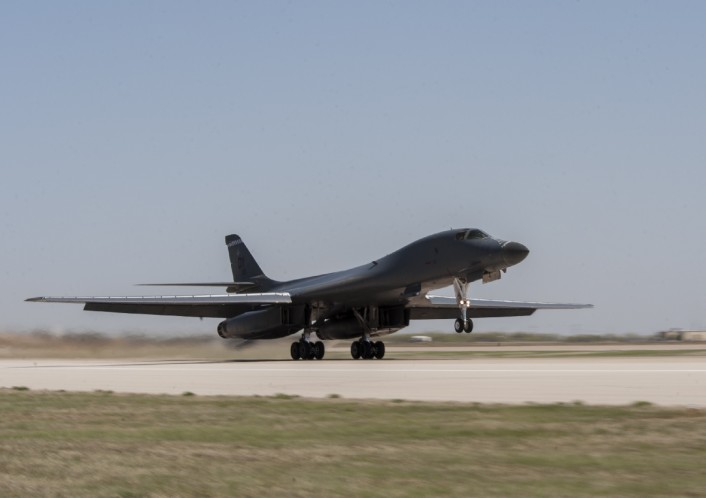 Four SD ANG F-16Cs returning from Poland have arrived in the UK. One of them sports the brand new overall grey color scheme aimed at reducing the aircraft’s RCS (Radar Cross Section). Four F-16Cs from […]

The 2015 Rose Bowl featured a B-2 stealth bomber flyover. On Jan. 1, 2015, Rose Bowl college football bowl game played at the Rose Bowl stadium in Pasadena, California was opened by the flyover conducted […]

Did you like the B787 high angle take off? Then watch this U.S. Air Force KC-10 insane departure

This is a really impressive take off! Last week, the video of a Boeing 787-9 Dreamliner taking off and pull off an amazing aerial display during rehearsals of Paris Air Show 2015 went viral. The […]