That’s a weird place to install a (handheld) GPS device.

The team fly 6 Mig-29 Fulcrum jets painted in the typical white, red and dark blue color scheme and they are part of the “Kubinka Diamond,” the Russian Air Force display team made of five  Su-27 Flankers of the “Russian Knights” and the four Fulcrums of the “Swifts.”

The photograph, most probably taken with a GoPro-like camera shows one of the team’s Migs rolling above the Kuznetsov aircraft carrier. But what is really interesting is the somehow unusual use of a GPS device just below the HUD (Head Up Display) of the aircraft.

Actually, it’s not the position of the GPS to be surprising, as some second-generation Mig-29s carry that system in the same place, but the fact that the device installed in the cockpit of the Swifts Fulcrum seems to be a handheld device (you may see the small antenna on the right). 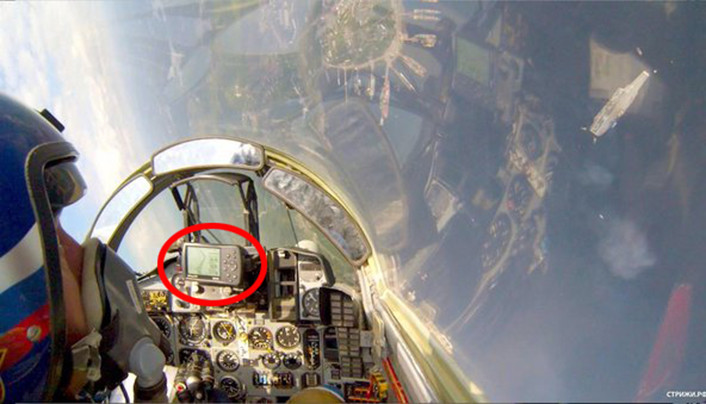 Russian build-up along the Ukrainian border continues. According to the National Security and Defense Council of Ukraine, the Russian Federation is continuing to amass forces at the border, including radar stations and Mig-31 Foxhound combat […]

Unique Point of View: R-73 Missile Launch as seen from the pylon of a Russian Su-27 Flanker

Cool photo of a Vympel R-73 (NATO reporting name AA-11 Archer). The R-73 is an infrared homing (heat-seeking), short-range missile with a sensitive, cryogenic cooled seeker that can “see” targets up to 40° off the […]

Why are two Russian Il-78 Midas tankers deployed to Egypt? Are Moscow’s bombers heading to the Mediterranean Sea?

The presence of two Il-78M Midas tankers in Egypt fuels theories about past and future Russian Air Force missions across the world. A photo taken at Cairo International airport on Oct. 29 proves the Russian […]