Besides the Polish Air Force’s inventory (e.g. the F-16, MiG-29 or the C-130 airlifter) the static display  also featured the historic aircraft restored by the Grupa Archeo  – a group of enthusiasts gathered around the Łask base, restoring and maintaining historical aircraft, including the I-22 Iryda indigenous trainer, MiG-21 MiG-15 or the MiG-23 interceptor.

The dynamic part of the show was quite modest, even though it was the uniqueness of some displays to make the event extremely interesting.

The show began with the Artur Kielak’s display, flying the XA-41 aircraft. Being one of the best Polish aerobatic pilots, Kielak really pushed his propeller-driven airplane to the limit. However, it was not his display the most electrifying part of the show.

Next, a show of force was displayed by the F-16 jets stationed at the Łask base: a couple of jets performed took with full afterburner and then performed a “carousel” meaning that there was a series of touch-and-gos, each of which was finished or started – depending on the point of view – with an aggressive, high-g turn and climb. This was a very spectacular start for the military part of the show. It’s a pity that such element was not showcased e.g. during the Radom Air Show this year, because it really portrayed the power of the F-16 jets used by the Polish Air Force. 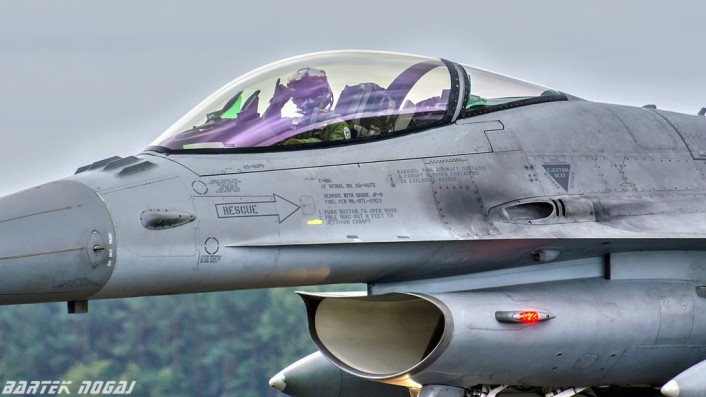 Among the displayed aircraft, the Polish Su-22 role demo team also performed a spectacular show, showcasing the abilities of the aging, but still capable aircraft. 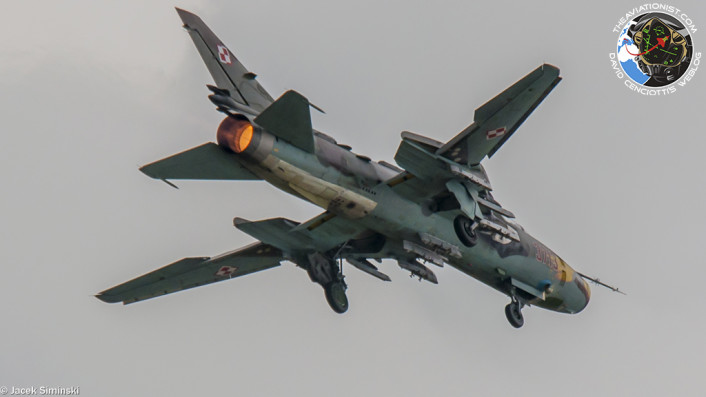 The display program of the Fitter team features some interesting passes,  with varied wing geometry, with one airplane flying in the landing configuration, while the other passes, within the same formation, with its wings fully swept back. The maneuver is not that easy to perform, since the speed overlap between the settings is quite small. 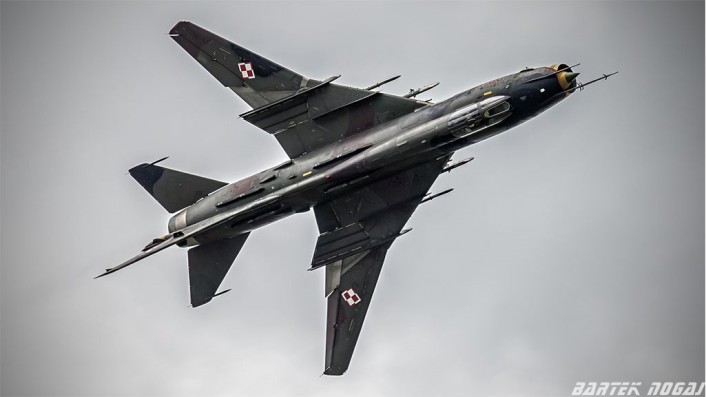 The third dynamic display, which took part during the show, was performed by the new Polish MiG-29 demo pilot – cpt. Bartek “Brawo” Kida. Adrian Rojek, famous for his vertical take-off during this year’s RIAT, did not fly on that day. The MiG display was spectacular, with a lot of flares launched throughout and a lot of afterburner used. 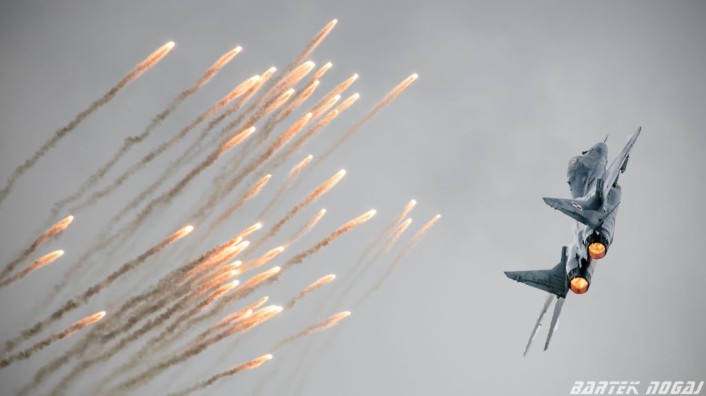 Unfortunately, Bartek Kida did not perform the famous tailslide, which is one of the most characteristic capabilities within the MiG-29 Fulcrum’s flight envelope. This was probably because of the low cloud altitude on Saturday, preventing the jet from performing maneuvers high enough to make the tailslide safe. 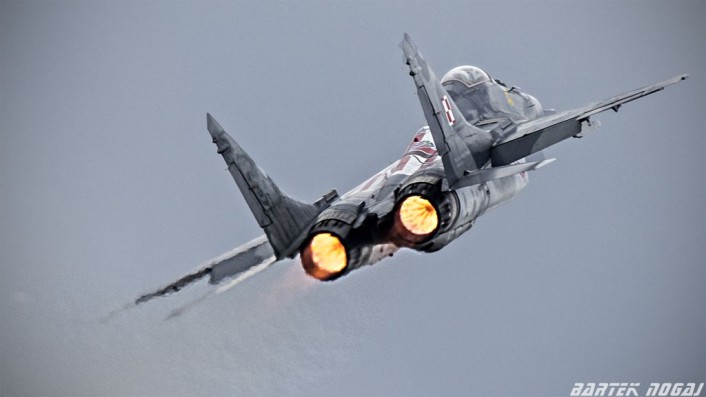 The Łask air show was also attended by the US Air Force C-17 Globemaster, belonging to the 105th Air Lift Wing of the New York  National Guard. The American airlifter performed a few majestic passes over the base, and it also showcased its rough field capabilities, by performing a short landing with the reversed thrust.

However, the most important and the most awaited highlight of the Łask Air Base open day was the long-awaited display of Polish F-16 demo team. The jet also flew during the Krzesiny Air Base celebrations two weeks earlier, however, that event was not open to the general public. 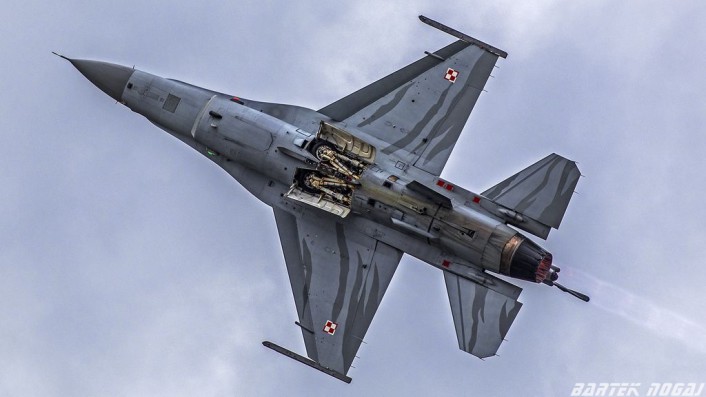 The Polish F-16 demo programme is very much similar to the Greek “ZEUS” display – however, this is not a surprise, since Robert “Bluto” Gałązka, the Polish pilot flying the F-16 demo, was trained by Georgos Androlukais and Emmanuel Andriakanis, who are the members of the Greek “ZEUS” demo team. 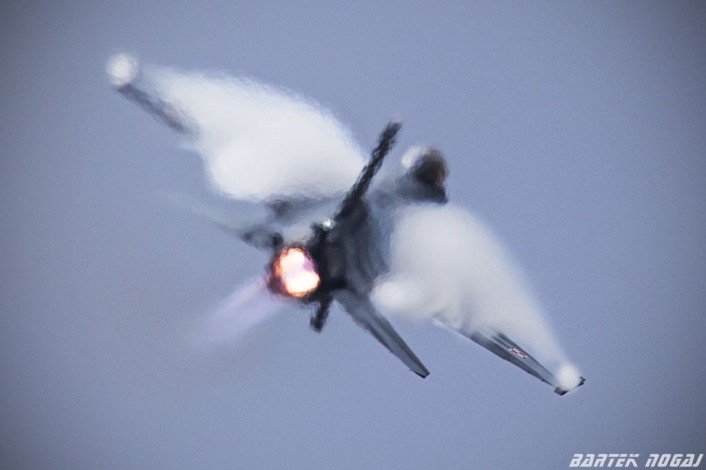 According to lotniczapolska.pl, the demo team prepared three variants of the display – high, low and flat. The flat display is the one  that is most difficult for the pilot, since during the 10-15 minutes of display his body has to cope with the g-load ranging from -3 to +9.5. 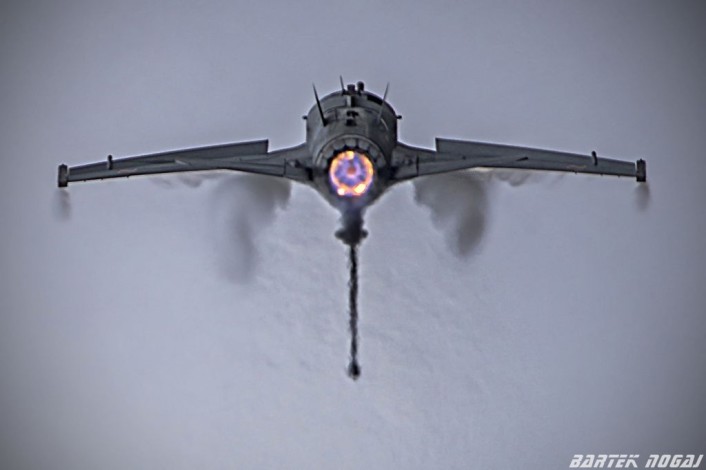 The minimum speed during the display is 115 knots, while the top speed attained by the Polish fighter during the performance reaches Mach 0.95. The altitude range for the display is contained between 60 and 5,000 meters. The display is said to feature a lot of flares, however, due to  malfunction of the countermeasure system, no flares were released in Łask on Sept. 26.

Cpt. Robert “Bluto” Gałązka has accumulated 1800 flight-hours so far, with 1300 hours flying the F-16. Since 2009, he was involved in 14 international exercises, including the Red Flag, NATO Tiger Meet (five times) and Frisian Flag (attended twice), as well as the NATO Response Force operations and the Tactical Leadership Programme.

After the video of the MiG-29 Fulcrum shooting HARMs, photos now show also the Flankers flying with the American anti-radiation missiles. Last week we got the visual confirmation of the Ukrainian Air Force MiG-29 Fulcrum […]