Six Sukhoi Su-34 aircraft have eventually arrived at Latakia to join the Russian contingent already there.

Images allegedly shot around the al-Assad International Airport clearly show one Russian Fullback about to land at the airbase in western Syria where 28 Russian aircraft have arrived last week.

One of the photos taken from the ground shows the six aircraft trailing what seems to be an airliner over Idlib: the larger plane is probably a Russian Air Force Tu-154.

Interestingly, a Russian Air Force Tu-154 using callsign RFF7085 could be tracked online on Flightradar24 during its flight to Latakia on Sept. 28, likely exposing the route followed by the six Su-34s trailing their accompanying Tu-154.

As the below image shows, the aircraft flew in international airspace over the Caspian Sea, to Iran and entered Syrian airspace after flying over northern Iraq: did the Su-34s have all the required diplomatic clearances to fly north of Baghdad or did they simply “sneak” into Syria by hiding under the cover of the transport plane?

Last week, US officials said that the first 28 Russian combat planes hid under the radar signature on the larger transport aircraft, in an attempt to avoid detection but there are chances that the flights had all the required clearances from the Iraqi Air Traffic Control agencies and were conducted as a standard long-range ferry flight: one tanker/airlifter, using radio and transponder, supporting multiple fast jets. 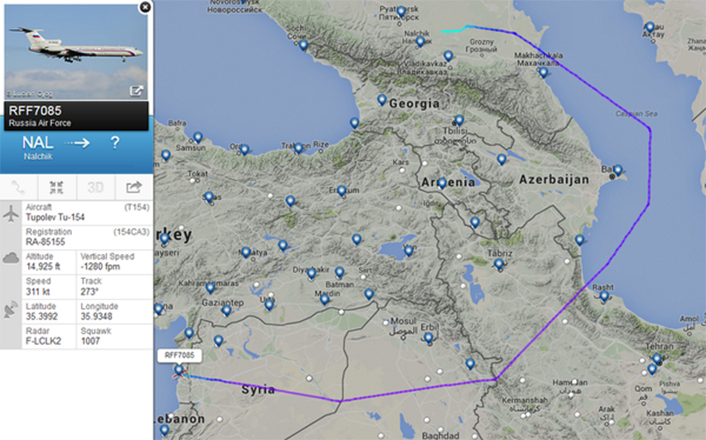 “We Did Barrel Rolls Around Tu-95s At The Request Of The Soviets”: USAF F-4 WSO Explains

Here are some memories from the Weapon Systems Officer who shot the famous photograph of the F-4 flying inverted near a Soviet Tu-95 Bear bomber. Last week we have published a blurry shot of a […]

Although it’s still struggling with the PAK FA, Russia is already working on 6th and 7th generation fighters

Although its 5th Generation radar-evading fighter jet is still being developed, Russia has already started working on both 6th and 7th Gen. combat planes. Sukhoi design bureau has prepared the first blueprints for Russia’s sixth-generation […]

Russian bombers to fly over the Gulf of Mexico. This is what happened last year in Central America.

Russian bombers about to become regular visitors of the Caribbean and the Gulf of Mexico. Not a first though. After visiting the Arctic and Europe, Russian bombers prepare to perform long-range training sorties over the […]