The U.S. Air Force has just deployed three B-2 Spirits stealth bombers to Guam. They have joined the B-1s already there. Not far from the troubled waters of Indo-Asia-Pacific region.

On Aug. 9, three B-2 Spirit bombers with the 509th Bomb Wing, have deployed to Andersen Air Force Base, in Guam, to conduct extended deterrence operations in the Indo-Asia-Pacific theater, where China is conducting a pseudomilitary campaign of expansion into the East and South China Seas.

For instance, the most recent satellite imagery shows China continues to show intention of militarizing the Spratly Islands.

The stealth bombers, from Whiteman Air Force Base, Missouri, are due to be involved in what the U.S. Pacific Command defined a “short-term deployment” during which they will conduct “local and regional training sorties, and will integrate capabilities with key regional partners, ensuring bomber crews maintain a high state of readiness and crew proficiency.”

The last time the B-2s deployed there was in March this year when three B-2 stealth bombers from the 509th Bomb Wing, flew to Guam amid growing tensions with North Korea.

Interestingly, the B-2s have joined the “several” B-1B Lancers (“Bones” in accordance with the nickname used by their aircrews) that arrived in Guam on Aug. 6, marking the first B-1 deployment there in a decade.

The aircraft, belonging to the 28th Bomb Wing from Ellsworth Air Force Base, South Dakota, have replaced the B-52s in supporting the U.S. Pacific Command’s (USPACOM) Continuous Bomber Presence mission.

“Andersen welcomes the B-1 squadron, and we look forward to working together to provide safety and security to the region, our partners and our allies,” said Brig. Gen. Douglas Cox, 36th Wing commander in an Air Force release. “The B-52s did an amazing job the past few years, and we know the B-1s will continue CBP excellence going forward.”

The B-1 units bring years of repeated combat and operational experience from the Central Command theater to the Pacific. The aircraft should have just received some additional cockpit upgrades during works conducted after the Bones returned stateside in January 2016, after a 6-month deployment worth 3,800 munitions on 3,700 targets in 490 sorties in support of Operation Inherent Resolve against ISIS, during which the B-1s carried out Close Air Support and Air Interdiction missions delivering a wide variety of PGMs (Precision Guided Munitions), including JDAMs on Daesh positions.

Noteworthy, unlike the B-52 and the B-2, the B-1B had been taken out from the Continuous Bomber Presence (CBP) rotation at Guam’s Andersen Air Force Base because it can’t carry any kind of nuclear weapon. So, the Lancer deployment in the regions brings a conventional heavy bomber within striking distance of China and North Korea.

Still, Pyongyang accused Washington of planning a pre-emptive nuclear strike, after the US announced it was deploying B-1 bombers in the Pacific for the first time in a decade. 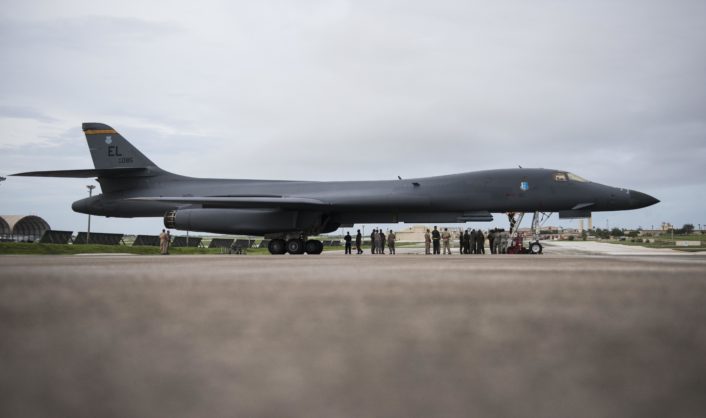 Will the B-1s also deploy to Australia, even closer to Beijing or Pyongyang than Guam?

Back in March, Lt. Col. Damien Pickart, a spokesman for the U.S. Air Force, told to Reuters that the U.S. could deploy long-range bombers to Australia as concerns over China’s military expansion in the Asia-Pacific area continue to grow.

At that time, high-level discussions were in progress to deploy B-1 bombers in northern Australia and to expand B-52 bomber missions in the region a move that was aimed to add more pressure on China. Now that the Stratofortress bombers have been replaced by the Lancers it’s unclear whether the U.S. Air Force has achieved an agreement with the local government and plans to fly any B-1s from there.

Lancers deployments on the Australian continent were considered in the past but none of these rumors ever turned into the real thing.

Anyway, U.S. Strategic Command’s assets are particularly active lately: whilst B-52s support Operation Inherent Resolve from Al Udeid in Qatar, B-52s were deployed to RAF Fairford, UK, in May and June, where the bombers participated in U.S. European Command Exercises BALTOPS and SABER STRIKE. Additionally, earlier this month, five B-52s and B-2s from all three of the U.S.’s strategic bomber bases took part in “POLAR ROAR,” flying simultaneous missions to the Arctic, the Baltic Sea and Alaska. During their last deployment to Guam, B-2s performed a running crew change at RAAF Tindal airbase in Australia on Mar. 22.

[Photo] B-52 bomber welcomed by water cannons at Guam

A B-52H Stratofortress belonging to the 69th Expeditionary Bomb Squadron is welcomed with a shower at Guam. The following image shows a B-52 taxiing through a clear water rinse system after landing at Andersen Air […]

Considered almost unbeatable in the air-to-air role, the F-22 successfully debuted in combat, taking part in air strikes against ISIS targets. But what if the F-22 found a 4th Gen. opponent? Even though we don’t […]