This is how the B-2 LAP “variant” could have looked.

In 1979, Northrop began studies for a low-observable strategic bomber that would eventually result in the B-2 “Spirit” stealth bomber as we know it.

Based on the research and the subsequent Autocad line drawings by Scott Lowther over at Aerospaceprojectsreview.com, Kurt Beswick has illustrated the Northrop LAP (Low Altitude Penetrator) concept that you can find in this post (please note that although the B-2 was the successor of the high and low altitude penetrator concepts, the artist has dubbed it “B-2 LAP,” a designation we have kept in this article.)

Vaguely reminding a Boeing study for a low-altitude stealth bomber dating back to 1979 Beswick’s LAP is a reviewed version of what is believed to be the basic design on which Northrop’s low altitude penetrator studies focused back in the 1970s.

Needless to say, there’s no evidence, that such an aircraft would look like that if built, but the shape is cool and the artist’s impression is somehow realistic (with elements reminding the triangle-shaped objects spotted over the U.S. a couple of years ago).

The illustration represents a concept that never made it past the design-stage : this does not mean something eventually made it into other “black projects.”

“I have taken some artistic liberties, including the updated markings and details. All the rest is speculative and based upon the performance requirements set forth by the USAF in the 1979-1980.”

Here’s the description provided by Scott Lowther to the original line drawing:

“Low-altitude penetration resulted in a less efficient aircraft with a much higher wing loading.

The low-altitude penetrator Northrop examined was something between a flying wing and a lifting body.

It would fly at high-speed and ultra-low altitude, much like an enormous cruise missile. As a result, it needed to be minimally visible to detection systems in aircraft positioned above it. Thus, the upper surface of the aircraft was largely featureless with the exception of the cockpit.

The underside featured both the flush inlet and engine exhaust in a flattened configuration, as well as two inward-canted vertical stabilizers. The high wing loading meant that the aircraft would need 200 knots airspeed for takeoff, consuming nearly 8,000 feet of runway. Total onboard fuel load would be 137,500 pounds requiring a few refuelings for each mission.”

Dealing with the color scheme, Beswick opted for the same livery of the Spirit:

“After discussing with my pilot buddies, they all agree that this aircraft would be no different in coloration than a B-2 or B-1, charcoal/dark gray-blue.” 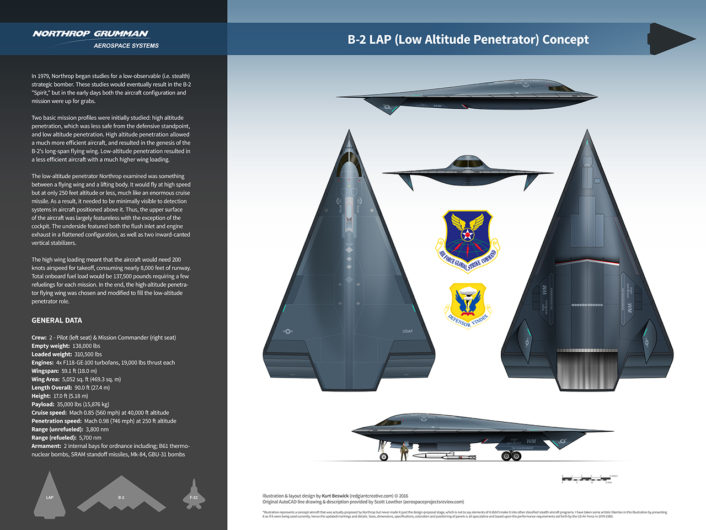 Last week an F-117 has taken part in Sentry Savannah exercise. Here’s an awesome 9-min video showing the stealth jet at work some 14 years after it was officially retired… As already reported, an F-117 […]