B-1B “Lancer” bombers belonging to the 7th Bomb Wing from Dyess Air Force Base, in Texas, are bombing ISIS militants in Iraq and Syria.

An unspecified number of B-1B bombers of the 7th Bomb Wing from Dyess AFB is currently operating from Al Udeid airbase, in Qatar. If you type the Qatari airbase name in Google Earth, you can spot at least 5 “Lancers” parked on the main apron, along with KC-135 tankers. 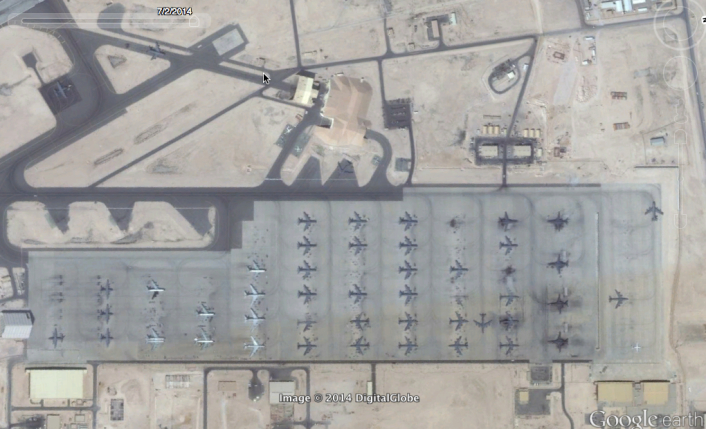 Originally the “Bones” (as the plane are nicknamed by their pilots), supported by 300 airmen, were deployed to the region to support Operation Enduring Freedom in Afghanistan as part of a standard 6-month rotation to the main U.S. Air Force base in the Persian Gulf.

Then, they were destined to the current air campaign against ISIS in Iraq and Syria.

More or less at the same time when their presence in the opening waves of air strikes in Syria was confirmed by officials at the Pentagon, a composite photo made with video stills, of a B-1B circling over Fallujah, 69 kilometers to the west of Baghdad, on Sept. 24, was posted on Arab forum: a reminder that there’s a war going on in Iraq too and that air strikes on ISIS not only involve F-22 Raptor stealth fighter jets and F-15E aircraft, but also supersonic variable-sweep wing, jet-powered strategic bombers too.

H/T Tom Cooper at ACIG.info for finding the image.

The F-15QA is the first of 36 aircraft developed specifically for Qatar. Boeing announced that the F-15QA, the most advanced version of the F-15 Eagle, performed successfully its first flight from the company’s plant at […]

Many media outlets are reporting the fact that Syria is expecting a shipment of Mil Mi-35 attack helicopters which were in Russia for maintenance, and were being returned. The MV Alaed had picked up its […]

Sabers Rattle as New Round of Brinkmanship Appears to Unfold Off Syrian Coast.

Syrian Situation Update The U.S. administration has suggested there may be an impending military response to the claims of a chemical attack on the Syrian city of Douma on Saturday, April 7, 2018. Over 500 […]