On Sept. 4, the 337th Test and Evaluation Squadron sent a solo B-1B over the Gulf of Mexico and its sea ranges to prove the concept that Lancers (or “Bones” as the swing wing bombers are dubbed) can be used to attack surface targets whilst at sea; in other words, the goal of the mission was to assess and improve the B-1’s capabilities.

According to the Dyess AFB website the B-1 released six munitions, including a 500lb GBU-54 laser guided bomb as well as 500lb and 2000lb  joint direct attack munitions (JDAM).

Lt. Col. Alejandro Gomez, 337th TES special projects officer said: “This evaluation solidifies what our crew members have already known: We can strike surface targets. The knowledge we gain from these events gives combatant commanders assurance that we can be called upon to complete the mission.”

The mission, called a “a maritime tactics development and evaluation” or TD&E ,saw the B-1 being given the goal of detect, target and engage small boats using currently fielded and available weapons, released in all weather conditions.

The dramatic photo in this post was taken during the mission and shows that the B-1 was very effective in doing its goals: the term “using a sledgehammer to crack a walnut” springs to mind as the GBU-10 is captured a split second before annihilating a small rigid hulled boat.

The Bone would give a group of Pirates a very bad day! 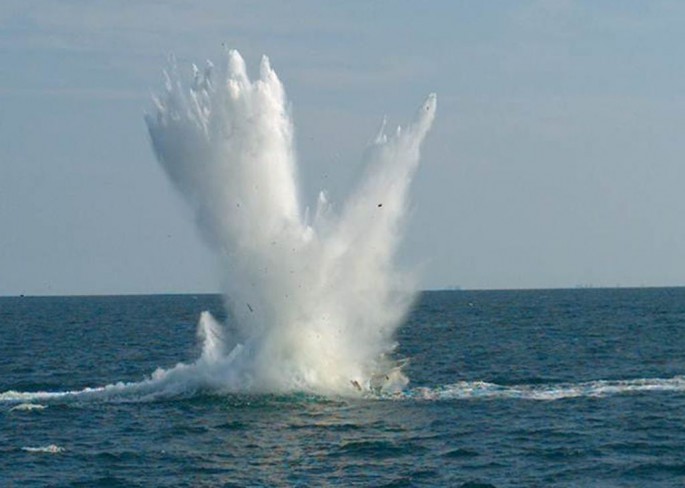 U.S. is about to deploy F-22 Raptor stealth jets to Europe in a show of force against Russia

F-22 Raptors to be deployed to Europe “very soon.” The Air Force is about to deploy the F-22 Raptor 5th generation multi-role stealth fighter to the European theater, as a potential deterrent to Russian aggression, […]

A interesting photo shows a B-1B accelerate at night after refueling from a KC-135 B-1B bombers of the 7th Bomb Wing from Dyess AFB, deployed to Al Udeid airbase, in Qatar, have taken part in […]

The B-1 bombers allegedly deploying to Guam were staging a mock trans-Pacific deterrence mission?

Last week we reported about the alleged deployment of seven B-1B strategic bombers to Guam exposed by the radio comms in the clear intercepted by an airband listener. Around  09.00 pm CDT (GMT -5) on […]