The following story, that has been circulating on mailing lists and forums for a few days, recalls secret mission by a U.S. Air Force SR-71 during the Yom Kippur War in 1973. It was written by Col. Jim Wilson, a former Blackbird pilot who has written a self-biography titled “SR-71 Mission to the Middle East”.

I found it extremely interesting because it recounts strategic range spy missions over the Middle East; something that is quite current, considered the tensions in Syria and the risk of an eventual U.S. attack on Damascus Chemical Weapons arsenal.

I’ve slightly modified the piece (that may be a book’s teaser), to make it shorter than the version received via email.

Egypt and Syria opened an offensive against Israel [in late ’73] and launched a coordinated series of air, armored and artillery attacks into the Sinai and Golan Heights.

[…] The initial Israeli military losses were significant. And the Israeli’s reaction included an urgent call for assistance from the United States.

At that time, our reconnaissance satellites in space didn’t have the capability to provide Israel with the immediate and adequate intelligence necessary to assess and defend against the enemy.

So we prepared SR-71 Blackbird missions to zoom over the active battlefields then recover in Great Britain.

The mission fell within the Blackbird’s capabilities although such a logistically difficult and long mission had never previously been accomplished.

[…] The English instantly refused any Blackbird post-mission recoveries in England.

So Plan B was quickly drawn up fly the SR-71 out of upstate New York and recover at Seymour-Johnson, North Carolina.

With utmost secrecy the SR-71 folks mobilized and deployed.

A handful of days later, our FIRST photo/electronic reconnaissance mission over the live Israeli battlefield  was successful.

[…] I was assigned to fly a backup SR-71 and to stay on alert at Griffiss AFB, New York. And also to be prepared to fly ‘follow-on ‘ missions.

I was back up alert on two more successful missions.

Then more flights were needed. And it was now my turn !

[…] Takeoff was at 2 o’clock on a clear but moonless night with about fifteen inches of New York snow plowed off the active runway.

The first 450 miles had to be flown subsonic, since we had to ‘clear’ the airliner tracks off the East Coast before I could safely re-fuel. […]

With absolute radio silence, in the serious North Atlantic darkness, I entered an electronic rendezvous with three tankers. And took on 3,500 gallons of fuel from each. 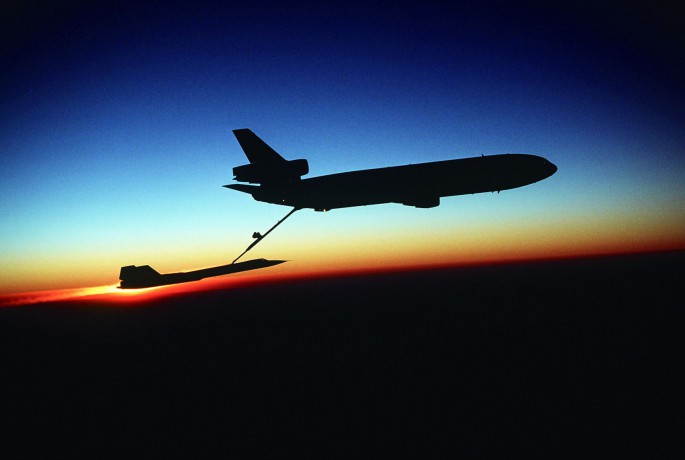 After completing post-refueling checks, I clicked on both after-burners and started acceleration to a leisurely but attention-getting Mach 3 cruise across the sea. […]

About 2,000 miles across the Atlantic, I peered with awe as the sun came up right in front of my eyes giving me an incredible view.

The next refueling was a couple hundred miles north of the Azores, where I took on another 5,000 gallons each from two tankers.

I started my second acceleration while turning slightly for Gibraltar’s rock.

Maintaining 80,000 feet we bisected the narrow strait then gazed at hundreds of miles on both sides that were several notches improvement on the word spectacular!

Then I split the Mediterranean’s middle toward a hurting Israel where the weather was becoming significantly worse than forecast.

But the third air-refueling south of Crete went along as scheduled, although in challenging and bumpy ‘hook up ‘ weather.

Now packing in a full load of 80,000 pounds of JP-7, I lit the after-burners and accelerated toward our electronic and photo mission targets.

In near unbelief . . I stared at it for a second . . then quickly scanned relevant oil pressure RPM exhaust gas temp and nozzle position gages.

There were no nasty confirmations.

However, I could not just ignore the red light then intentionally fly into a live combat zone and face a possible engine failure.

There were no viable emergency airfields around able to handle a SR-71 Blackbird’s turn-around.

Particularly since a conflicted Israeli government was not aware of our top secret mission. On the other hand, the Israeli’s military and government sorely needed to totally focus their thinking on survival.

So I took the engines out of afterburner while ‘ thinking through ‘ trying to find the LEAST undesirable alternative.

Then I had a wonderful surprise.

After coming out of afterburner the red warning light blinked out! And I became fairly-well convinced it was a false alarm.

On the other hand, my SR-71 emergency page reaction to that red light had erased ONE TON of critically-needed JP-7 fuel.

Those tankers were 80 miles away. Butthey were moving further distant each second.

Rejoining them to top off the Blackbirds tanks would present a new set of threats and undesirable scenarios. To continue on would be ‘ very close ‘ the remaining fuel.

But I relit the afterburners anyway. And I intentionally pressed forward into active combat.

During that acceleration had another LONG [ 5 ] five second RED light. Then after clicking off. It stayed off.

My flight track led down the Suez Canal past Cairo, then made a Mach 3.15 left turn crossing int entering the Sinai war zone.

The Blackbird’s panoramic and specific point cameras captured detail of hundreds of targets, as we flew across the Dead Sea and Golan Heights.

Approaching Lebanon, I made a sweeping right turn over Syria.Then turned back for a parallel path run over the Sinai to gain maximum image coverage for Israeli intelligence.

The airplane was running good. And I pushed it up a bit to Mach 3.2 before exiting near Port Said, Egypt.

Once out over the Mediterranean, I descended to 25,000 to ‘hit’ my fourth set of tankers.

But as fate would have it not only was I low on fuel because of messing around with that red light but building cumulonimbus thrust itself into our refueling location.

The refueling tanker commanders with their serious intent to carry out an indispensable refueling punched directly into the festering new ‘ bumper.

Instantly, we were ALL inside that ‘brewing mix.’ We trusted our internal electronic azimuth, distance measuring equipment, and back-seater’s skills as we crept toward a KC-135’s refueling boom.

The forward visibility was lousy and the tanker wasn’t eye-sight visible.

In thick turbulent cloud very LOW on fuel I eased up on an unseen tanker.

My backseater called out:

Across a momentary alley in the clouds less than 15 minutes before ‘ flame-out. ‘ I spied the tanker. We hooked up. […]

We completed a fifth 10,000 gallon air refueling near the Azores before truly enjoying another leisurely Mach 3 flight back across the Atlantic for recovery at Seymour-Johnson.Within 20 minutes, excellent folks had our intelligence information downloaded, and safely onboard a dedicated Air Force courier aircraft to a D.C Photo Interpretation Center.

These missions weren’t declassified until the SR-71 program closed at the Cold War’s end. And most remaining Blackbirds are now in various museums.

H/T to Stefano Perer for the heads-up

Once again, Flightradar24.com provides an insight into military operations. This time, the Russian air bridge to Syria. Some days ago we explained how everyone (including low-tech terrorists “armed” with a mobile device and an Internet […]

Syrian airliner forced to land in Turkey had radios, antennae, missile parts and ammunition on board

The Syrian Air Airbus 320 that was forced to land near Ankara, in Turkey on Wednesday Oct. 10 by Turkish Air Force F-16s was carrying ammunition. Probably. Hurriyet daily news has quoted Turkish Prime Minister […]