As the aircraft performs its British debut at the RIAT (Royal International Air Tattoo) at RAF Fairford here’s an interesting video filmed in 4K that was released by the British MoD.

It shows the first British F-35B Lightning II, flying along with one of the two U.S. Marine Corps airframes that also flew from MCAS Beaufort, South Carolina, to RAF Fairford airbase, UK, during the type’s first transatlantic flight, and performing the peculiar Vertical Landing of the STOVL (Short Take Off Vertical Landing) variant.

The participation of the controversial 5th Gen. stealth aircraft to an airshow in the UK was planned to take place in 2014 but it was cancelled shortly before the four USMC F-35Bs started their transatlantic trip after a runway fire incident involving an F-35A at Eglin Air Force Base, on Jun. 23, 2014, caused a temporary fleet-wide grounding.

Two years later the F-35B is the highlight of the RIAT.

The image below, taken by Tony Lovelock, shows the USMC F-35B 168727/VM-19 VFMAT-501, seen here going into Hover mode during a short display at RAF Marham ahead of the display at RAF Fairford.

This aircraft accompanied by Tornado ZG777, and ZM137 F-35B Lightning II of the RAF had previously overflown Rosyth where the new British Carrier is being built for the Royal Navy. 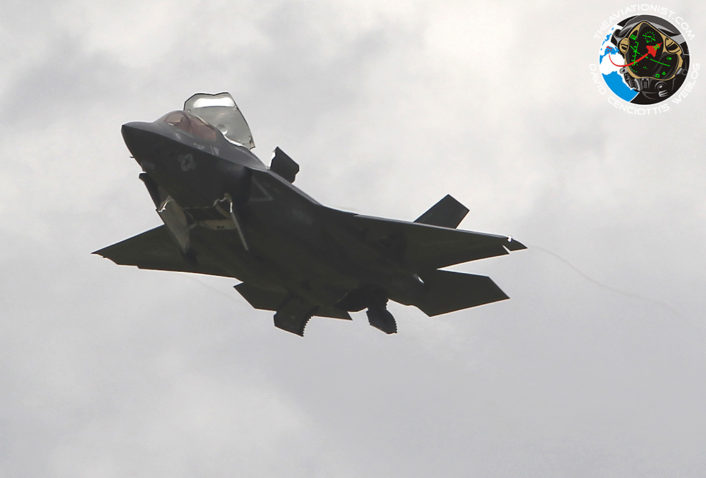 Last week the Norwegian Crown Prince visited Lockheed Martin’s Ft Worth facility as part of an effort to promote Norwegian industry within the JSF-program. As part of the visit, LM fitted an F-35A with two […]

Heroic Spitfire Legend Dead at 96: Geoffrey Wellum Has Passed Away.