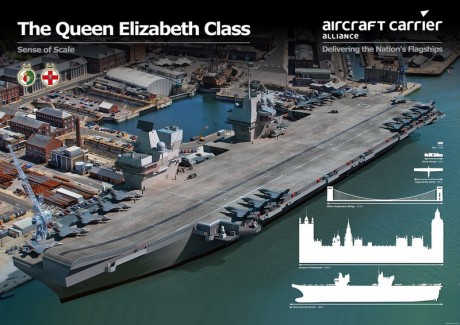 The hull of the carrier, which is nearly as large as a Nimitz class carrier, and will host F-35B STOVL (Short Take Off Vertical Landing) 5th generation planes, has almost been completed and the inclusion of one of the islands which had been constructed in Portsmouth and brought to Scotland by barge makes the hulk something resembling an aircraft carrier at last.

The two carriers (Queen Elizabeth & Prince of Wales) are being built in a modular fashion in several yards all over the UK and then  shipped to Rosyth in Scotland to be assembled into the finished article.

This isn’t a new process but one that is used in the construction of cruise ships and other large ocean going vessels.

Here’s the computer generated video of the construction process

Is the F-35 stealth jet so advanced that it can be flown using one hand only? Picture raise question

Do you remember HOTAS (Hands On Throttle And Stick)? Ok, forget it. As the following  Lockheed Martin picture shows, the F-35B, the (most costly) Short Take Off and Vertical Landing (STOVL) version of the Joint […]