The Italian Eurofighter Typhoons are involved in the OT&E in the air-to-ground mission.

In the last weeks, the Italian Air Force Typhoons currently deployed to Decimomannu airbase in Sardinia have flown with Litening targeting pods and inert GBU LGBs (Laser Guided Bombs), the first sign of their involvement in the OT&E (Operational Testing and Evaluation).

Indeed, the Italian F-2000s (as the aircraft are designated within the Italian Air Force) are conducting tests aimed at assessing their potentiality in the air-to-ground role: not only is a multi-role Typhoon capable to carry Paveways and JDAMs (Joint Direct Attack Munitions), already used by the ageing Tornado and AMX (that will be replaced by the F-35 in the future), useful for the Aeronautica Militare as it is for the Royal Air Force, but it could also be more appealing for potential foreign buyers.

Although the air superiority role remains priority, considered their ability to use the ordnance in inventory for other aircraft (including the Storm Shadow air launched staff off missile), the Eurofighter will possibly be used in the swing role or as “back up” attack platforms within the Italian Air Force for several years to come. 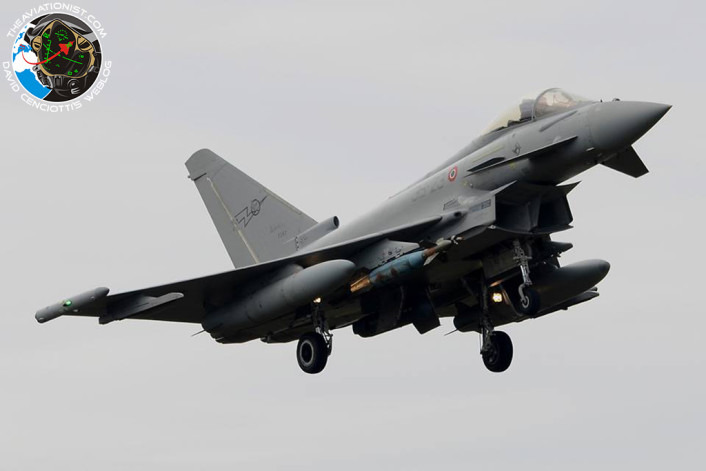 The British Typhoons have made an interesting close encounter yesterday: a quite rare Be-12 Chaika. On Aug. 25, two Royal Air Force Eurofighter Typhoon jets in QRA (Quick Reaction Alert) at the Romanian Mihail Kogalniceanu […]