The attack that took place against Iraq on Feb. 16, 2001 was one of the largest strike missions conducted by U.S and British aircraft during Operation Southern Watch.

Following the end of the Gulf War in 1991, to enforce the no fly zone (NFZ) that was set to narrow Iraqi airspace, two different operations were conducted: the Northern Watch, which started in 1997 succeeding to Operation Provide Comfort, to monitor the airspace above the 36th parallel, and the Southern Watch, that began in 1992, to control the airspace south of the 32nd parallel, extended to the 33rd parallel in 1996.

Iraq soon decided not to respect the no fly zone, and Iraqi air defense systems began to attack both Northern and Southern Watch aircraft, even though the SAM (Surface to Air Missile) sites were more active against Southern forces: many no fly zone violations occurred since 1992, with Iraqi fighters that crossed the no fly zone several times. Nevertheless the main threat to the allied aircraft was posed by the Iraqi SAM and anti-aircraft artillery batteries that soon became the target of several air strikes. As the ones conducted during Operation Desert Fox in 1998 and the powerful raid conducted by Joint Task Forces Southwest Asia, on Feb. 16, 2001.

As explained by the U.S. Marine Corps historian Fred Allison to Giampaolo Agostinelli for his book “Where Sea Meets The Sky,” about 70 aircraft were involved in this air strike, a quarter of those released weapons. Among the strike aircraft which took part in the mission there were eight U.S. Air Force F-15E Strike Eagles and an element of Royal Air Force Tornado GR1s from bases in Kuwait, with fourteen F/A-18s belonging to Marine Strike Fighter Squadron 312 (VMFA-312) Checkerboards and to Strike Fighter Squadron 105 (VFA-105) Gunslingers launched from the aircraft carrier USS Truman (CVN-75).

The strike was supported by E-2Cs in the AWACS role, S-3Bs and KC-10s for air-to-air refueling and EA-6Bs for electronic warfare. The escort for the strike force was provided by VF-32 Swordsmen F-14B Tomcats and by USAF F-15C Eagles. 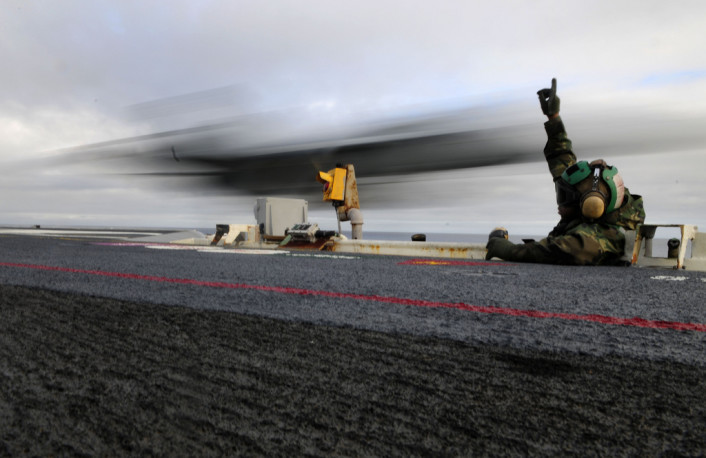 Some of the targets (that consisted in radars, communications centers and command centers) were placed north of Baghdad and to hit them the Hornets were loaded with external tanks, 200 rounds of 20 mm ammunition combined with AIM-120 and AIM-9 air-to-air missiles  for self-defense and two types of standoff weapons: three AGM-154 Joint Stand-Off Weapons (JSOWs) for each VMFA-312’s jet and Standoff Land-Attack Missile – Expanded Response (SLAM-ER) missiles for VFA-105’s F/A-18s.

The mission was launched after sunset and the Hornets refueled from an Air Force KC-10 tanker over Kuwait. The F/A-18s were the last aircraft to reach their targets over Baghdad, with the Iraqi gunners already alerted from the previous strikes: their first Gunslingers jets launched their SLAM-ERs which hit their targets with great accuracy as demonstrated by the TV data sent back by one that hit Al-Taji air base that, when slowed down, showed a man outside the building smoking a cigarette.

Then, Checkerboards Hornets delivered their JSOWs from 36,000 feet while the sky was erupting “into a blaze of AAA and SAMs.” But in the rarefied air at FL360, the F/A-18s were too slow to maneuver away from the SAMs, so they lit the burners for a steep dive descending into the thicker air where the pilots could maneuver more effectively against the surface to air missiles.

Moreover in addition to the SAMs launches, the Hornets drivers were notified that also a MiG-23 Flogger had taken off from Al-Taqaddum airfield below them. Luckily for them (and with great Tomcat crews disappointment) the MiG escaped immediately towards north. 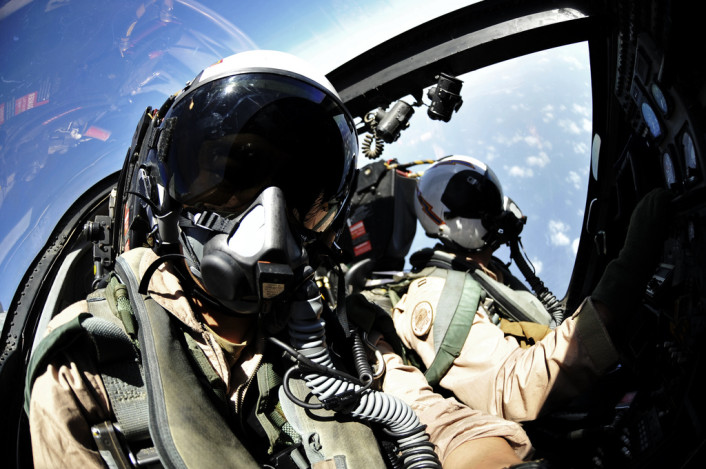 Then with the afterburners still ignited, the Hornets avoided the last Iraqi SAMs and reached the tanker on a racetrack on the border of Kuwait. Suddenly  a British voice came over to the radio: a Tornado was being targeted by a SA-6 which was receiving good tracking information from its radar.

The mission ended after the safe recovery of the aircraft onboard the Truman’s deck. As Allison recalls: “The mission had lasted slightly more than four hours and had accomplished its purpose. The Iraqis shut down their radars and there were less attacks on coalition aircraft over the NFZ, at least for a time…”

This photo explains why combat planes still wear camouflaged color schemes! A unique U.S. Navy F/A-18F bearing a brown camouflage scheme has likely had many question why a US Navy Strike Fighter would be such […]

This GoPro video will bring you the closest as you can get to the flight deck of a U.S. aircraft carrier during catapult launches

Update: Here’s Why We Saw So Many Garmin Smart Watches at MCAS Miramar