According to the JoongAng Ilbo, at least an F-15K carrying the hi-tech, 1.8 million USD stand-off missile was scrambled following the attack.

With a range of 270 kilometers (170 miles), a SLAM-ER fired from within South Korea’s airspace can cover the entire territory of North Korea, hitting any designated ground target.

Therefore, had the Pyongyang’s shells hit South Korea instead of landing in the water, ROKAF planes would have been ordered to attack several military commands in North Korea, including those units suspected to have shelled South’s forefront islands.

Military sources told the JoongAng Ilbo that coordinates of the selected targets (including the Supreme Command chaired by Kim Jong Un) had been collected through satellite images, wiretapping, North Korean defectors and good, old-fashioned HUMINT.

Obviously, not all targets would be attacked with SLAM-ER: F-15Ks (that have recently taken part in Red Flag exercises in both Nellis Air Force Base and Alaska), can carry a wide variety of bombs, including the 5,000-lb “Bunker Buster” GBU-28.

Armed F-15K were scrambled several times in the past following violation of the Northern Limit Line or threats by North Korean planes. 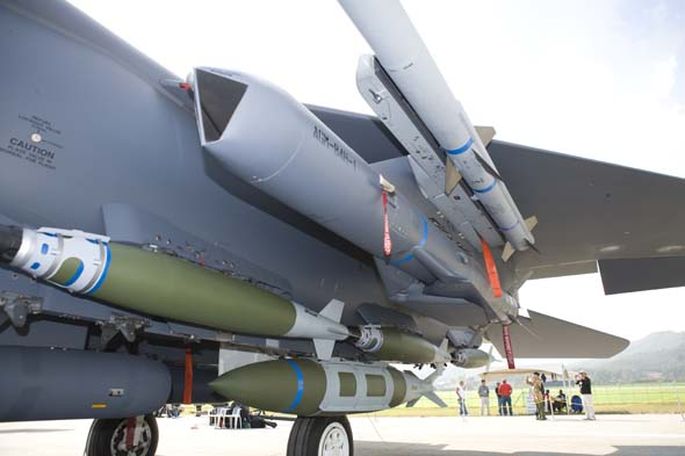 U.S. moved its F-22 stealth fighter jets to South Korea. Here’s what they could do over there.

An unspecified number of F-22 stealth fighter jets arrived in South Korea on Sunday, Mar. 31, 2013. According to the Wall Street Journal, the aircraft flew from Kadena air base, in Okinawa, Japan, to Osan […]