Although they have already begun celebrating it in the past few days, North Koreans consider April 15,  birthday of Kim’s grandfather, Kim Il Sung, the most important of national holidays.

This year, no military parade or mass events are expected, but since major holidays have been used in the past to show North Korea’s military power to the world, many analysts believe Monday’s celebration could be the date chosen for a provocative missile launch, provided Pyongyang will eventually decide to conduct one.

If depended on the weather conditions at the suspected missile test facilities, the missile launch would be a go, based on the forecast. 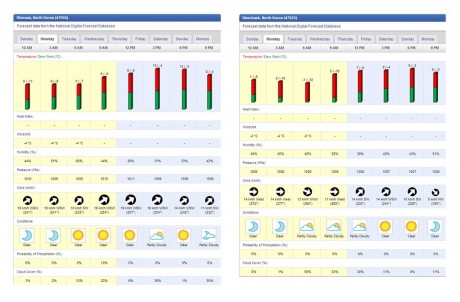 Data from the National Digital Forecast Database via Weather Underground.

It took about 24 hours but eventually details about the (almost) close encounter close to the border between North and South Korea emerged. The news that some North Korean fighters had violated the DMZ spread […]