A memorable anti-terrorist operation took place over the Mediterranean Sea in October 1985.

With passengers and crew hostage, they directed the vessel to sail to Tartus, Syria, and demanded the release of 50 Palestinians jailed in Israeli prisons. After two days of negotiations (and the killing of an American citizen, Leon Klinghoffer, a Jewish retired businessman who was in a wheelchair) the terrorists agreed to abandon the ship in exchange for safe conduct and were flown towards Tunisia aboard an Egypt Air Boeing 737.

Of course something had to be done to intercept the commercial airliner which would have carried the terrorists who had hijacked the Achille Lauro liner off Egypt.

On Oct. 10, after having completed a major NATO exercise in the Central Mediterranean, the USS Saratoga (CV-60), commanded by Capt. Jerry Unruh, received a phone query from Sixth Fleet headquarters in Gaeta, Italy, asking for the exact location of each ship of the battle group.

Intelligence had indicated to the National Security Council (NSC) staff that the hijackers were still in Egypt and about to be transported out on an Egypt Air Boeing 737 about to be flown to Tunisia.

According to Brodsky the idea to attempt to capture the hijackers came from a Navy captain in the NSC staff who suggested: “Why don’t we pull a Yamamoto on these guys?” referring to the Japanese admiral intercepted by American fighters over the Pacific during WWII.

Aboard the Saratoga orders were immediately received from Sixth Fleet to launch the Alert CAP (Combat Air Patrol) and despite the official “Alert 60” posture, two VF-74 F-14A Tomcats and a VAW-125 E-2C Hawkeye were airborne in just 22 minutes.

Within minutes, confirmation of their mission came from Sixth Fleet.

Since the exact take-off time, the route and the altitude the hijackers plane would fly were unknown, other VF-103 and VF-74 Tomcats, with tracer ammunition in their 20mm cannons, were launched, while another E-2 alongside with VA-85 KA-6D tankers were alerted for a possible launch.

But, perhaps, the most difficult problem to solve was how to communicate with the airliner, once intercepted, and how to persuade the crew to divert to the NATO base at Sigonella, Sicily.

C3 (Command, Control and Communication) provided by the E-2C was essential to the success of the mission. “CDR Raplh Zia, commanding officer of the E-2 squadron, widely respected for his airborne professionalism, had been kept abreast of unfolding events almost from the beginning. As much as anyone, he had a clear picture of what we were attempting to do. When directed, CDR Zia personally manned the second E-2 and was launched to assume airborne control of the operation. There wasn’t a better man for the job. His ability to quickly assess the situation and ad lib solutions to each hiccup in the evolution was the key to success,” Brodsky explains in “Carrier Air Group Commanders.”

Since, as we explained, the takeoff time of the Egypt Air airliner was unknown, the Tomcats assigned to CAP stations south of the Greek island of Crete were vectored by the E-2 to intercept all contacts that fit the profile of an airliner following the airways between Egypt and Tunisia.

According to Brodsky, on the fourth intercept of the evening, two F-14s pulled up behind an airliner and when they radioed the markings and tail number-2843- back to Saratoga (the tail number had already been discovered by Israeli intelligence agents as reported by Michael K. Bohn in his book “The Achille Lauro Hijacking: Lessons in the Politics and Prejudice of Terrorism”), the Tomcats were ordered to remain in position, keeping their lights out so the Egyptian crew and their terrorist cargo would have no idea they were under escort.

In the meantime, the State Department in Washington asked Tunisia and other friendly littoral Mediterranean nations to deny landing rights to the terrorists.

After CDR Zia in “Tigertail 603” listened the landing clearance denials to the Egypt Air pilot, he understood that it was time for the Hawkeye crew to take charge.

“2843, this is Tigertail 603, over” CDR Zia radioed. After several more attempts at communications, the Egypt Air pilot finally acknowledged.

Zia continued: “Egypt Air 2843, you are being escorted by two F-14s. You are directed proceed to and land immediately at Sigonella, Sicily. Over.”

The Egyptian pilot was shocked. “Say again. Who is calling?” Allowing the pilot to believe he was talking with one of the F-14 pilots, Zia repeated, “This is Tigertail 603. I advise, you are directed to land immediately. Proceed immediately to Sigonella, Sicily. You are being escorted by two F-14 interceptor aircraft. Vector 280 Sigonella, Sicily. Over.”

The order was repeated once again before the F-14s turned on their external lights. The Tomcat crews watched as the excited Egyptian crew ran to both sides of the airliner to peer out the passenger windows. Zia now had the Egypt Air pilot’s attention.

Concerned by the close proximity of the Navy fighters, the nervous Egyptian pilot again came on the radio: “I’m saying you are too close. I’ m following your orders. Don’t be too close. Please.”

Since the Italian air traffic controllers vectored the 737 to land at the civilian field nearby Catania and refused the permission to land in Sigonella, the escorting F-14 commander declared a low fuel emergency and indicated the requirement for an immediate landing. But the presence of four F-14 Tomcats on his wing charged up the Egyptian pilot, who was able to land only after having going around on his first pass.

“Everyone breathed easier when he landed successfully on the second pass.” Brodsky says.

He also believed that even if the terrorists were taken into Italian custody once the mission ended, that fact did little to diminish the elation aboard the Saratoga: “The real reward, was the knowledge that they had helped bring terrorists and cold-blooded murderers of an American citizen to justice.” 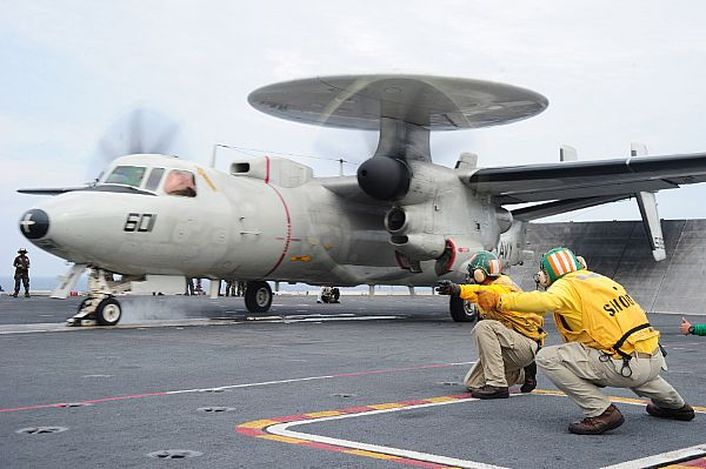