Known and unknown stories of a legendary F-8 Crusader and F-14 Tomcat pilot.

Even if the photo itself is already very interesting, the story behind it, is by far more fascinating. In fact, the naval aviator at the controls of the Tomcat can be considered a sort-of legend.

In this shot we see an F-15 Eagle locked by an F-14 Tomcat, with a separation of about 250 feet, with piper on the Eagle’s pilot, gun selected and master arm on. F-14 Pilot Joe “Hoser” Satrapa. #DCS #F14 #Tomcat pic.twitter.com/1vgroJtapc

As explained by Alvin Townley in his book Fly Navy, most probably other pilots have scored more kills, held higher ranks or more prestigious commands, but few living aviators embody the untamed nature of aviation like the one-of-a-kind legend known to decades of F-8 Crusader and F-14 Tomcat pilots: Joe “Hoser” Satrapa.

A skilled rifleman, Joe joined the Navy with the aim to fly a jet fighter.  His passion for guns guided him after the flight school graduation, in 1966, when he was called to opt for the F-4 Phantom or the F-8 Crusader. The Phantom had no guns and Satrapa thought: “No guns? What kind of aircraft is this with no guns?” and he immediately chose the “Last Of The Gunfighters” as the Crusader was dubbed by aircrews.

But the “Satrapa legend” began the day he was given the callsign “Hoser” (even if he is also known as “Da-Hose” or “D-hose”), during a mission at the gunnery range in which he was flying the tail position in a flight of four Crusaders. He cut off the preceding aircraft as they approached the target and started shooting from two thousand feet up, one and a half miles out, hosing off all his bullets in one pass.

His flight leader J.P. O’ Neill told him to return to the airfield at El Centro and the same night O’ Neill had the final say on the incident when he nailed Satrapa: “Lieutenant junior grade Satrapa, for hosing off all his bullets in one pass, will hence forth be known as Hoser. That’ ll be five bucks.”

Hoser was also widely known during the Vietnam War as a fearless F-8 pilot who regularly carried a good forty pounds of lethal ordnance, in case he was suddenly forced to eject from his aircraft and face an entire platoon of North Vietnamese Army regulars.

As explained by George Hall in his book Top Gun – The Navy’ s Fighter Weapons School, Hoser’s interest for guns continued when he transitioned to the F-14 Tomcat.

During the AIMVAL/ACEVAL (the Air Combat Evaluation/Air Intercept Missile Evaluation) fighter trials that put the F-14s and the F-15s against the F-5Es to test new weapons and tactics which took place from 1974 to 1978 at Nellis Air Force Base, Hoser (assigned to the VX-4 evaluators) was put in a 1 vs 1 against an F-5.

As the two combatants sat side-by-side on the Nellis runway, awaiting tower clearance for takeoff, Hoser looked over at his opponent, reached his hand up over the control panel, and mimicked the cocking of machine guns in a World War I Spad. A thumbs up came from the other cockpit, meaning that guns it would be, the proverbial knife fight in a phone booth, forget the missiles.

Both jets took off.

As soon as they reached the assigned area, the fighters set up twenty miles apart for a head-on intercept under ground control. Seven miles from the merge, with closure well over 1,000 knots, Hoser called “Fox One”, a Sparrow missile away, scoring a direct hit.

As they flashed past each other, the furious F-5 driver radioed, “What the hell was that all about?” “Sorry.” said Hoser, “lost my head. Let’s set up again. Guns only, I promise.”

Again the two fighters streaked towards the pass, again at seven miles Hoser called “Fox One.” The F-5 driver was apoplectic.

Hoser was first back to the club bar, nursing an end of the day cold one as the flushed Aggressor stomped in. “Hoser, what the hell happened to credibility?” the F-5 pilot asked. Hoser replied “Credibility is DOWN, kill ratio is UP!”

This story became very popular around Topgun, alongside the lesson learned: from 1 vs 1 to forty-plane furball, expect anything. But never expect your enemy to be a sweet guy.

Still, Hoser’s best experience during the AIMVAL/ACEVAL most probably came after the end of the trials. Even if Tomcat and Eagle drivers could not engage each other, Hoser and his RIO Bill “Hill Billy” Hill with  Dan “Turk” Pentecost and Frank “Fearless” Schumacher onboard the second F-14, went 2 vs 2 against a couple of F-15 instructors from 415th Training Squadron (415th Flight Test Flight).

Both Eagles were gunned down and a gun camera film which showed the F-15 locked in the F-14 HUD almost caused Japan to revert its decision to buy the Eagle. 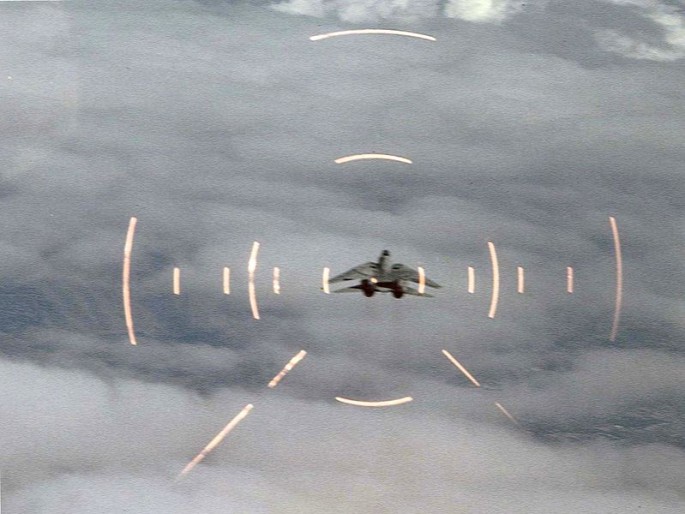 Photo: air-to-air with the Colombian Air Force Kfirs in the Nevada Test and Training Range during the Red Flag

The following exclusive image was taken by The Aviationist’s photographer Tony Lovelock during a flight on the Colombian B-767 from Nellis Air Force Base. It shows two Colombian Air Force Kfirs joining the tanker left […]