Developed in the late 1960s as a multi-mission fighter, the F-14 Tomcat’s mission was to protect U.S. Navy Carrier Battle Groups (CVBG) from raids conducted by the Soviet bombers armed with long-range cruise missiles.

On a typical sortie, the aircraft would keep a combat air patrol station located several hundred miles from the carrier. The loiter and radius advantage of the Tomcat were achieved thanks to its swept wings, which have been the greatest engineering challenge in F-14’s development, as explained to The Aviationist by a very special reader.

“One of the most distinctive and memorable features of the F-14 Tomcat was its variable geometry wings” says Dave “Bio” Baranek, author of the book Topgun Days: Dogfighting, Cheating Death and Hollywood Glory as One of America’s Best Fighter Jocks and a twenty-year experienced Tomcat Radar Intercept Officer (RIO).

Bio explains that the F-14’s wings were controlled by “a microprocessor known as the Central Air Data Computer (CADC) — world’s first microprocessor (designed and developed by Steve Gaeller and Ray Holt from 1968-1970 for the F-14A Tomcat).

As Baranek explains, the variable geometry wings brought several advantages to the Tomcat: “At their forward sweep position of 20 degrees (the angle of the wing leading edge), they allowed the F-14 to have a relatively low landing speed, an important consideration for safe operations from an aircraft carrier. As speed increased, they would automatically sweep back based on indicated Mach number (IMN) to a fully-swept position of 68 degrees, reducing drag for high speed flight” (and also to reduce wingspan for aircraft movement and storage – Bio told us that on the flattop’s deck the wings could be swept back to 75 degrees in a position called “oversweep”).

The F-14’s wings could also be manually swept, even if, according to Baranek, the Tomcat’s driver had to consider several factors since “The pilot could manually sweep the wings aft of the position determined by the CADC, but not forward of that position, as that could cause structural damage due to the tremendous lift it would generate. Manually sweeping the wings back could confuse an adversary by giving a false indicator of F-14 airspeed. But it also provided much less lift and less maneuverability, so it was a “tactic” or trick that would be used very carefully.”

This last statement is confirmed by Bio himself who recalled exclusively for The Aviationist, the tale of a Tomcat’s driver who forgot the wing swept aft in the middle of a furball in the F-14 simulator.

“One time in the F-14 simulator (the name of which was 2F112), we completed our planned work and still had time, so we were messing around. A very good pilot was flying, I don’t remember the RIO, and I was out at the control console. The pilot wanted to try to get out of flat spins by manually sweeping the wings aft. I don’t remember if it helped, but after he did it a few times we still had some time left, so he said, “Let me fight a MiG-21.”

The operator set up the simulator and they started a dogfight. After about two minutes, the pilot said, “Wow, this is the best MiG-21 I’ve ever seen, I should have killed him by now!”

Then I looked at a display that showed an external view of the F-14 and told the others at the control console: “Look, he still has the wings swept aft!” They couldn’t contain their laughter and told him, “Check your wingsweep!”  The pilot put the wings in Auto and the engagement ended soon after that with a kill by the Tomcat.”

Besides being a Naval Flight Officer, Baranek completed an assignment as Top Gun instructor at the Navy’s elite Fighter Weapons School (based at the then Miramar Naval Air Station), hence his chance to see how the F-14‘s swept wings could be used as an advantage during a real dogfight, also against more maneuverable aircraft.

In particular Bio recalls an episode involving a Naval Aviator flying his 1 vs 1 Graduation hop against a Top Gun instructor flying a very particular adversary aircraft.

Before telling the story, Baranek explains how a typical 1 vs 1 Graduation flight took place: “For the “Graduation 1 vs 1″ flight in the Top Gun class, instructors arranged for students to fight an aircraft whose identity would be unknown until merge plot.

Everyone briefed against everyone, so it was legal. This was in the 1980s, and students didn’t know if they were going against an A-4, F-5, or something else. The set up was a 30-mile intercept, so you discovered the identity of your opponent when you could visually ID him, maybe 4-5 miles before the merge.

To keep things interesting they sometimes arranged for an outside aircraft, such as a QF-86 from the Pacific Missile Test Center that would be flown by a live pilot for the event.”

In the second half of the 1980s the Hornet drivers alongside with their then new F/A-18s, began to join Topgun classes and some of them believed they had a huge advantage over the bigger Tomcat during a real air-to-air engagement.

“Around 1987, an F/A-18 pilot went through the Topgun class, and he kept trash-talking F-14s. He called them “interceptors” and bad-mouthed them at every opportunity,”  says Bio.

“Most instructors at this time had been F-14 pilots and RIOs, and they decided to teach him a lesson. So they had a former instructor participate in the Graduation 1 vs 1 secretly, and he was flying an F-14A.  This Hornet pilot went out for his 1v1 flight, ran the intercept, and as he approached the merge saw an F-14 with wings fully swept.

Following this first engagement “To get max training benefit from the opportunity they followed up with a regular one” but as Baranek recalls “the story was a big hit around Miramar, which of course was home to West Coast F-14s. It also reiterated one of Topgun’s main teaching points, which is credited to the Red Baron himself: “It’s not the crate, but the man sitting in it.” 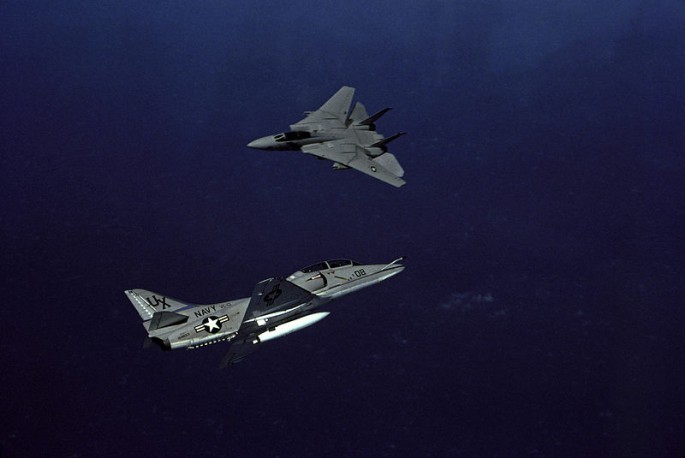 Persian Tomcat and Russian Bear fly together during a strike mission against ground targets in Syria. Something really interesting details have been exposed by the material released by Russia’s MoD lately. Indeed, as you can […]

Snodgrass was the sole occupant of a SIAI-Marchetti SM.1019 that crashed at Lewiston-Nez Perce County Regional Airport. The legendary F-14 Tomcat pilot Dale “Snort” Snodgrass, the type’s most experienced pilot, tragically lost his life on […]

Developed in the late 1960s to protect US Navy Carrier Battle Groups (CVBG) from the raids conducted by the Soviet bombers armed with long-range cruise missiles, the F-14 was the best fleet defender thanks to […]