The stunning image in this post will probably remind our readers the famous scene of Top Gun (when Maverick buzzes the tower with his F-14 Tomcat during a high speed flyby):

Maverick: “Tower, this is Ghostrider requesting a flyby.”
Tower: “Negative Ghostrider, the pattern is full.”
Goose: “No no, Mav this is not a good idea.”
Maverick: “Sorry Goose, but it’s time to buzz the tower.”

But the true story behind the above picture is quite different. In fact, this photo was taken on the 1988 Dependents’ Day Cruise of the USS America (CV-66) and the F-14 Tomcat driver who performed this incredible super low, super close pass is Dale “Snort” Snodgrass, a pilot who has become synonymous of Tomcat.

Grown up in Long Island, Dale’s dad was a test pilot and “Snort” set a new standard within the naval aviation program becoming the first flight school graduate to be selected for the newly formed F-14 pipeline, as explained by Snodgrass himself in the book Grumman F-14 Tomcat Bye-bye, Baby…! :

“I was the first ensign to complete day/night Tomcat quals, right out of flight school. I was rewarded with the privilege of picking up a brand-new Tomcat at the factory for delivery to the west coast. To make the flight truly historic we stuck another ensign in the RIO (Radar Intercept Officer) seat.”

Before arriving at Naval Air Station Miramar, Dale and his RIO made a fuel stop at Luke Air Force Base: “We’d let the Air Force get a close-up look at the Tom. We were the first F-14 ever seen at that huge base. A general came to greet us at the VIP parking ramp. Luke was scheduled to receive its first F-15 Eagles the next day. At that time no one under the rank of O-4 major had flown the Eagle. Let’ em get a load of a real fighter, Navy style! The final flight over to Miramar was short, so we whacked the Air Force a final time with a sunset takeoff. Zone V (which was the maximum afterburner thrust setting for TF-30 engine) burner to 20,000 feet and still over their runways! The departure controller watched in amazement and then asked our aircraft type. My RIO responded, “We’re an Eagle Eater, Baby…!”

In the Navy, Dale amassed more hours in the F-14 than any other pilot, and he is considered the “highest time Tomcat pilot”, with over 4,800 hours and more than 1,200 arrested carrier landings and for 14 years he has flown F-14 demos that people still talk about today.

Dealing with the low pass over the USS America, “Snort”, at the time Executive Officer (XO) of VF-33 Starfighters, released this interview to John Sponauer:

“It’s not risky at all with practice… It was my opening pass to a Tomcat tactical demonstration at sea. I started from the starboard rear quarter of the ship, at or slightly below flight deck level. Airspeed was at about 250 knots with the wings swept forward. I selected afterburner at about ½ miles behind and the aircraft accelerated to about 325-330 knots. As I approached the ship, I rolled into an 85 degree angle of bank and did a 2-3 g turn, finishing about 10 – 20 degrees off of the ship’s axis. It was a very dramatic and, in my opinion, a very cool way to start a carrier demo. The photo was taken by an Aviation Boson’s Mate (by an ABE3 who was the petty officer of third class Sean E. Dunn that was in charge in Launching & Recovering Equipment) who worked the flight deck on the USS America. Just as an aside…the individual with his arms behind his back is Admiral Jay Johnson” who became the Chief of Naval Operations for the Navy.”

At this point one question may raise: was the tactical demonstration well performed the day after this training? Take a look at the photo and judge by yourself.

By the way, the image on top is the one of the flyby, the one here below depicts the rehearsal.. 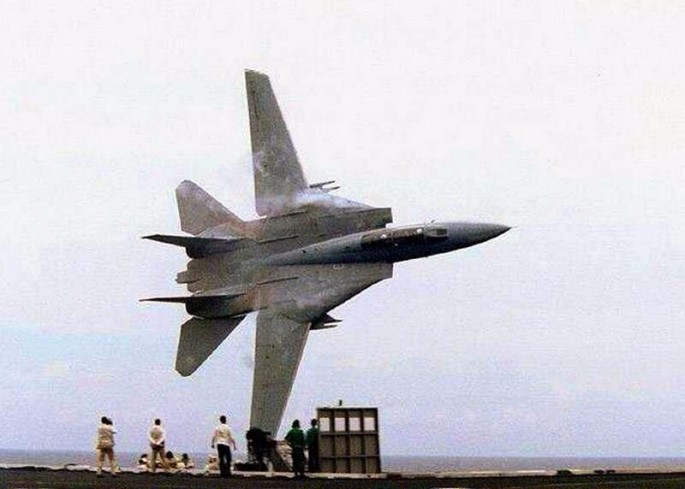 The live fire event is the first in a series of development test events that will ensure AARGM-ER can meet required objectives as it is about to enter Low Rate Initial Production. The U.S. Navy […]