These things happen once every some million flights.

The KA-6D was a tanker version of the A-6 attack aircraft obtained by converting existing Intruder airframes: radar and bombing equipment were removed and replaced with an internal hose-and-reel refueling package, with the drogue fairing protruding from underneath the rear fuselage.

A total of 90 KA-6Ds were produced by Grumman for the U.S. Navy.

One of the most famous events that involved a KA-6D during its operational life spanning from 1963 to 1997, took place on Jul. 9, 1991 to a VA-95 Green Lizard Intruder during an aerial refueling mission overhead its aircraft carrier, the USS Abraham Lincoln (CVN-72).

On that day, Lt. Mark Baden and Lt. Keith Gallagher, who were the pilot and the bombardier and navigator (BN) of the Intruder “Lizard 515”, experienced a very unusual incident: a partial ejection from the aircraft. Both the crew members released their accounts of the mishap to Approach Magazine in November 1991 and the full story is today reported on www.gallagher.com.

Gallagher himself explains: “Murphy’s Law says, “Whatever can go wrong, will, and when you least expect it.” (And, of course, we all know that Murphy was an aviator). […]  Fortunately for me, however, he failed to follow through. On my 26th birthday I was blindsided by a piece of bad luck the size of Texas that should have killed me. Luckily, it was followed immediately by a whole slew of miracles that allowed me to be around for my 27th. We were the overhead tanker, one third of the way through cruise, making circles in the sky. Although the tanker pattern can be pretty boring midway through the cycle, we were alert and maintaining a good lookout doctrine because our airwing had a midair less than a week before, and we did not want to repeat.”

After the third fuel update call, Lizard 515 aircrew decided that the left outboard drop was going to require a little help and as recommended by NATOPS (which is The Naval Air Training and Operating Procedures Standardization program, responsible for rules and regulations governing safe and correct operation of all naval aircraft), they applied positive and negative Gs to force the valve open.

As explained by Gallagher, when the pilot moved the stick forward: “ I felt the familiar sensation of negative “G”, and then something strange happened: my head touched the canopy. For a brief moment I thought that I had failed to tighten my lap belts, but I knew that wasn’t true. Before I could complete that thought, there was a loud bang, followed by wind, noise, disorientation and more wind, wind, wind. Confusion reigned in my mind as I was forced back against my seat, head against the headrest, arms out behind me, the wind roaring in my head, pounding against my body. “Did the canopy blow off? Did I eject? Did my windscreen implode?” All of these questions occurred to me amidst the pandemonium in my mind and over my body. These questions were quickly answered, and replaced by a thousand more, as I looked down and saw a sight that I will never forget: the top of the canopy, close enough to touch, and through the canopy I could see the top of my pilot’s helmet. It took a few moments for this image to sink into my suddenly overloaded brain. This was worse than I ever could have imagined – I was sitting on top of a flying A-6!”

The sensations experienced by Gallagher during this wild ride were extreme: “I couldn’t breathe. My helmet and mask had ripped off my head, and without them, the full force of the wind was hitting me square in the face. It was like trying to drink through a fire hose. I couldn’t seem to get a breath of air amidst the wind. My arms were dragging along behind me until I managed to pull both of them into my chest and hold them there.”

While he was still trying to breathe, Gallagher thought that Baden would never have tried to land and he decided to start the ejection sequence once again: “I grabbed the lower handle with both hands and pulled-it wouldn’t budge. With a little more panic induced strength I tried again, but to no avail. The handle was not going to move. I attempted to reach the upper handle but the wind prevented me from getting a hand on it. As a matter of fact, all that I could do was hold my arms into my chest. If either of them slid out into the wind stream, they immediately flailed out behind me, and that was definitely not good.”

In the meanwhile, Baden contacted the aircraft carrier: “Mayday, Mayday, this is 515. My BN has partially ejected. I need an emergency pull-forward!”

Baden switched to the UHF frequency preset on Channel 6 and said “Boss (the Air Officer who has to rule the flight deck), this is 515. My BN has partially ejected. I need an emergency pull-forward!”

The Boss replied: “Bring it on in.” At this point Baden looked at his BN’s legs still moving and understood that Gallagher was not dead. So when the Boss came up and asked if the BN was still with the aircraft, Baden replied “Only his legs are still inside the cockpit.” Fortunately, the Boss understood what Baden meant and asked him if he was heading to the aircraft carrier for landing. When Baden confirmed he was returning to “homeplate,” the Boss told him that the aircraft carrier was ready to recover Lizard 515.

But Gallagher’s conditions were really frantic: “The wind had become physically and emotionally overwhelming. It pounded against my face and body like a huge wall of water that wouldn’t stop. The roaring in my ears confused me, the pressure in my mouth prevented me from breathing, and the pounding on my eyes kept me from seeing. Time had lost all meaning. For all I knew, I could have been sitting there for seconds or for hours. I was suffocating, and I couldn’t seem to get a breath. I wish I could say that my last thoughts were of my wife, but as I felt myself blacking out, all I said was, “I don’t want to die.”

While Baden headed to the USS Abraham Lincoln, he thought that he didn’t want to perform a perfect landing (the footage of which can be seen in the video below): “I had no intention of passing up any “perfectly good wires.” I touched down short of the 1-wire (the perfect carrier landing is dubbed OK 3 and it took place when the pilot engages the third of four wires placed on the carrier deck) and sucked the throttles to idle. The canopy shards directly in front of the BN’s chest looked like a butcher’s knife collection. I was very concerned that the deceleration of the trap was going to throw him into the jagged edge of the canopy.” Then after the landing Baden realized that Gallagher was still alive when he said: “Am I on the flight deck?” 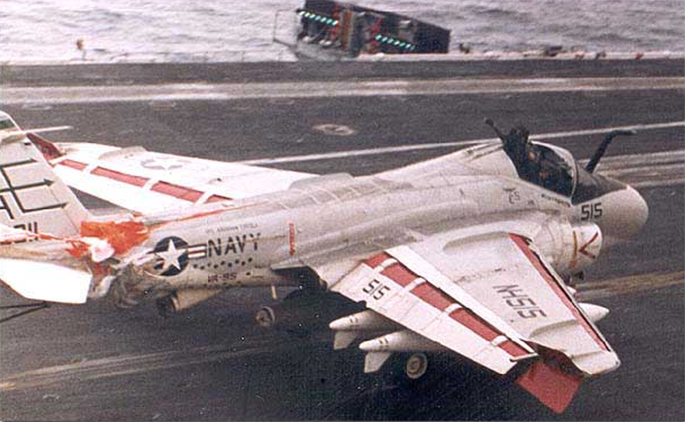 When Baden and Gallagher knew what really happened, it became obviously how much the Intruder BN had been lucky.

Gallagher’s parachute had deployed and wrapped itself around the tail section of the plane then the timing release mechanism had fired and released the BN from the seat. The only things holding him attached to the plane were the parachute straps.

For this well executed emergency landing Lt. Mark Baden was awarded the Air Medal for his decisive action on that day and the LSO (Landing Signal Officer), LCDR Mike Manazir, received the “Bug Roach Paddles Award” for his part in the recovery.  The crew of the Lincoln was recognized for a well-executed emergency pull-forward – LT Baden had the jet on deck about six minutes after the emergency began. 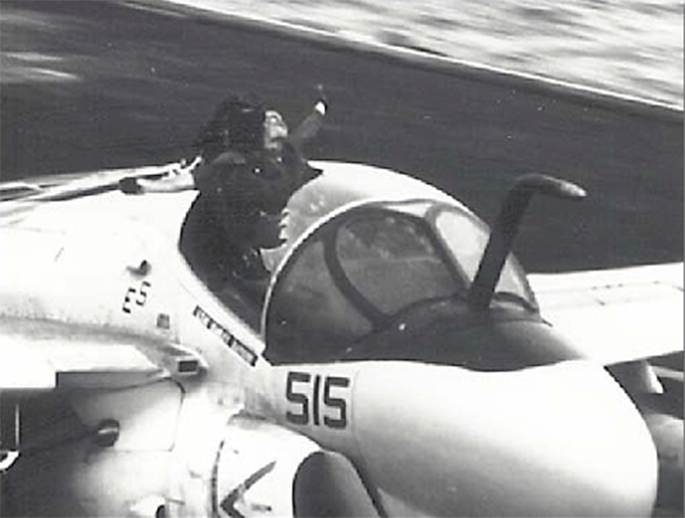 The Captain of the Lincoln would later read over the PA system, a portion of a letter written by Michelle Gallagher (LT Gallagher’s wife) where she thanked the crew of the Lincoln for saving her husband’s life, while the injuries suffered by the BN were later described by Gallagher himself: “My most serious injury was that 1/2 my right arm (the shoulder, bicep, and forearm) was paralyzed due to a stretched nerve in my shoulder. In addition, my left shoulder was damaged as well. I have all of the damage of someone who dislocated his shoulder, but it was not dislocated when I landed. My supposition is that it dislocated, and popped back in upon landing. Other than that, I was just extremely beat up. Via physical therapy, I recovered within 6 months. My right shoulder “came back” in about 1 month, my forearm in about 2-3 months, and my bicep returned in about 4-5 months. I had to re-do all of my physiological qualifications (swimming, etc) to prove that I was OK, but I flew again 6 months to the day after the accident.”

Here is a nice compilation of Fulcrum flight deck operations. In 2013, Russian Mig-29K fighter jets performed testing aboard Indian Navy aircraft carrier INS “Vikramaditya”. The “new” aircraft carrier dates back to 1987, when it […]