Although the battlefield is deadlocked, with fightings taking place more or less in the same manner at Misratah and other disputed cities along the northern Libyan coastline, with NATO being unable to prevent, for various reasons, Gaddafi’s forces to bomb civilians with rockets, heavy artillery and also cluster bombs.

From its point of view, NATO has kept up a high operational tempo. NATO Spokesperson, Oana Lungescu said:

Allied aircraft have flown well over 2.800 missions — an average of just over 1.000 a week. Almost half of them strikes. We have struck a broad range of targets — tanks and rocket launchers, armoured vehicles and ammunition sites. We are keeping up the pressure on the Gaddafi regime forces to stop their brutal onslaught against civilians. It’s a challenging task — but we are making significant progress in weakening Gaddafi’s ability to use his military machine against his own people.

That operational tempo has been matched by a high political tempo. Last week, as you know, NATO foreign ministers met in Berlin with our operational partners and reinforced the political impetus behind Operation Unified Protector. They re-stated full support for the mission. They committed to providing all the resources needed to do the job. And they agreed that they will do so until all attacks on civilians have stopped; until all of Gaddafi’s forces, including his snipers, mercenaries and paramilitary forces have returned to bases; and until there is full, safe and unhindered humanitarian access to all people in need of assistance.

So NATO and its partners are united, we are determined, and we are focused. We are doing what the UN has mandated — and we will continue to do so, for as long as it takes.

Gen. van Hum, chief of Allied Operations at SHAPE, explained that the arms embargo is comprehensive and effective. Since operation started NATO has checked 432 vessels and boarded 10 for further inspection and found no violations. Dealing with the NFZ, there were no violations from fixed wing aircraft since last week (does this mean that some violations from rotary wing assets occurred?). For what concerns the activities aimed at protecting civilians on the ground, the battlefield is “fluid, dynamic and always changing”. NATO is not only operating in Misratah, Zintan and Ajdabiya but across all Libya. It is currently hitting Command and Control facilities of the regime including communication infrastructures. Over the last 36 hours beginning on Sunday evening these communication nodes were the focus of a coordinated series of strikes aimed at degrading Gaddafi’s ability to command and direct with his forces. Still, nothing indicates that Gaddafi has any intention of disengaging from operations as his forces continue to use heavy weapons against civilians. Therefore NATO will continue with the air strikes.

In Misratah, NATO has been watching the situation over the past 10 days: “On the ground the situation fluid. The regime force have been indiscriminately rocketing and shelling the city causing widespread damages. The sea port was closed a few times due to repeated shelling and fighting in the area. Our forces have conducted numerous strikes against Gaddafi’s forces in and around Misratah. We have destroyed over 40 tanks and several armoured vehicles. In addition several anti-aircraft system were destroyed enabling our planes to operate more effectively in the area” he said. Allied pilots watched rocket launchers being used in the area to hit civilians and they destroyed them.

But there’s a limit to what can be achieved by air power to stop fighting in a city. We are taking every precaution to avoid causing civilian casualties by our own air ops. What we are doing is attacking regime’s ability to supply and sustain these attacks not just in the area of Misratah but across the country.

According to van Hum, there’s a good balance between enforcing the NFZ and interdicting the forces threatening civilians as the 1.200 air strike sorties represent over 40% of the total sorties flown.

Van Uhm said that the alliance has the necessary planes for the missions. He explained that there are planes constantly flying over Libya, day and night, gathering information about the forces on the ground and capable of directing other assets to strike them, when need. Furthermore, without going into specific details, he said that NATO already has “more assets” than last Friday when NATO officials said the NATO mission is short of about 10 aircraft and at a meeting of alliance foreign ministers. He refused to comment why NATO is not currently using helicopters and naval firepower for Unified Protector, answering once again that NATO has the required assets to fulfil the mission.

So, NATO rejects critics by saying that it is maintaining a high operational tempo and affirming it has everything it needs to execute the air campaign, to target the Gaddafi’s forces and to attack loyalist second echelon forces. Sorties conducted on Apr. 18 were 143, comprising 53 air strikes which hit, among other targets, 9 ammunitions bunkers and the HQ of 32nd Brigade in the vicinity of Tripoli, 6 surface to air missiles, 4 tanks, 3 air defence missile sites and 1 mobile rocket launcher in the vicinity of Misratah, 3 ammunition storage bunkers in the vicinity of Sirte, 3 tanks, 1 anti-aircraft weapon system and 1 armoured vehicles, in the vicinity of Zitan, and 1 building near Brega.

Ok, nice. However, as an analyst I can’t but notice that the impact of such strikes hasn’t had the expected result so, maybe it’s time to change something.

1) Alvaro Muñoz-Aycuens (@Alvarito) sent me the following interesting update about the Spanish Air Force contribution to Unified Protector, with information released by the Ministry of Defense to get approval by congress to expand the mission for two more months.

Since the 19th of March to the 17th of April, the missions numbers are as follow:

The E/F-18M has made 45 CAP missions in which they have flown a total of 328 hours without the need to intercept any aircraft. The B707 tanker has done 22 missions and 134 hours, in all the AAR they have transferred a total of 453.000 liters of fuel to the F18 plus other alliance members.

The CAP mission lasst 4 hours, in which they operate in pairs on one of the 3 assigned CAP areas which according to the info involves 1 or 2 AAR. Meanwhile the B707 operations are almost daily on one single AAR area in which the missions last at least 6 hours. By a request of the NATO, because of the lack of tanker assets, they are going to add to the mission a C130 tanker. They say this doesn’t increase the spending assigned to the mission because of the reduction in CAP missions and will neither surpass the limits of assigned personnel which currently sits at 500 men. 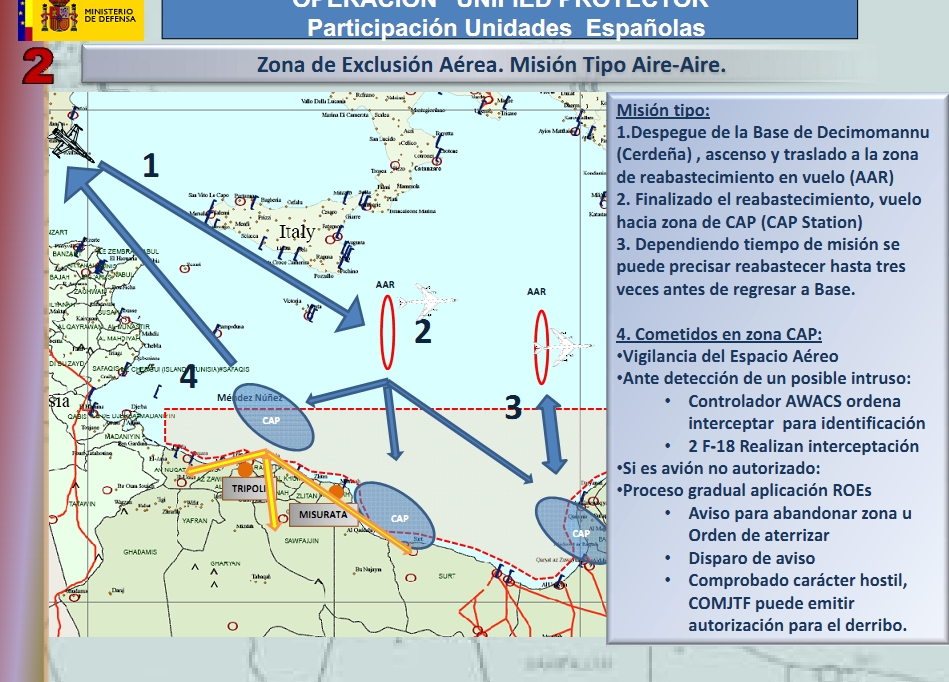 Regarding the naval blockade and the support of the CN.235 SAR plane, since its mission start on March 23 has flown 12 missions clocking a total of 66 hours identifying 14 ships. These operations account for 25% of all the maritime patrol operations of Unified Protector.

Officially the name of the operation/detachment is “Argos”. Also they have authorize the mission to support the future humanitarian missions requested by the UN.

2) Italian contingent flew 6 missions (2 acft each) in the last 24 hours: 2x Tornados, 2x AV-8Bs, 2x Typhoons. Eurofighter released on the company’s official website some interesting pictures about Italian and British Typhoons involved in Unified Protector (the one above, showing a RAF Typhoon taking off from Gioia del Colle comes from Eurofighter webpage too).

The one below was taken, in my opinion, at the beginning of Odyssey Dawn and not recently as it shows an ItAF Typhoon landing in Trapani with 4 IRIS-T and 4 AIM-120 and “only” 2 (not 3 as seen in the last weeks) drop tanks. 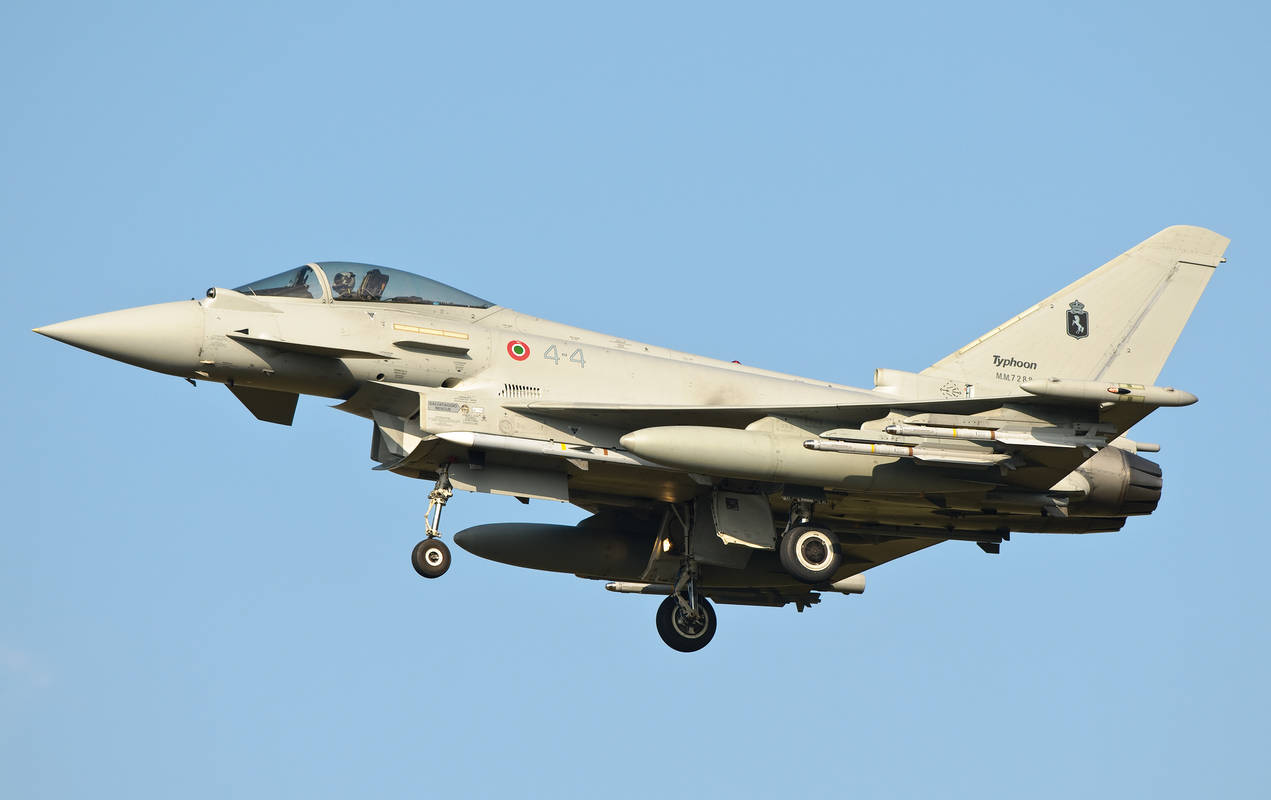 3) The following Reuter picture, depicting Libyan horsemen shouting pro-Gaddafi slogans as they parade during a welcome ceremony for the African Union delegation at Tripoli’s airport on Apr. 10, 2011, is particularly interesting because it shows the Bombardier BD-700-1A11 “5A-UAB” sitting on the apron at Tripoli International Airport. The fate and current location of this bizjet, presumed to be used by the Libyan Government and possibly by Gaddafi and his close aides for both “domestic” and international flight, was unknown. 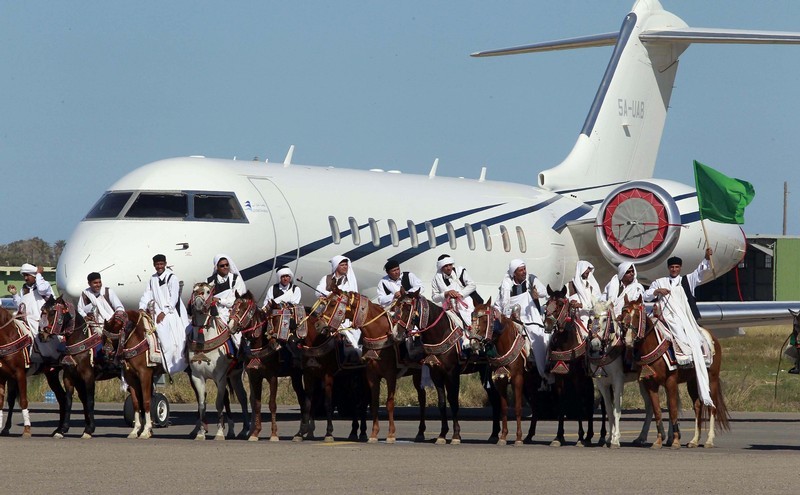 Yesterday, U.S. Air Force B-52s flew over the capitals of 30 NATO members. The mission was also an opportunity to take some great shots. On Aug. 28, 2020, four B-52H Stratofortress bombers, belonging to the […]

U.S. Air Force A-10 and F-15 Theater Security Package activities in Europe in one infographic

An interesting infographic provides some detail about the two TSPs in Europe. 12 A-10s belonging to the first Air Force Theater Security Package and 12 F-15s of the first ANG  TSP (theater security package) are […]