NATO is providing daily updates on the air campaign in Libya, merely providing the figures of the sorties since the beginning of the NATO operation (31 March 2011, 08.00GMT). So far, a total of 701 sorties and 276 strike sorties* have been conducted. Of those, 154 were flown on Apr. 3 (58 were air strikes). As always, strike sorties are those intended to identify and engage proper targets; do not necessarily imply the use of bombs for various reasons (lack of target identification, RoE, etc).

A quick comparison with Day 16’s data (read yesterday debrief for details) shows that the number of air strike dropped from 70 to 58 in the last 24 hours.

In the meanwhile, after an extensions requested by NATO, the US has withdrawn from Unified Protector its attack aircraft (not clear if planes will be kept for a certain period at the current forward operating bases or will return home). Here’s a statement released on this subject by Captain Darryn James, the director of the Pentagon’s Defense Press Operations:

– There have been no TLAMs [Tomahawk missiles] launched in the last 24 hours.

“- Between 6 p.m. Eastern and 6 a.m. Eastern this morning, one US Harrier [fighter jet] mission engaged military vehicles near Sert and one US A-10 [ground attack aircraft] mission engaged military vehicles near Brega as part of our commitment to protect the Libyan civilian population from attack and support NATO enforcement of UNCR [UN Security Council Resolution] 1973.

“Tonight, US military assets will officially shift to a support mode to NATO for Operation Unified Protector. As [US Joint Chiefs of Staff Committee Chief] Admiral [Michael] Mullen said during SASC testimony on Thursday, US strike aircraft will be available in ‘standby mode’ and could be made available after a specific request from NATO leadership.

“But as of 6 p.m. eastern time tonight, US aviation assets are expected to cease strike sorties and will remain on an alert status if NATO requests their support.” 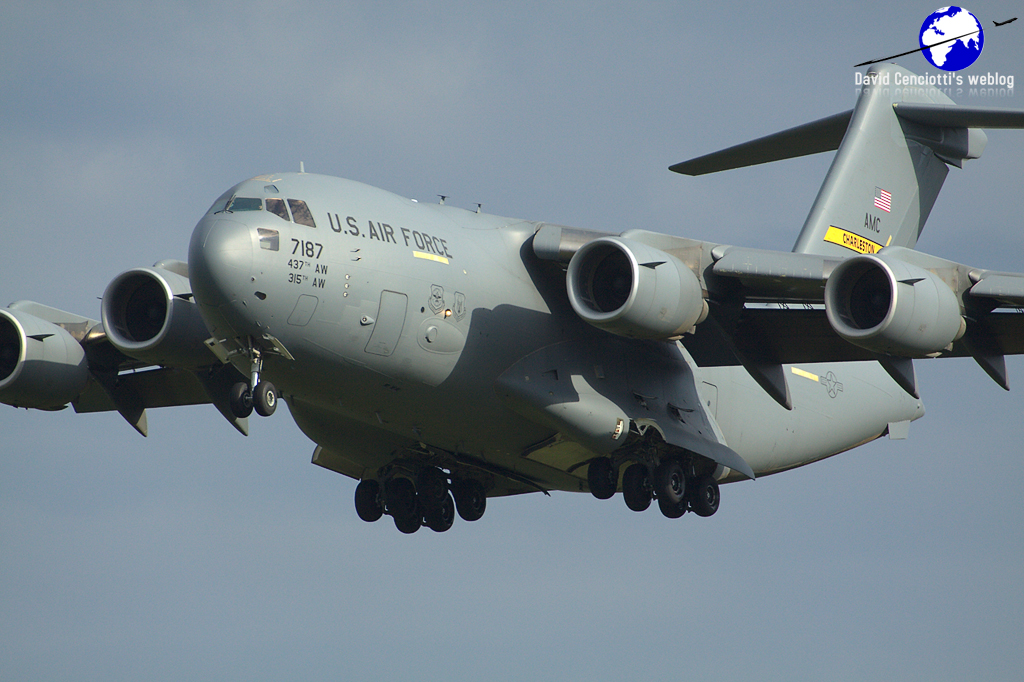 1) A total of 12 Turkish Air Force F-16s provided air cover to the aid ship M/F Ankara loaded with 2 tons of medical supplies and 3 ambulances and helthcare professionals, that was sent to Misratah to evacuate 230 wounded and 60 helpers bringing them in Turkey for further treatment. The ship, escorted also by a Turkish frigate, had been waiting off Misratah for 4 days, because the fighting in the city had prevented it to enter the harbour. A 12 hours cease-fire was agreed between the two opposing parts to make the evacuation possible. The TuAF aircraft took off from Bandirma and Dalama and were supported by 4 KC-135s from Incirlik airbase.

Italy will perform a similar humanitarian mission in the next days, said Italy’s Foreign Minister Franco Frattini, after meeting a representative of the opposition Transitional National Council. Frattini said that Italy will “fly” to Misratah, so it is possible that an air bridge will be arranged to rescue the wounded Libyans. However, since the airport is not controlled by the rebels, unless a cease-fire is agreed as happened during the Turkish rescue, it is likely that the Italian aid mission will be conducted by sea, with a close air cover.

2) An Italian radio ham recorded on Apr. 4 was seems to be the first counter-PSYOPS message sent by Gaddafi’s forces on HF frequencies. Here’s the message (in Arabic language only): http://soundcloud.com/iw0hk/8500-khz-libyan-radios. Initially, someone said it was a Free Libya radio transmission, but, according to those who translated the message after the news spread on the web, affirmed that it speaks about rebels embracing the “crusaders” and welcoming “people who drew cartoons of muhammed”. The message should be trasmitted from Sabratah, a Gaddafi’s held area to “rebel held areas”.

If it is really a pro-Gaddafi message (or a sort of counter-PSYOPS speach), it is at least weird that it was not jammed by the US EC-130Hs operating in the area.

3) Noteworthy, some of the air forces that are not taking part to the air strikes operating only for the enforcement of the No-Fly Zone, are flying with air-to-air missiles and also Litening Targeting pods or Reccelite reconnaissance pods. Maybe they use it to have a clearer view on the ground while performing Combat Air Patrols over Libya. SpAF and RNlAF are among them.

4) Information about each partecipating force’s activity is becoming scarcer each day. A Media Day was held on Apr. 4 by the Danish contingent in Sigonella, some pictures and details are published by the French MoD but some air forces are not providing any information at all. The RNlAF and Spanish detachments to Decimomannu have been some of the less talkative. The RNoAF flew 30 missions in total, 16 of those under NATO command. During the last day “ground targets were engaged”. The RDAF flew 4 more missions (dropping 4 PGMs) on Apr. 3, while in the Italian Air Force flew 8 missions: 3 by F-2000 Typhoons, 3 by Tornados and 2 by AV-8B+ from Garibaldi aircraft carrier. AAR capability was ensured by both KC-130J and Tornado IDS.
Dealing with the French, on the evening of Apr. 3, recon missions involving Rafales, Mirage 2000s and joint formations made by Rafale and Super Etendard, supported by a Rafale with buddy tanker for AAR, were flown. A recce mission, involving Rafales from Charles De Gaulle aircraft carrier was flown. On Apr. 4, 2 Mirage 2000D missions and 2 mixed Rafale / Super Etendard missions were flown, along with a Rafale reconnaissance mission, in the regions of Sirte and Ras Lanuf, with supporting C-135, E-3F, E-2C and 2 Rafales with refueling pod. From Souda Bay, 3 missions in standard “configuration” (1 French + 1 Qatari Mirage 2000-5) were flown.

The RAF will deploy 4 more Tornado GR4s from IX (B) Squadron of RAF Marham to Gioia del Colle, bringing to 22 the number of UK fast jets taking part in Unified Protector. The news came from PM Cameron who made a surprise visit to the Italian airbase which has been the temporary home for the last two weeks for 10 Typhoon fighters and eight Tornados. So far, the RAF aircraft have completed over 70 combat sorties over Libya and, during the last weekend, the British planes destroyed three regime tanks and 10 armoured vehicles
UK’s PM visit came on the day when the head of the RAF, Air Chief Marshal Sir Stephen Dalton, planning at least 6 months of operations over Libya, warned that the RAF will need ”genuine increases” in budget in the next years, after suffering the 8% cut imposed in last year’s SDSR, if it is to continue running the current range of operations.

The arrival of the Tornados will help ease pressure on the international coalition from the US decision to withdraw its planes, however, in my opinion, the problem is not the number and type of aircraft in the area, but how and where they are tasked. 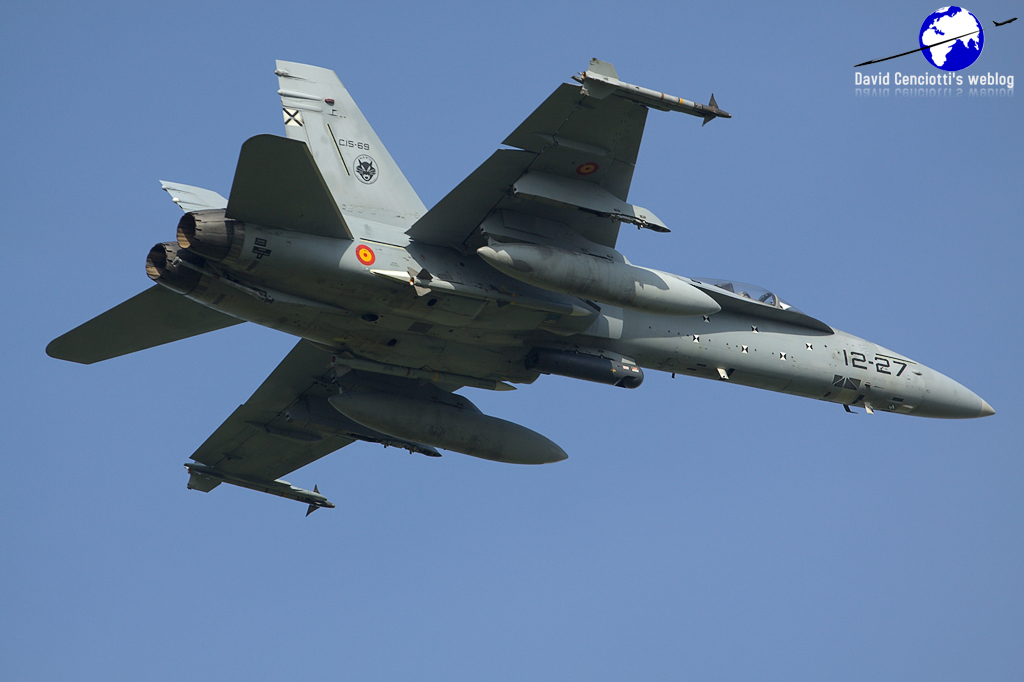 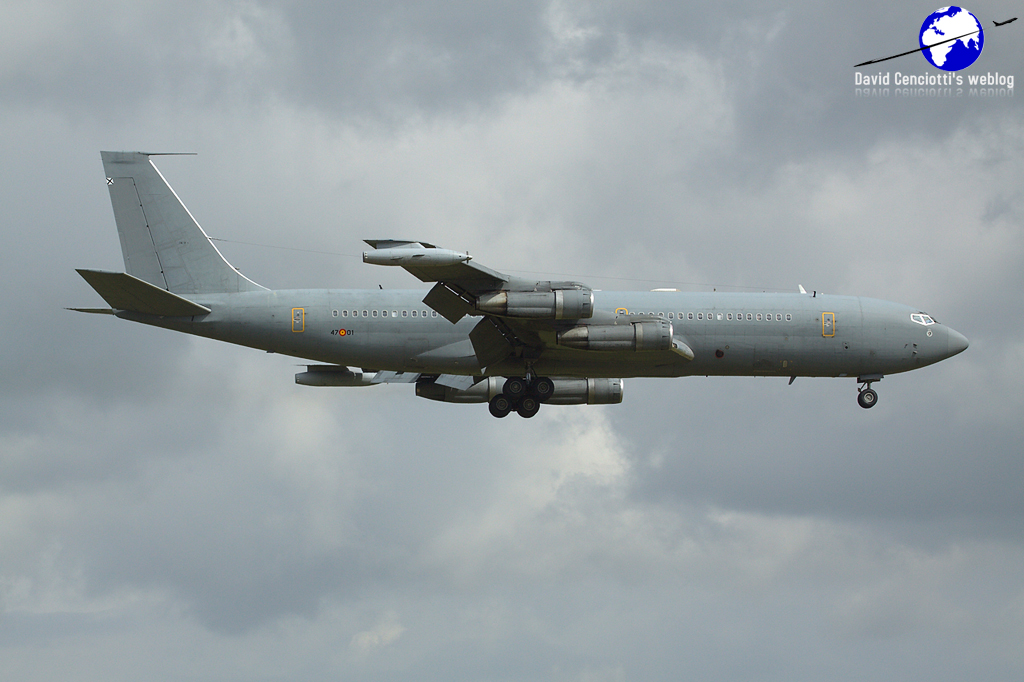 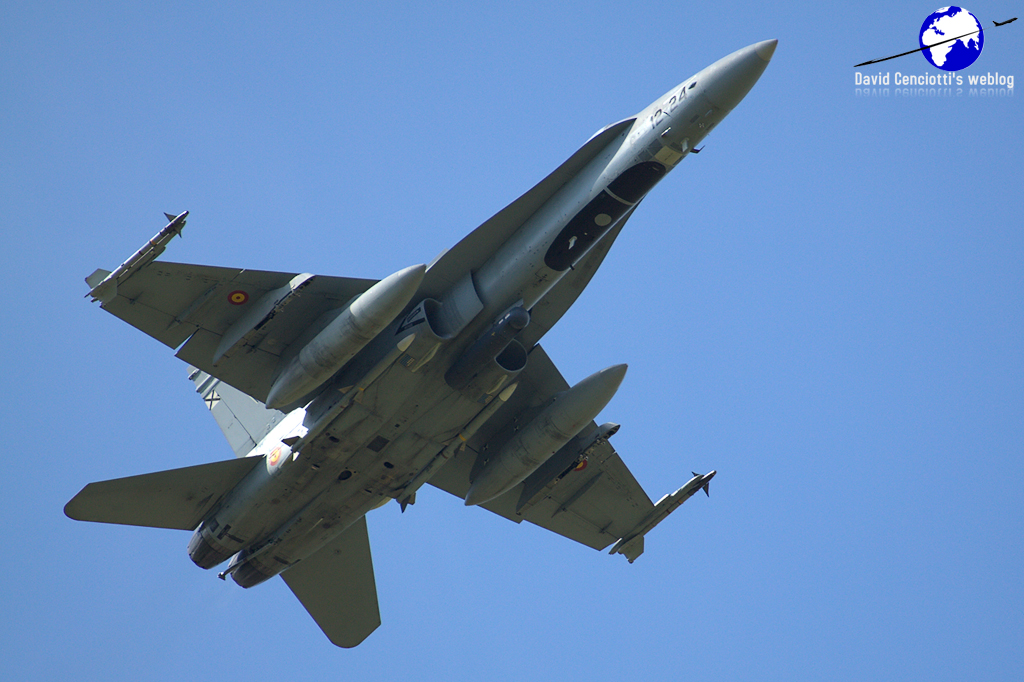 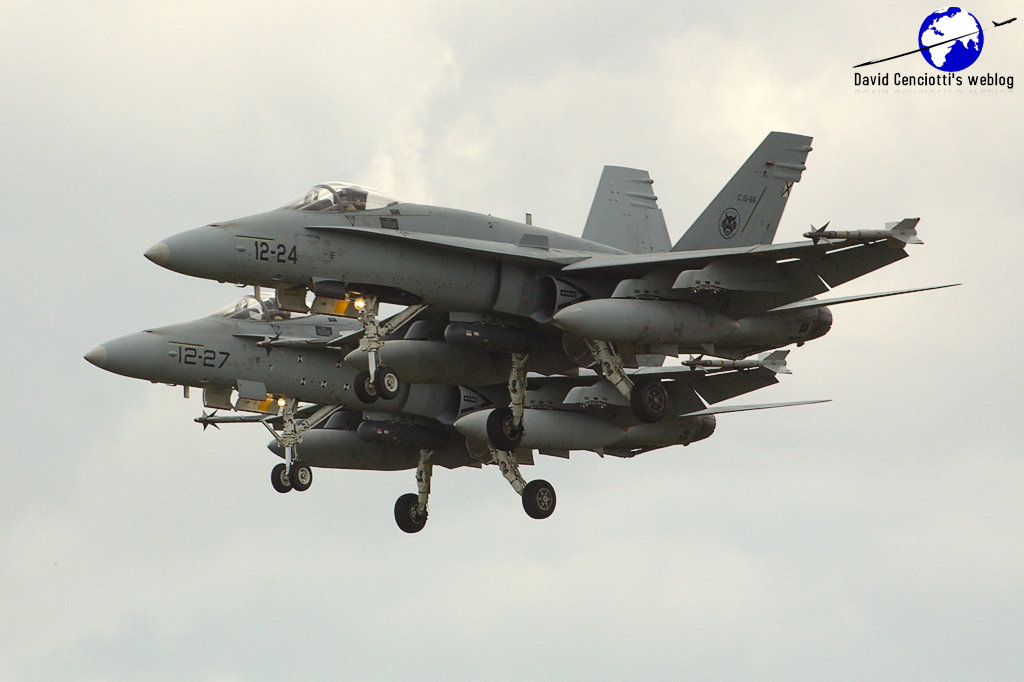 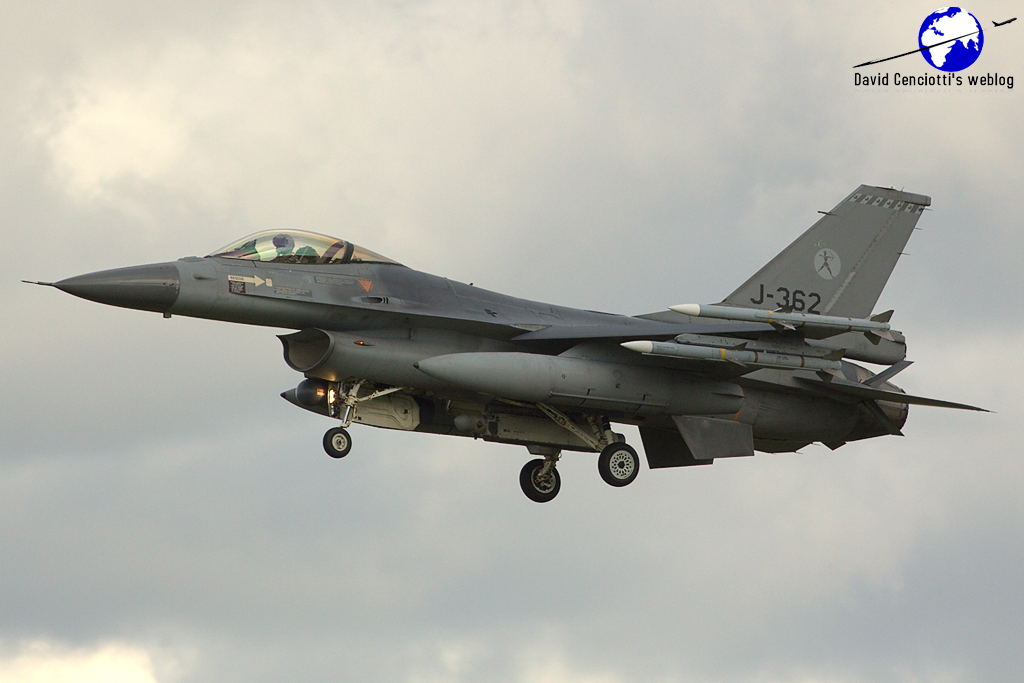 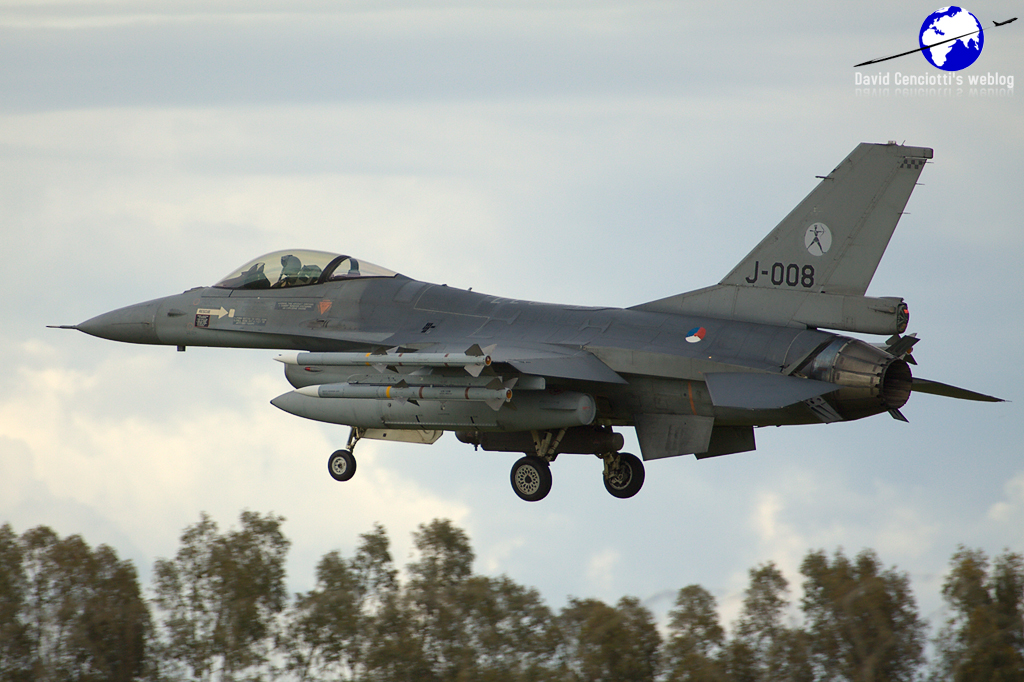 5) The following famous picture of the wreckage of a Su-24MK downed by the rebels during the Libyan uprising shows an interesting detail: the LAAF text. The official English acronym of the Libyan Arab Republic Air Force, should be, LARAF. However the official badge of the 1124Sqn has the shorter version LAAF for Libyan Arab Air Force. Noteworthy, even Sqdn, the short form for Squadron, refers to the English language. 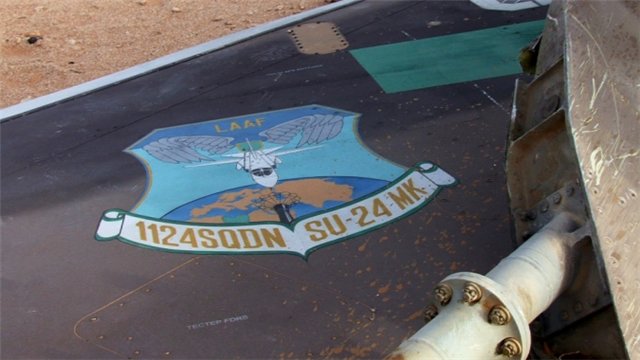 On Feb. 2, the following formation was seen overflying Pratica di Mare airbase. Even if the aircraft involved can fly at the same speed without particular problems, it is quite unusual to see an helicopter […]

On Jun. 26, NATO held a meeting of its 28 members at the request of Turkey under article 4 of the Washington treaty following the downing of the Turkish Air Force RF-4E Phantom by a […]