With Libyan known SAM sites and air defence installation rendered harmless, Odyssey Dawn missions see the coalition planes focusing mainly on targets of opportunity, as the regime’s armored forces and mechanized troops outside Ajdabiyah, a city located to the south of the rebel stronghold of Benghazi were British and French planes were involved in repeated attacks on the Gaddafi forces on the ground in the early hours of Mar. 25. Some information on this strikes that are worth explaines since they give an idea of the type of missions flown by the UK forces in theather with the available assets, were provided by the UK MoD briefing by Major General John Lorimer, the Chief of the Defence Staff’s Strategic Communications Officer. 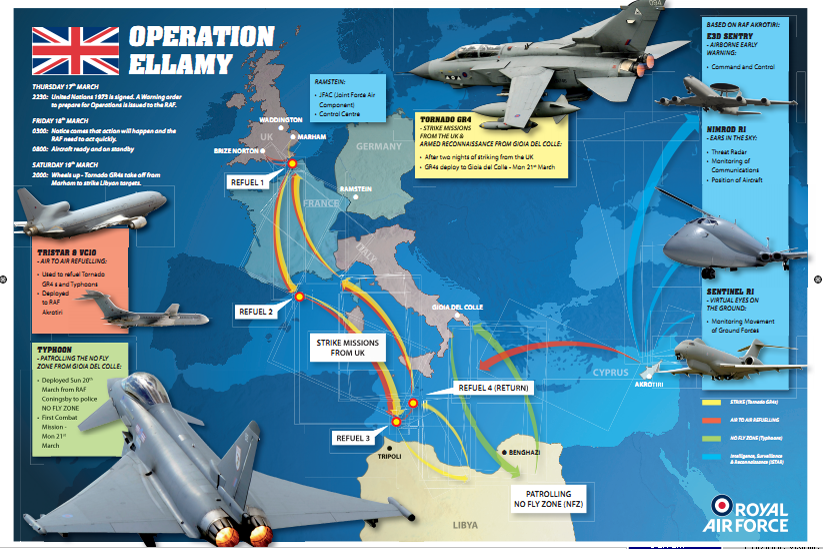 After conducting some long-range bombing missions to hit pre-planned targets (see previous reports), this was the first time that a flight of 2 Tornado GR4s, belonging to the 906 Expeditionary Air Wing (the sizeable force of both GR4s and Typhoons assembled at Gioia del Colle), was ordered to hit some forces on the ground. The mission, using the UK MoD words, was an example of flexibility, because, while Typhoons, supported by an E-3D AWACS, secured the airspace, a flight of 2 GR4s on combat patrol near Adjabiya, equipped with Litening targeting pods and PGMs (Precision Guided Missiles) attacked loyalist ground forces. They could exploit intelligence data gathered on target locations from images previously collected by RAPTOR (Reconnaissance Airborne Pod for Tornado) and using this they were able to identify a group of Libyan T-72 tanks on Adjabiya. Their highly accurate attack with Brimstone missiles hit three of the tanks, completely destroying them. The Brimstones, at their operational debut, are anti-armour fire-and-forget missiles developed by MBDA, which are loaded with targeting data by the Weapon Systems Officer and used a millimeter wave (mmW) radar seeker with a semi-active laser (SAL) to be guided to the target with final guidance provided by either the launching platform or another plane.

Let’s return to the Day 7 mission.
The Tornados were low on gas after the first attack so they handed the target over to another coalition patrol (most probably the French one, since France claimed similar successes in the same area on Day 7), which then attacked with LGBs and hit another three tanks. After having refuelled from an Royal Air Force VC10 tanker aircraft, the GR4s then returned to assess the results of the combined attacks. They were able to indentify another tank and once again they successfully hit it with Brimstone missiles.

The RAF strike was an interesting demo of the “highly agile use of air power”. However it let us think also at how “selfish” coalition partners have been in Odyssey Dawn. “Consensus bulding” and “branding” aside it looks like all the involved airforces are sharing the battlespace, each one doing his own job without a real joint effort. For example, each air force is using its own tankers instead of sharing effort and resources with other partners: so far I’ve never heard of a Spanish Hornet refueling from a RAF VC-10 or a CAF CF-18 refueled by a French C-135 and so on. Most probably it is just a matter of comunication (since there’s an interest to showcase its own aircraft, pictures of cross-refuelings are more rare) but as far as I know tanker sharing is not as it could be. Each partecipating nation is coordinating its activity with other partners but it is managing it “nationally”. This had an impact also on choices made by the single air forces. Yesterday I explained that the Italian Air Force was not using the more modern and capable Typhoons to escort the Tornado ECRs into the Libyan airspace, because, lacking available tankers (before the KC-130J of the 46^ Brigata Aerea was deployed) the F-2000s in the required air-to-air configuration, considering the combat air patrol loitering times, were unable to perform round trips from Trapani.

That’s why NATO take over is paramout to rationalize the forces and maybe also to decongest the airspace from many different tankers, each one waiting for its fellow countrymen (at least I firmly want to believe that E-3s are serving all the coalition planes and there’s no need for 3 AWACS when RAF, USAF and FAF planes are almost contemporarily striking targets inside Libya…..). Needless to say, the only contingent that is providing unique capabilities in large quantities (in spite of the low profile…) is the US one with EW, SIGINT, JSTARS, CSAR, SEAD assets that can do the difference. A significant support to the Odyssey Dawn is also provided by the ItAF, whose above Tornado ECRs, as often explained in the previous debriefs, are providing extremely important SEAD capabilities to the coaltion.

1) French forces heavily hit Al Jufrah airport “an historical base of the Libyan army”. Collateral damages in this case could not be ruled out, a French official explained.

2) Mobile radar sites were hit in the Tripoli area and it is interesting to notice that the Pentagon confirmed the use of 16 more Tomahawk strikes against targets including Scud missile garrisons. During the previous 24 hours, coalition flew 153 sorties, 96 of which were strike. NFZ sorties were all flown by coalition planes. During the usual press briefing Adm. William E. Gortney explained that the entire operation has 3 core tasks: arms embargo, No-Fly Zone and protect civilians (that theu interpret as attacking ground forces). NATO has already assumed the lead for maritime embargo mission, it will assume command of no-fly zone ops in few days leaving the third mission, civilian protection, in the US hands until NATO will be read to step over. Canadian Air Force Lt. Gen. Charles Bouchard was named to lead Operation Unified Protector from the Allied Joint Force Command in Naples, Italy. Noteworthy, Gortney confirmed the use of Special Operations EC-130s Compass Call and Commando Solo, transmitting messages in Arabic and English, asking regime military not to “defect” but to stay in place and don’t follow orders of regime: “Any time we can create confusion between leadership and forces in the field, we seek to do that”.

3) Daily activities of the ItAF aircraft, once available only by means of spotters resources, forums, websites, messageboards, are currently available on the online newspapers and agencies, providing a full coverage of the missions flown including take off time, number of involved aircraft and other details the local reporters are able to gather visually (armed, unarmed, Special Colour example, north bound, etc.). Interestingly by means of this OSINT activity the news of the arrival of the German Oker (A53) spyship to Cagliari around 10.50 GMT is in the Public Domain.

4) 2 Mirage 2000-Mk.5EDAs belonging to the 7 Sqn of the Qatar Emiri Air Force performed their first Odyssey Dawn mission out of Souda Bay, Crete, along with 2 FAF Mirages. The Italian press reported the arrival in Akrotiri airbase in Cyprus of some British spyplanes, quoting the Famagusta Gazette website that said that the RAF had confirmed the arrival of some E-3D Sentry, Sentinel R1 and Nimrod R1. Actually, these should be the same aircraft that have been operating from Akrotiri since days…. The UAE F-16s should be deployed to Trapani via Souda, even if there’s much uncertainity on the exact date and forward operating base. US have deployed AC-130s from Mildenhall to Sigonella and 6 A-10s were stationed to Aviano.

Sudan is now allowing coalition forces to use its airspace to enforce the NFZ. Considering the location of the Sudanese airspace can we assume the rumoured RSAF F-15S participation is more than a hypothesis? Maybe also that some corridors and refueling areas are required there for aircraft (tankers, AEW, etc.) departing from other countries, from Diego Garcia or from the USN Carrier Strike Groups operating within the Fifth Fleet AOR (almost impossible considering the distance from the Persian Gulf). The Canadians are providing extensive and quite interesting coverage of Operation Mobile, as the CAF contribution to Odyssey Dawn was named. Thanks to the daily updates we know that 2 CF-18s conducted one sortie accurately released precision-guided munitions on an electronic warfare site in the vicinity of Misratah; 2 CC-150 Polaris air-to-air refuelling tankers took part in coalition operations, providing fuel for Canadian and other coalition aircraft (good, a sign of the above mentioned lack of information about “tanker sharing”), while the 2 CP-140 Auroras with air and ground crews have arrived in Italy and will provide strategic maritime surveillance in support of UNSCR 1973 and the arms embargo enforcement mission. 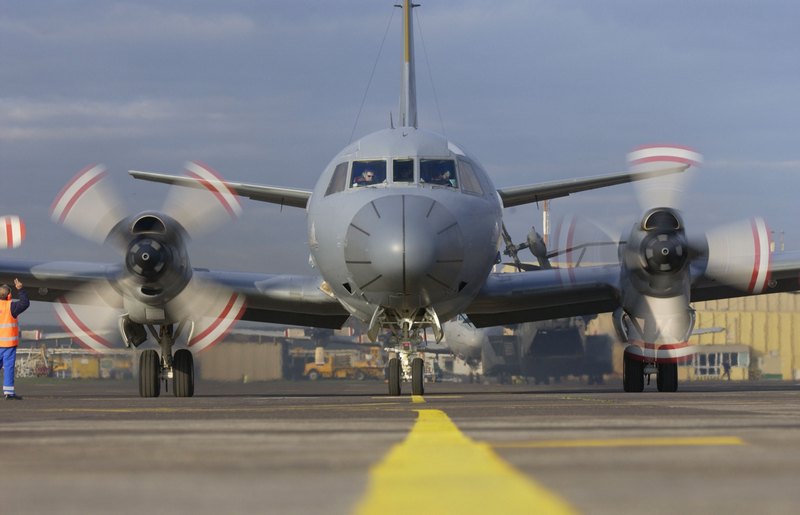 As I’ve explained in my last Debrief about the war in Libya Operation Unified Protector (was Odyssey Dawn) explained (Day 138 – 161) after fighting hard for Tripoli IAP (International Airport), on Aug 25 rebel forces […]

The missiles will fill a capability gap caused by the IRIS-T not being integrated with the F-35. The Naval Air Systems Command’s (NAVAIR) Air-to-Air Missiles Program Office (PMA-259) just announced that Italy became the 28th […]