It’s a pity that that the news of the “Libyan aircraft shot down by a French fighter after violating the No-Fly Zone” had to be seen under another perspective, otherwise I would have had the chance to comment in today’s analysis the first kill of a Rafale in combat (after many claimed DissimilarAir Combat Training) as well as how quickly Air Vice Marshal Greg Bagwell (who, yesterday, had affirmed that the Libyan Air Force no longer exists) was contradicted. Indeed, a Soko G-2 Galeb of the Libyan Arab Air Force (LARAF) was destroyed by a French Rafale patrolling the NFZ enforced by the coalition, but as it became clear later during the day, the Libyan plane was not intercepted mid-air but smashed by an AASM (Armement Air-Sol Modulaire, Air-to-Ground Modular Weapon) right after landing in Misratah. According to the French MoD, the Galeb was detected by an E-3F providing Airborne Early Warning in that area: the French AWACS vectored a Rafale flight to “investigate” the unknown traffic, that was visually identified as hostile and hit after landing. Many wondered if this type of engagement could count as an air-to-air victory. The answer is obviously NOT. I believe there’s no need to explain why. Just think how many kills could be claimed by the B-2 Spirits (and, paradoxically, also by Tomahawk cruise missiles) that attacked Ghardabiya airbase at the beginning of Odyssey Dawn, considering the number of aircraft most probably disintegrated together with their shelters, if we’d accept the idea that makes no difference whether the aircraft is flying or not.
Anyway, the Libyan Galeb was a (slow) moving target on the ground, lacking any self-protecting countermeasure and probably without the proper situational awareness: not a difficult shot for a Rafale equipped with Damocles, a 3rd generation targeting pod, and PGMs.

For the reasons I explained from the first of this series of debriefings, air forces and aircraft manufacturers are eager to claim a kill in combat, to the point that a French friend tweeted me the following hilarious comment on Twitter: “The Rafale is now air-to-almost-air combat-proven… Send in the Dassault sales crew!”, but it is extremely unlikely that any allied aircraft will ever have a chance to splash a flying LARAF fighter, since none is flying. The only possibility to get a close encounter with the enemy (and succeed in the “desperate attempt to get in the history books…” as Alan Warnes, former Editor, now Chief Mil Correspondent, of AirForces Monthly, ironically commented) will come from defecting aircraft or from planes trying to relocate to some of the remote airfields that are currently beyond the borders of the NFZ (that doesn’t cover the whole country). What the Soko G-2 was trying to do, is difficult to say. For sure, flying in the midst of a NFZ surveilled H24 by AWACS and armed fighters is never a good idea as any attempt would be immediately detected. Whatever the reason for this suicidal flight was, the G-2 represents the first sign of LARAF activity since the beginning of Odyssey Dawn.

The most interesting details on the air campaign came from the Pentagon news conference that I could watch on the dedicated channel on the Pentagon’s website (slides too were available, well done!). Navy Vice Adm. William E. Gortney, director of the Joint Staff said that the coalition enforcing the NFZ in accordance with the UN resolution is growing in size and capabilities. More than 350 aircraft (over a half belong to the US) from 9 nations are currently involved in the air campaign that continues to target the already degraded Libyan air defence capabilities, logistics nodes and ammunition supplies. In the last day, the coalition flew a total of 130 sorties, 49 of which were designed to hit a pre-planned target; 75% of the missions were flown by partner nations.
On Day 6, the coalition flew a total of 130 sorties of all types: from air-to-air refueling, to ISR (Intelligence, Surveillance and Reconnaissance), to Combat Air Patrol and strikes. The number of flying aircraft is such that only a fine coordination based on daily ATOs (Air Tasking Orders) ensures the deconfliction of the various missions in the congested airspace over the Gulf of Sidra, Gortney explained.

Ships and submarines belonging to a naval force made of 38 vessels (12 US ones), launched another 14 TLAMs (Tomahawk Land Attack Missiles) at targets ashore. Designated targets for these cruise missiles could be aimed at suppressing air defences at airbases outside the NFZ where some kind of resupply movement or SAM activity was detected, or Scud launchers (will dedicate more space in the next debriefing).
Some more interesting details from the news conference:

1) Since yesterday I’ve recorded a certain number of tweets providing attack coordinates of loyalist forces in the Misratah area for the coalition planes. A couple of examples (Tom Cooper of ACIG deserves a special thanks for the “head up”):

Withouth considering the problem of the authentication of the improvised JTAC (Joint terminal attack controller)  – what if the account broadcasting the coordinates of the Gaddafi forces is not owned by a rebel, but used by a loyalist to deceive the coalition planes and to induce them to drop their bombs on the revolutionaries? –  those tweets draw a new scenario (the one of smartphones with integrated GPS and Internet connectivity to forward targeting details) and move the fights between rebels and loyalist forces into the cyber battlespace where to different requirements are in deep contrast: on the rebel side, the need to use Internet to communicate and launch messages, on the opposite one, the need to prevent them from using the Web with service disruptions, DoS (Denial of Service) attacks againsts Free Libya websites etc., something similar to what happened during the Egypt uprising, as recalled by the ICT Security expert Paolo Passeri that in his recent article “Mobile Warfare” explains:

“it was…with the #Jan25 and #Egypt tweets that the World discovered for the first time the power of the mobile warfare. In those dramatic days every single person of the planet only needed to access her Twitter account in order to become a virtual witness of the events; dramatic facts reported in great detail by hundreds of extemporaneous reporters “armed” only with a Smartphone, and made available in real time to the rest of the world thanks to the “six degrees of separation allowed by Social Networks. The strength and the impact of this mobile warfare were so huge to force the declining Egyptian Government to shut the internet off for several days starting from January, the 27th”

But how does this warfare influence air operations over Libya? Simple: Information Operations are not only aimed at sending to the Gaddafi’s forces or to the rebels clear messages (either on the radio or by dropping leaflets) but can also involve the use of “unconventional weapons” targeted at maintaining Internet connectivity during military operations like

“satellite- and nonsatellite-based assets that can provide access points to get people back online; and finally cell towers in the sky, hooking up cellular pods to the belly of a drone, granting 3G coverage for a radius of a few kilometers on the ground”.

So far, no confirmation has come on this topic from the US (the only known to be capable of such kind of ops). Let’s see if something surfaces in the near future.

2) Many are wondering why the Italian Air Force preferred the F-16s to the Typhoons to escort the Tornado ECRs. I think that the answer is that the first could be refuelled by one of the 3 or 4 KC-135s flying above the Mediterranean Sea any time during Odyssey Dawn, while the Typhoon can’t. “No fuel, no endurance, no play”. Since USAF Stratotankers were available from the beginning (even if the F-16s performed the missions without the need to be refueled by foreign tankers) it was easier to task the F-16 in place of the F-2000s. However from Day 5, the Italian contingent was strengthened with a KC-130J and this could be the reason for flying longer CAPs with the Typhoons (that are not officially assigned to the coalition).

3) During Day 6, the coalition was joined by a Dutch detachment consisting of 6 F-16AM and one KDC-10 that arrived in Decimomannu in the afternoon (as the picture taken by Bizio Demontis farther below shows).  They are expected to begin operating in 1 or 2 days. As the air campaign moves deeper into the country an increasing number of E-8C Joint Stars is reported to be ensuring battle management and targeting for strike aircraft over Libya. The Norwegian Air Force F-16s operating out of Souda Bay, in Crete performed their first mission around noon of Day 6. A flight of 2 performed an unspecified combat mission in the Libyan airspace. The Italian MoD affirmed that ItAF could provide more assets if requested and explained in an interview that, initially, the coalition had requested 4 Tornado IDS to perform strike missions, that Italy did not agree to use in combat since the beginning of the operations. The UAE Air Force will deploy 6 F-16s and 6 Mirage 2000s to help the coalition to enforce the NFZ. Their deployment base could be Souda, Decimomannu or Trapani (this latter is becoming a bit overcrowded). Remaining on the airports news, Trapani could opened again for limited civil service from Monday. A good news for spotters eager to get some pictures over there?
French Air Force and Navy are continuing their combat patrol missions so as the Canadians whose CF-18s are using their Advanced Targeting Pod as the following footage shows:

The Canadian detachment (kudos for reading this blog and quicly solving the ADS-B problem of the tanker) is going to be joined by 2 CP-140 Auroras to enforce the  embargo on arm sells.

4) NATO has agreed to take over the responsibility of the Odyssey Dawn only for what concerns the enforcement of the NFZ.

5) Incidentally, Mar. 24  marked the 12 anniversary since the beginning of Op. Allied Force. 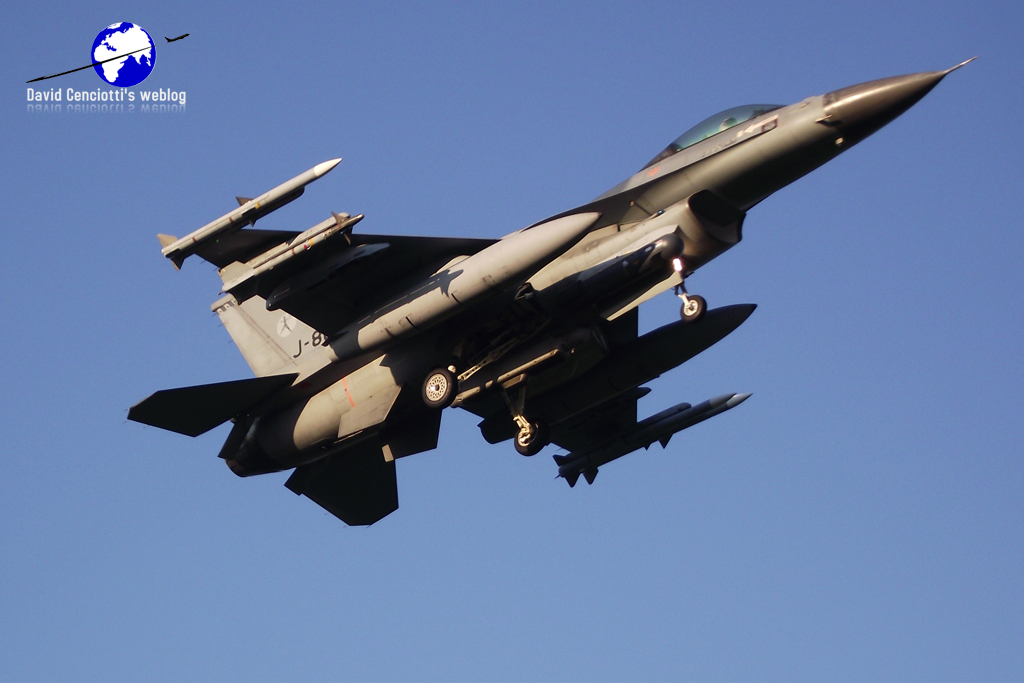 While NATO and some partner’s fighter jets continue with pretty boring patrol flights to enforce a Libyan No-Fly Zone that is slightly becoming useless (given the total lack of aerial threats), Germany has deployed its […]