The Leonardo (AgustaWestland) HH-101 Caesar has been demonstrated in Warsaw. Leonardo Helicopters company starts a marketing campaign in Poland

Leonardo is trying hard to pitch the AW101 Merlin helicopter as a perfect offer for the Polish Navy following the cancellation of the former multi-role helicopter tendering procedure (during which Airbus Helicopters Caracal was indicated as the winning bid).

This is what the demo that took place at the Bemowo/Babice airfield in Warsaw last week seems to suggest.

Considered that the tender was canceled and that the Polish MoD would be inclined to acquire several types instead of a single platform, the presentation of the HH-101A Caesar (a variant of the baseline AW101 advanced medium lift helicopter used by the Italian Air Force for Personnel Recovery, Special Forces Operations support, SAR, MEDEVAC and Slow Mover Intercept) is a clear symptom that the PR campaign concerning the procurement SAR plaftorm for the Polish Navy has just started. 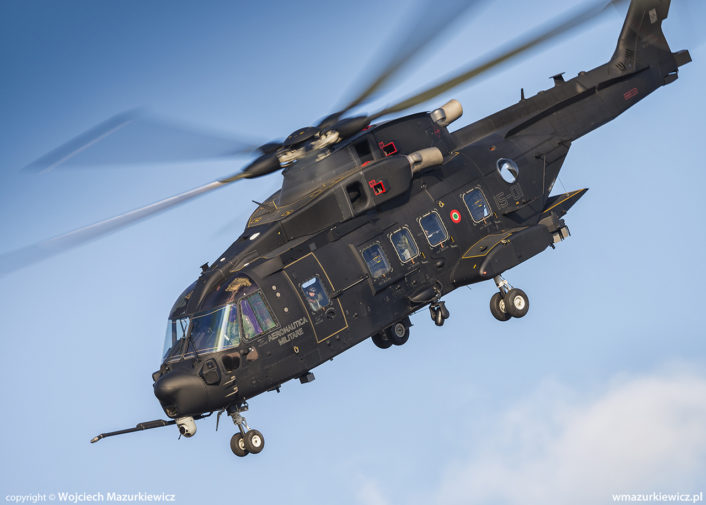 Enjoying strong support by the current government, which is rejecting anything that was done by the predecessors including the selection of Caracal during the previous tender, PZL Świdnik (the biggest helicopter manufacturer in Poland and part of Leonardo-Finmeccanica’s Helicopter Division since 2015) is quite confident that the AW101 has no competition on the market when it comes to the maritime operational regime.

However, some of the statements made by President Krzysztof Krystowski about the Leonardo helicopter are at least inaccurate, as duly noted by Interia.pl’s Sławomir Zagórski.  For instance, Krystowski said that the Italian helicopter is 20 to 30 years younger than its competitors, even though the AW101, on which the more modern Caesar is based, made its maiden flight on Oct. 9, 1987, about 10 years before the Sikorsky’s S-92, which is considered a competitor of the Merlin in the global market (although S-92 is not offered in the Polish tender as of now, only the SH-60, designed at the end of the 1970s, is being offered according to the reports).

Nonetheless, it cannot be negated that the AW101 is a great, capable and specialized maritime helicopter. 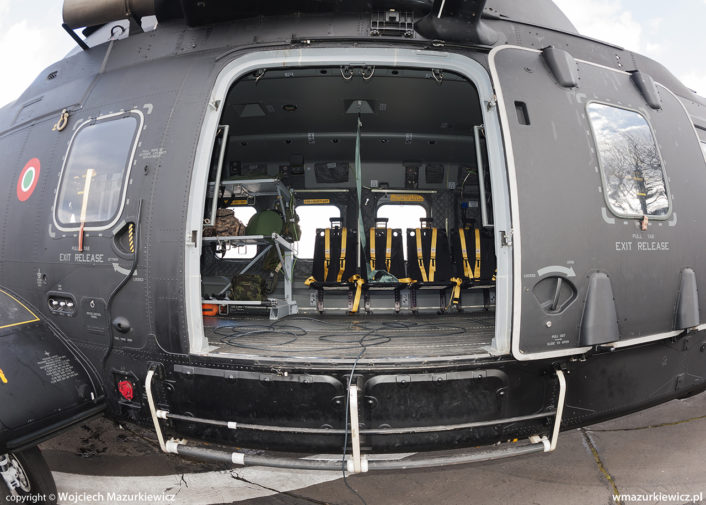 The aircraft is very safe, since it utilizes 3 engines, contrary to its counterparts proposed by other manufacturers, which are equipped with 2 engines. Two engines are running during a normal flight, while the third acts as a reserve.

Moreover, its size allows the AW101 to carry up to 30 persons onboard, making it a perfect platform for SAR operations (and not only…). For this reason, the Merlin is operated by several air arms around the world, including the Italian Navy, the Royal Navy, Royal Danish Air Force, the Royal Canadian Air Force, the Portuguese Air Force and the Japan Maritime Self-Defense Force. Noteworthy, a Merlin variant, designated VH-71 Kestrel, was developed and manufactured in the US by a consortium headed by Lockheed Martin to serve in the US presidential transport fleet but the program was cancelled.

Therefore, it’s safe to say that the AW101 and its variants, with proven experience over the North Sea, in the Arctic or over the Atlantic certainly has features that make it a perfect solution, in the specific field of applications – maritime SAR ops in adverse weather conditions. 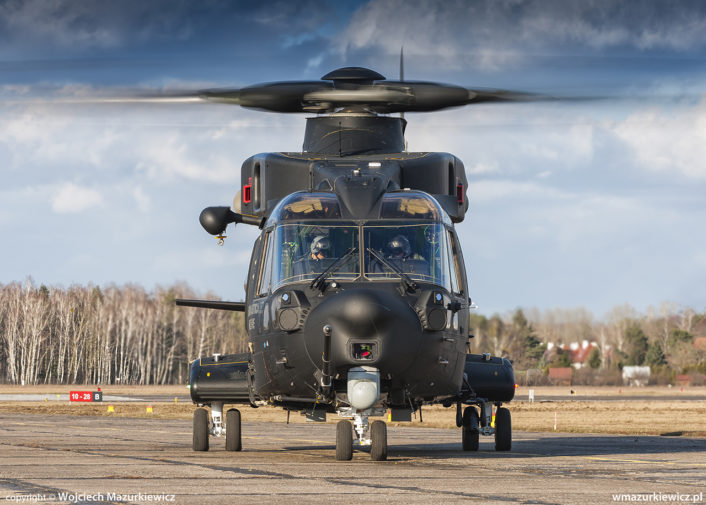 On the other hand, the W-3 Anakonda helicopters operated by the Polish Naval Aviation Brigade  are capable of picking up only 2 casualties at sea and are very sensitive to adverse weather, whereas the Mi-14 Hazes, also used by the Polish Navy, are expected to be withdrawn from service soon, for safety/maintenance reasons.

But pilot shortage could be an ever greater issue for the Polish Navy than the helicopters’ obsolescence.

Back in January, three Mi-14 pilots, including two commanders who had credentials required to fly the helicopter in adverse weather, retired. Along with them, two rescuers, engineer and some other members of specialized personnel – 23 soldiers in total – have left the unit, facing a prospect of cuts in the area of retirement benefits, expected to be introduced by the government. Only one and a half of the Mi-14 crew still serves in the Polish Naval Aviation Brigade, as Zagórski was told by the Navy officials. One should also remember that Mi-14PŁ/R helicopters are also coming near the end of their operational lifetimes, with one expected to be withdrawn by the end of this year, and the other having its service life expectancy one year longer. As we were writing last year, the Mi-14 cannot be replaced with the W-3 Anakonda helicopter, due to weather limitations imposed on the latter. 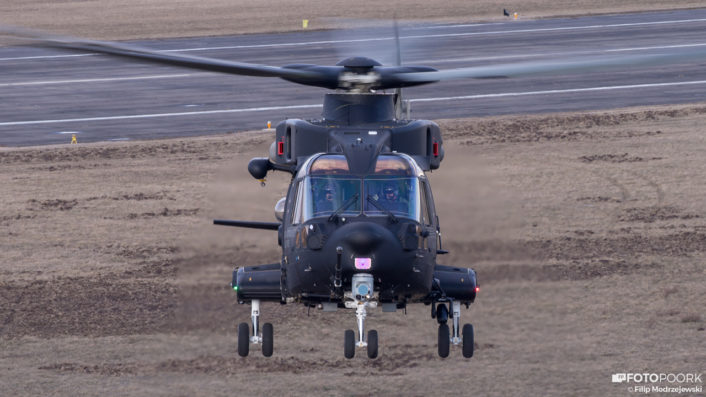 Anyway, the possible procurement of the Leonardo helicopter praised by the service and supported by the government has also been criticised by some analysts.

There is someone who questioned whether Poland would require such a helicopter, considered the current platforms being flown and the fact that the new chopper may turn out to be barely affordable for Warsaw.

The size also has raised some concern, since 14,600 kilograms of maximum take-off weight make would make the AW101 unable to operate from landing pads of the ships of the Polish Navy. This would also limit the ASW (Anti Submarine Warfare) capabilities of the new asset: for this reason the MTOW (Maximum Take Off Weight) requirement within the former tender was limited down to 10.5 tonnes. What is more, the high MTOW of the AW101 does not translate into higher payload carrying capacity, which is comparable with the helicopters of the 10 tonnes-class. This is caused by additional load imposed by the third engine and a larger main gearbox.

Furthermore, there is the issue of cooperation between the Polish MoD and the Leonardo-owned PZL Świdnik facility. The sailors of the Naval Aviation Brigade doubt whether the facility could cope with delivering the AW101, seeing it struggle with maintaining the W-3WA Anakonda rescue helicopters. The first of the aircraft which underwent maintenance and overhaul works at Świdnik has been returned with one year of delay. This contributes to a prospect of a crisis in the Polish SAR units – as Mi-14s are being withdrawn, and W-3s are still in Świdnik, the equipment available would be simply insufficient to maintain proper capabilities along the coast, as we reported last year. 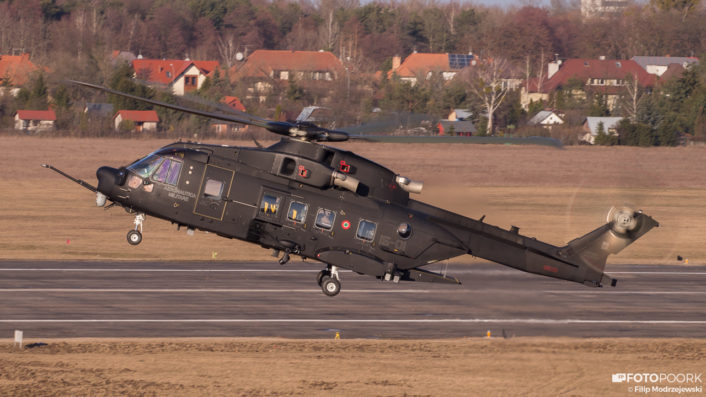 Anyway, since the procurement is defined by the Polish MoD as being of principal importance for the national security, it has been made confidential. Hence the bidding information remains unavailable publicly. This issue has been criticized by General Waldemar Skrzypczak one of the generals who were dismissed from the Army back in December – Polish General Command has suffered from a “purge”, with most of the top officers resigning from service, following the dismissal of General Miroslaw Rózański, General Commander of the Armed Forces.

The claims suggest that confidentiality would make it easier for the government to hide the per unit cost of both the AW101 and any other contender making it impossible to compare the chosen SAR helicopter with those selected in former tender, where 50 Caracals were to be acquired for a gross amount of PLN 13.3 billion, along with proper offset arrangements (training, maintenance and logistical capabilities established in Poland).

Leonardo said that the helicopters could be delivered in two years from the signing the potential procurement agreement.

Update: reportedly the Italian HH-101A Caesar helicopter presented in Warsaw was forced to perform an emergency landing at Dubnica airport in Slovakia on its way back to Italy, after two out engines lost power/suffered an unspecified failure. The aircraft landed safely on the third engine and the crew is waiting in Slovakia for the spares to be delivered. A photo of the aircraft on the ground was published on the Airplane-Pictures network. 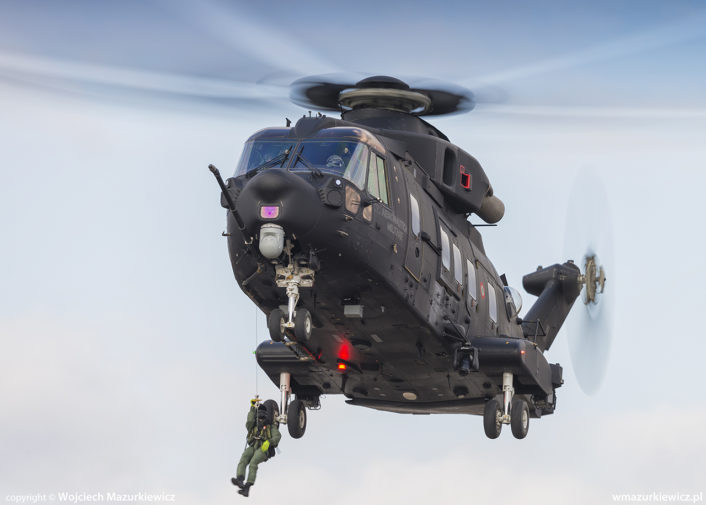 The Antonov An-225 Mriya Lands in Warsaw, Poland, Carrying COVID-19 Relief from China

Four French Air Force Rafales have deployed to Poland. The aircraft don’t sport the traditional tail markings and the reason may be their unit fough alongside the Soviets in WWII. At 09.40 GMT, four French […]

Awesome Photos Show the Polish MiG-29s during Night Ops. Here are some shots taken at the 23rd Tactical Air Base of the Polish Air Force where MiG-29 aircraft are stationed. The set of photographs shows […]