The AgustaWestland AW101, a new generation all-weather medium-lift three-engine helicopter is among the “main characters” of Skyfall, the 23rd James Bond movie, which premiered in London on Oct. 23, 2012.

Known as “Merlin”, the large chopper used by 007’s villain is an evolution of the EH-101 multi-role helicopter operated by the military of several nations around the world (including the UK, Italy and Canada).

The AW101 is the chopper on which the US101 project for the replacement of the U.S. Marine One helicopter is based.

Flown by AgustaWestland test pilots, the modified AW101 spent 15 flight hours rehearsing and shooting the action scenes (that appeared on Youtube well before the movie was released) with the aircraft as the following behind-the-scenes video illustrates.

As happened with the Stealth Black Hawk disclosed by the Osama Bin Laden raid, even 007’s helicopter has quickly turned into a scale model. 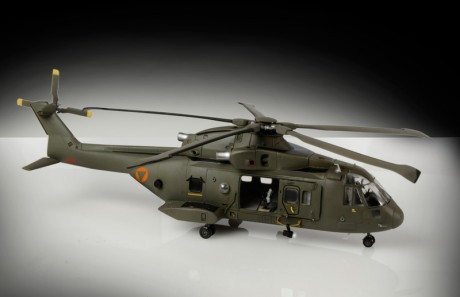 Provided that it can be easily, partially disassembled, a large, heavy, multi-role helicopter can be carried inside an airlifter (a large one). Heli-Expo 2014 at Anaheim Convention Center, California, is one of those events companies which […]

The helicopter, based on the commercial AW119, will replace the TH-57 Sea Ranger. The U.S. Navy announced on January 13, 2020 the award of the contract for the new TH-73A helicopter to AgustaWestland Philadelphia Corporation, […]

The Canadian Forces Search and Rescue team was selected as the winner of the AgustaWestland‘s 2012 Cormorant Trophy for Helicopter Rescue. The trophy was awarded for  a dramatic long range complex rescue mission which took […]