The PLAAF (People’s Liberation Army Air Force) has eventually unveiled its long-awaited J-20 stealth fighter to the public during the Zhuhai Air Show’s opening ceremony. Is it possible to compare it with the F-22?

Two LRIP (Low-rate Initial Production) J-20A stealth jets did a brief 60-second fly-past at the Zhuhai Air Show 2016 in Guangdong province on the Show’s first day on Nov. 1, 2016, marking the first public appearance of the “Mighty Dragon” fighter that performed its maiden flight back in 2011.

Even though the J-20s did not fly a dramatic flight demo, the two fighters thundered above hundreds of spectators as well as political and industrial dignitaries and executives, made a few climbs, turns and formation fly-bys and then disappeared again.

The public appearance was far from being unannounced, due to the preparation at CAC earlier this month.

Four days ago even the PLAAF itself announced in an official statement, that it would demonstrate its latest J-20 stealth fighter jet at the Zhuai Air Show: Senior Colonel Shen Jinke, PLAAF- spokesman noted, that “the J-20 was designed by our aircraft researchers for future aerial combat. Test pilots from the Air Force will use it to perform at the 11th China International Aviation and Aerospace Exhibition.”

We still know little of about this aircraft even though it bears a loose resemblance to at least three (if not more) other types of aircraft: the F-22 Raptor; the Mig 1.42 prototype; and the the Mig-31 “Firefox”, a fictional aircraft appearing in “Firefox”, a 1982 action film produced and directed by, and starring, Clint Eastwood based on a 1977 novel written by Craig Thomas. 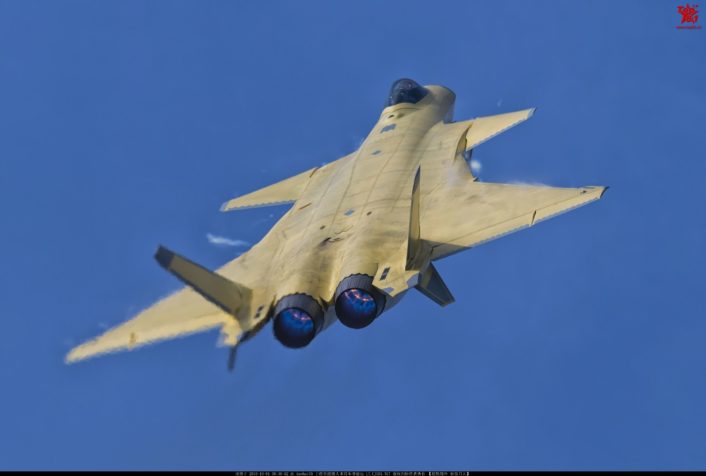 The aircraft is believed to be equipped with IRST (Infra-Red Search and Tracking), AESA radar and several other interesting stuff, but its ability to match the most advanced western “hardware” is still much debated.

What follows is an analysis of the latest J-20’s achievements.

With the arrival of the first LRIP aircraft in December 2015 and further new aircraft since then, all “older” prototypes (2011, 2012, 2013, 2015, 2016 and 2017) were transferred in the meantime to the CFTE at Xi’an-Yanliang for further ongoing tests with regular detachments for alleged weapons testing at the PLAAF’S Flight Test and Training Base (FTTC) at Dingxin. These tests so far included captive tests with four large drop-tanks and reportedly included firings of both the new PL-15 long-range AAM as well as the new PL-10 short-range AAM. Besides that, it was reported that the WS-15 has just finished ground testing (with a thrust of about 160kN reached), and it is ready to begin the test on an IL-76LL platform.

In retrospect the year 2016 so far was an extremely successful year for CAC: reports assume that at least seven LRIP J-20As were flown; and most interesting, not only in yellow primer or standard PLAAF-grey with toned-down national markings, but apparently at least one spotting an all-new splinter scheme [similar to that used by West’s Aggressors]. Other reports assume that a few J-20A have already left Chengdu to a first OPEVAL unit, which is most likely established at the flight test center (FTTC) at Dingxin air base, where 12 new hangars were erected since 2015.

Otherwise most spectators, enthusiast and analysts still have to be patient and it is surely too early to judge to what extent the J-20 can match the stealth properties of the F-22 Raptor and F-35 Lightning II or how far its avionics are comparable. So far not even its external dimensions, specifications on its KLJ-5 AESA-radar –that is also under test on a special Tu-204C testbed – nor its type of engine were officially revealed, however following the latest reports it is not unlikely a special custom-tailored version based on the Salut AL-31FM2. 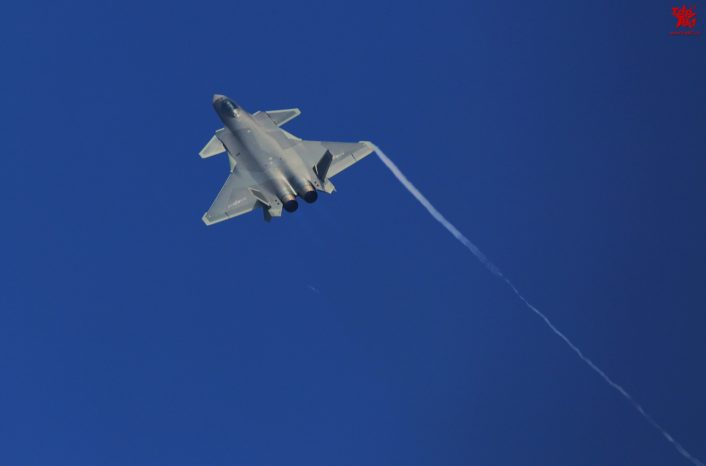 Since its maiden flight in January 2011 ten prototypes were manufactured (Note: the two demonstrators 2001, 2002 = now 2004, + the prototypes 2011, 2012, 2013, 2015, 2016, 2017 and two static test specimen) and that this type is to be the third stealth fighter jet to enter operational service following the United States’ F-22 Raptor and the F-35 Lightning II. In retrospect the J-20A has indeed reached the LRIP-phase with the J-20’s design being frozen. If the PLAAF follows now the usual procedures, a first unit equipped with these LRIP J-20As of the current interim standard will enter service within the PLAAF at around the year’s end or early 2017; much earlier than expected. As such it seems to be confirmed that even if limited in its capabilities due to the missing WS-15, the PLAAF will bring that type to service as soon as possible to exploit and explore operational tactics and procedures for this new fighter.

Concluding, the J-20 is a giant leap for the PLAAF both capability-wise and technology-wise alike. Did anyone of us expect a Chinese stealth fighter to be operational before 2020 when asked in, let’s say, 2010?

As such even if probably no match in terms of stealth to the latest F-fighters (due to no stealthy-nozzle, open chaff-and-flare boxes and other details…) it is surely much more stealthy than any other type operational in that area. Even if its engines are not the top ones desired – aka the future WS-15 – they are surely comparable (if my theory is correct and I’m quite confident!) – they give that type already a performance surely not worse than the latest J-11B … as such it is a huge step even if it might be well below the F-22’s capabilities.

Andreas Rupprecht is an aviation journalist. He has written several books on China’s military aviation, including “Flashpoint China” and “Modern Chinese Warplanes”.

After a badly blurred photo of the J-20 weapons bay surfaced, eventually the undoctored version of the image has appeared on the Chinese Internet. The following image, sent by a reader, shows the J-20 with […]

It looks like the controversial F-35 is holding its own at Red Flag exercise underway at Nellis AFB. As of Feb. 3 the F-35A had achieved a quite impressive score during Red Flag 17-1, the […]