Stunning photographs of vapour cones generated by the RNlAF F-35s during “Luchtmachtdagen 2016” airshow.

On Jun. 10, the F-35 Joint Strike Fighter made its international airshow debut with an Air Power Demo performed during an airshow at Leeuwarden Air Base, in the Netherlands.

The first two Dutch F-35A aircraft, AN-1 (F-001) and AN-2 (F-002), simulated a series of attacks on the airfield and conducted some high-speed passes that were made particularly interesting because of the condensation clouds that appeared around the JSF: known as shock collar or vapour cone, these cloud are generated by a sudden drop in pressure associated with high speed that allows water vapour to condense as vapour.

Although many believe that these clouds appear when aircraft “break” the sound barrier, they can appear when the planes fly at subsonic speed, in humid air.

The photographs in this post were taken at Leeuwarden by The Aviationist’s Jacek Siminski. 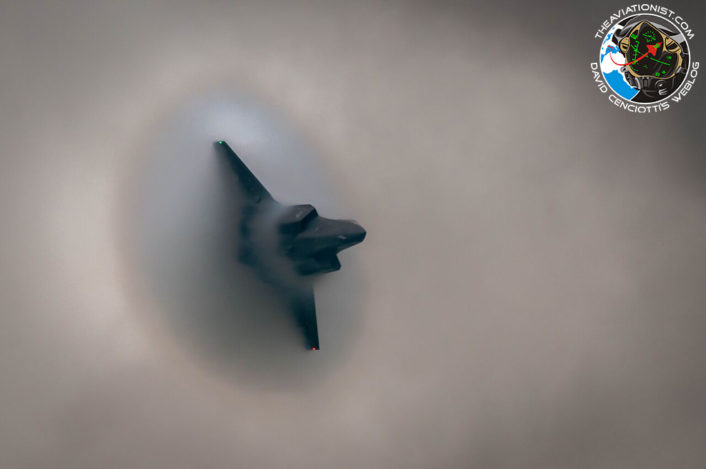 The aircraft has disappeared at around 19.27LT. The status of the aircraft and its pilot is unknown. According to several Japanese media outlets, an F-35A Lightning II belonging to the Japan Air Self Defense Force […]

The Italian F-35s deployed to Keflavik, Iceland, were among the NATO interceptors scrambled to monitor the Russian activity in northern Europe. On Jul. 3, 2020, three Northern Fleet Tu-142 aircraft flew a 12-hour mission across […]