Here’s what it’s like to prepare and fly to the Edge of Space in a MiG-29 Fulcrum.

The following footage was shot by famous aviation video producer Artur Sarkysian for MigFlug, the company that offers fighter jet flying experiences to their customers. Among them, the Edge of Space mission takes people who want to experience a kind of flying reserved to fighter pilots (or, in same cases, astronauts), with their MiG-29 Fulcrum.

According to MigFlug, the Edge of Space Flight – or Stratosphere Flight – has several unique features unavailable elsewhere:

– It’s the only possibility for everyone to break the sound barrier
– Supersonic flying with a top speed up to MACH 1.9
– Altitude up to 20km/65,000ft altitude
– Aerobatics with G-Forces up to over 9g (!)

Noteworthy, the MiG-29UB climbs to such altitudes with a climb at the maximum speed in a huge parabola that helps “overshooting” the service ceiling of the famous famous Soviet-era jet (still serving in Russia, Ukraine, North Korea, Poland, Syria and Iran, among the others). 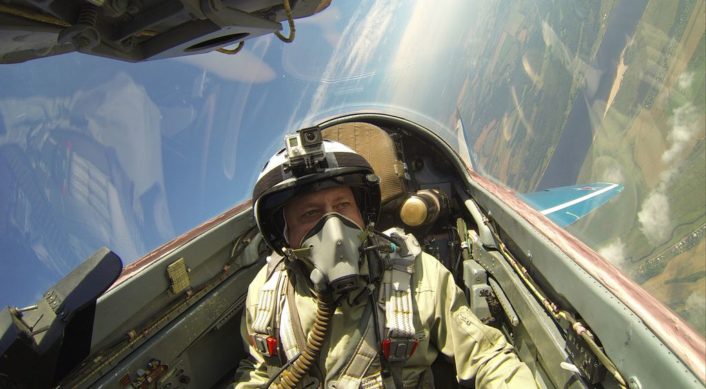 Although the flight gives also “backseaters” the opportunity to control the aircraft, the experience does not only include the supersonic zoom to the limit of the stratosphere, as customers are introduced to the mission on the ground, provided the required briefing and flight gear, and then filmed during the sortie with various cameras.

For instance, the video below shows the flight as well as the preparation to it of Canadian Ferrari racecar driver, Ferrari club president and entrepreneur Josh Cartu.

If you don’t want to see the ground part, including the preparation for the flight, skip to min. 04.00.

The flying segment of the video was shot by Artur Sarkysian, a famous aviation video producer who attached a GoPro cameras to the two-seater Mig-29UB’s outer surfaces in such a way they could withstand speed up to 2450 km/h and a load factor of 9g!

Interestingly, in a clip we have published recently, the cameras even caught the shock wave on the Fulcrum’s wing as the aircraft thundered past Mach 1.0.

This is as close to flying a MiG-29 as you can get without actually flying it!

Here are two videos showing a transfer and operations of Polish MiG-29’s during the Baltic Air Policing mission which is a NATO initiative of conducting air monitoring of the Baltic region. I suppose this gives […]

It’s the second crash in less than two months. On Jul. 14, at 09.50 Moscow Time, a Tu-95 bomber crashed in an uninhabited area 80 km from Khabarovsk. According to the Russian Ministry of Defense, […]