Conceived to fill the technological gap between Russian and U.S. fighters, the MiG-29 has been one of the last cutting edge fighters produced by the then Soviet Union.

The Fulcrum was sold in large numbers to former Warsaw Pact air forces to replace their ageing MiG-23 Floggers and twenty four of them were also delivered to East Germany. The East German Jagdgeschwader (JG) 3 took delivery of its first MiG-29 in 1988, and on Oct. 4, 1990, the Wing operated 24 Fulcrums, equipping two squadrons.

A follow-on batch was on order, but the aircraft were never delivered.  After the end of the Cold War and following the re-unification of Germany, the Luftwaffe inherited some of these fighters making them as much “NATO-compatible” as possible.

Among the pilots that amassed experience at the controls of the Luftwaffe Fulcrums, there was the Oberstleutenant (the Luftwaffe rank equal to Lieutenant Colonel) Johann Koeck who, after flying the F-4 Phantom, became commander of the only Luftwaffe MiG-29 squadron.

Here is what Koeck recalls in Jon Lake’s book “How to fly and fight in the MiG-29 (Jane’s At the Controls)”:

“With the re-unification JG 3 became Evaluation Wing 29 on 1 April 1991. On 25 July 1991 the decision was taken to keep the aircraft and integrate them into the NATO air defense structure. JG73 was activated in June 1993, and the MiG-29s assumed a National (Day Only) QRA(l) commitment over the former East Germany. The MiG-29s moved to Laage in December 1993 and on 1 February 1994 the unit gained a NATO QRA(l) commitment.”

Being an experienced Fulcrum driver, Koeck can tell which were the weak and the strength points of the MiG-29.

The most obvious limitation of the MiG-29 was the aircraft’s limited internal fuel capacity of 3,500 kg (4,400 kg with a centerline tank). The MiG-29  had no air-to-air refueling capability, and its external tank was both speed and maneuver limited.

If a mission started with 4400 kg of fuel, start-up, taxy and take off took 400 kg, 1,000 kg were required for diversion to an alternate airfield 50 nm away, and 500 kg for the engagement, including one minute in afterburner, leaving only 2,500 kg of fuel.

The Fulcrum’s limited range conditioned also how the aircraft could perform a specific mission: in fact the MiG-29s didn’t possess the range to conduct HVAA (High Value Airborne Asset) attack missions, and they were effectively limited from crossing the FLOT (Front Line of Own Troops).

This limited station time and lack of air-to-air refueling capability ruled the MiG-29s out of meaningful air defense missions.

Another limitation of the aircraft was its radar that, as Koeck explained, was at least a generation behind the AN/APG-65, and was not line-repairable: if a MiG-29 experienced a radar problem, the aircraft went back into the hangar.

The radar had a poor display, giving poor situational awareness, and this was compounded by the cockpit ergonomics. The radar had reliability and lookdown/shootdown problems, hence  its poor discrimination between targets flying in formation, and moreover it couldn’t lock onto the target in trail, only onto the lead. 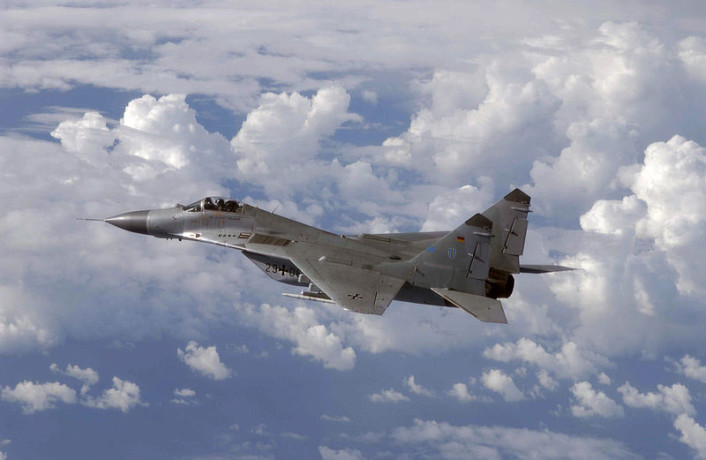 Due to these limitations the integration in the NATO environments of the Luftwaffe MiG-29s was really hard and restricted to only few roles: as adversary threat aircraft for air combat training, for point defense, and as wing (but not lead) in Mixed Fighter Force Operations.

Nevertheless the onboard systems were still too limited, especially the radar, the radar warning receiver, and the navigation system. These restrictions brought to several problems that the Fulcrum pilots faced in tactical scenarios, such as a  poor presentation of the radar information (which led to poor situational awareness and identification problems), a short BVR weapons range and a bad navigation system.

But despite all these limitations, once the furball started, the Fulcrum was the perfect fighter to fly. In fact thanks to its superb aerodynamics and helmet mounted sight, the MiG-29 was an exceptional fighter for close-in combat, even compared to aircraft like the F-15, F-16 and F/A-18.

As Koeck recalls “Inside ten nautical miles I’m hard to defeat, and with the IRST, helmet sight and ‘Archer’ (which is the NATO designation for the R-73 missile) I can’t be beaten. Even against the latest Block 50 F-16s the MiG-29 is virtually invulnerable in the close-in scenario. On one occasion I remember the F-16s did score some kills eventually, but only after taking 18 ‘Archers’ (Just as we might seldom have got close-in if they used their AMRAAMs BVR!) They couldn’t believe it at the debrief, they got up and left the room!”

Moreover with a 28 deg/sec instantaneous turn rate (compared to the Block 50 F-16’s 26 deg) the MiG-29 could out-turn them: in fact the Fulcrum retained an edge over its adversaries thanks to its unmatched agility which was reached combining an advanced aerodynamics with an old-fashioned mechanical control system.

After one of the German Fulcrums was sold for evaluations to the U.S. in 1991, the remaining 22 MiG-29s served until 2003, when they were sold to Polish Air Force for the symbolic sum of 1 Euro each.

Those Mig-29s were then upgraded and they currently provide Baltic Air Policing duties against the Russian threat in northern Europe.

On Mar. 15 the first Polish MiG-29 to have undergone avionics upgrade in the  Military Aviation Service Facility no. 2 (Wojskowe Zakłady Lotnicze nr 2) in Bydgoszcz took-off on its maiden flight. The upgrade plan aims at […]

A German Eurofighter Typhoon has already been painted with special World Cup 2014 markings. The images in this post were taken by photographer Gian Luca Onnis, at Decimomannu airbase, on Jul. 14, the day after […]

Polish Air Force Jets Up Close and Personal. In June, in collaboration with the Polish General Command of Armed Forces, Foto Poork’s Filip Modrzejewski has been involved in an air-to-air photoshoot with the Polish Air […]