The 64th Aggressor Squadron has unveiled the new “splinter” paint scheme for the F-16 Aggressors at Nellis Air Force Base during the 57th Adversary Tactics Group change of command.

According to a U.S. Air Force release:

“The paint scheme is a means of representing threats more accurately,” said Capt. Ken Spiro, 64th AGRS chief of intelligence. “There are real world threats that paint their jets in this way so we are changing over to make it more physically like their aircraft. Once a pilot who is training comes within visual range of the new Aggressor, they’ll be seeing a similar situation to what they would see with an actual threat aircraft.”

To represent these threats more accurately, the 64th AGRS looks for any and all ways to try to emulate the threats that are opposing combat air forces.

“The idea started at the 64th AGRS because we’re always looking for different ways to be more threat representative, and make the training more realistic,” said Spiro. “The 64th AGRS gets creative in extra ways, such as paint schemes to accurately and better represent threats. We act like, look like, or anything you can think of we try so we can be true to the threats. We’ve had some jets that are painted like a regular F-16, and then we’ve had some that have more of a tiger stripe pattern. Our F-16’s paint schemes have been similar to threats in the past and this new scheme is more representative of today’s threats.”

Noteworthy, a new F-16 with a new “shark” paint scheme is being prepared at Nellis. Inspired by the T-50?

However, this kind color scheme was “inadvertently invented” for U.S. Marine Corps F/A-18 Hornets to aid the young pilots in target ID: it was not introduced to make the jets similar to their Russian adversaries, just to make them more visible. 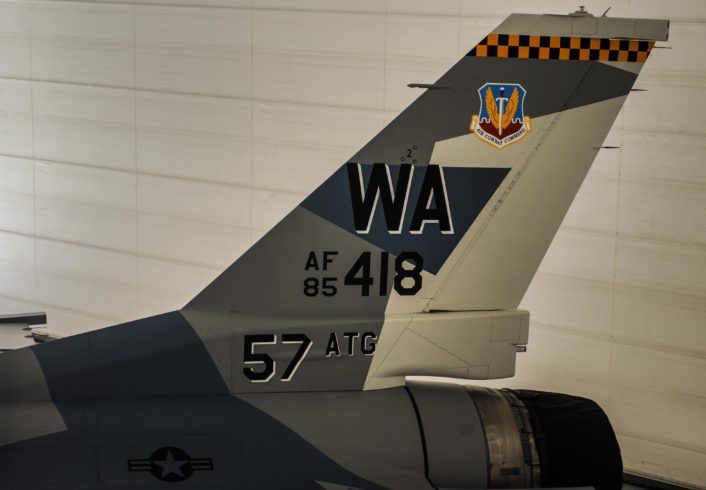