The risky business of being an adversary pilot.

Dissimilar Air Combat Training (DACT) is one of the most important parts in the training of modern fighter pilots. At the same time, an air combat maneuvering (ACM) session, where friendly and (simulated) enemy fighters fly against each other, can be one of the most dangerous training environment.

Although quite rarely, mid-air collisions do occur, sometimes with fatal results.

The two Hornets, along with another F/A-18, were playing the MiG-29 role during a Strike Fighter Advanced Readiness Program (SFARP) sortie. Flown by the Flight Lead LCDR Greg “Stubby” Stubbs and his two wingmen, LCDR Greg “G.I” Anderson and LCDR Cal Worthington, the three F/A-18s engaged two VF-41 F-14s that were escorting an EA-6B Prowler.

Almost immediately the two Tomcats scored two kills with simulated missile shots at eight miles out against LCDR Stubbs and against LCDR Anderson.

The three Hornets remained in formation together until the merge point (where friendly fighters meet enemy fighters) and following the rules of engagement the two “MiGs” killed by simulated shots, executed aileron rolls to give the students a visual indication of which Bandits were killed and which one they should attack.

It was in the middle of the second aileron roll that Stubbs and Anderson collided, as explained by LCDR Stubbs himself to Rick Llinares and Chuck Lloyd for their book Adversary: America’s Aggressor Fighter Squadrons.

The nose of the Hornet flown by Anderson ripped through Stubbs F/A-18’s left wing and clipped off half of the vertical tail, while Anderson Hornet’s nose cone along with his canopy and his drop tank were lost. One of his engines was damaged as well.

The “Knock it off” (the signal given by the pilots to stop a training air engagement) of the furball was called and someone said on the radio that a mid-air had occurred. LCDR Worthington called Stubbs asking him if he could control his F/A-18. Stubbs applied right stick, right rudder and started pulling the power back a little bit and the nose came up. He answered to Worthington “yeah, I have it.” In the meantime also Anderson called to say he was fine, even if the sound of the wind filled his radio communications. 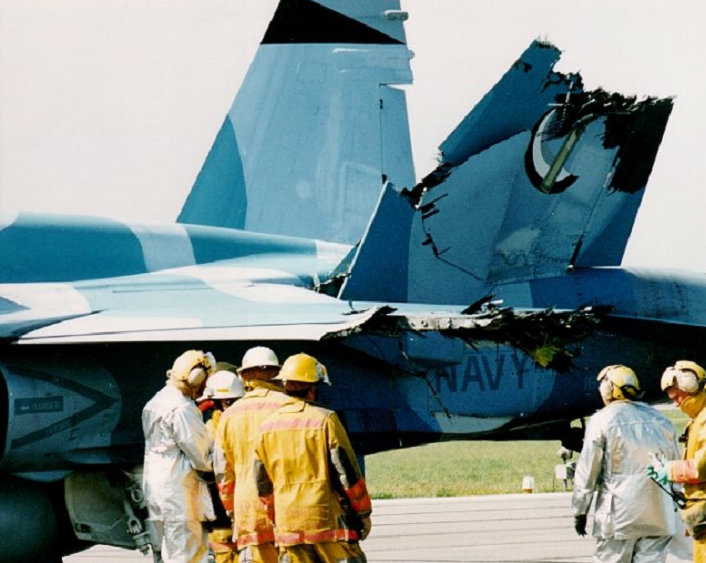 Both the damaged Hornets headed towards the coastline, with Stubbs assisted by Worthington, while the F-14s were trying to communicate with Anderson. Since the Tomcats weren’t able to contact LCDR Anderson because of a radio problem, Stubbs said to Worthington that he had to join up with Anderson since he was facing more serious problems: in fact Anderson had lost his probes during the collision and his airspeed and altitude indicators didn’t work.

Even though the Coast Guard station in Elizabeth City was the nearest airfield, it lacked an arresting cable system and so Stubbs and Anderson decided to go to Oceana. Not only did the aircraft configuration make a standard approach almost impossible, but Stubbs also discovered that his Hornet entered in dangerous left rolls if the speed descended below 200 knots. So the long runway and the arresting cable system available at NAS Oceana were the best option for them. 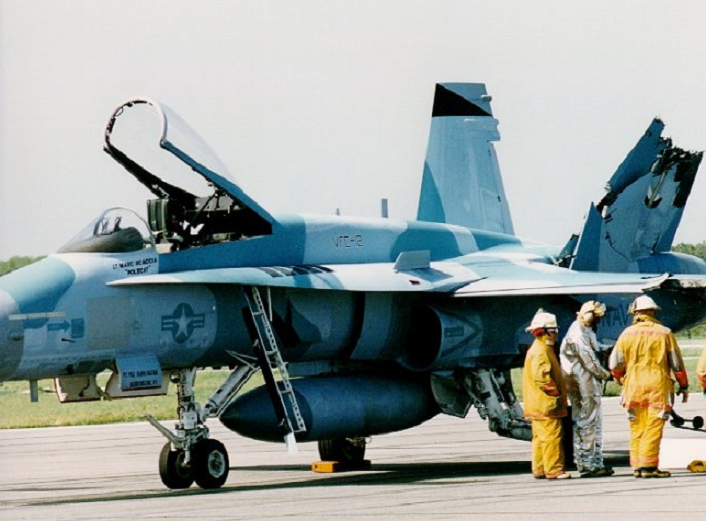 After consulting with a McDonnel Douglas representative Stubbs decided to land without lowering his remaining flap. Two more Hornets, flown by LCDR Bertran and Bowman, joined up with him while he was preparing to lower his landing gear.

The damaged Hornet touched the runway at 200 knots, a speed that exceeded both the arresting gear engagement speed limit (175 knots) and the speed limit beyond which the hook might be ripped off (182 knots).

Few moments later also Anderson came to landing: his F/A-18 had lost the whole canopy aft of the windscreen (hence the sound of the wind that filled his radio communications) and wires were flapping out of the nose, beating against the side of the jet, but he was able to safely land. 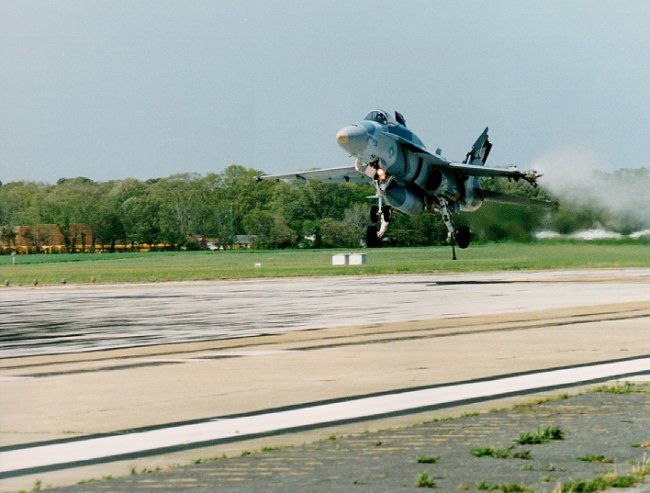 After two months, both pilots returned to flight status. Among the lessons learned in the mishap there was the need to put more emphasis on how pilots have to come out from the merge during the pre-flight briefing.

Conversely this accident was a significant testament to the sturdiness of the F/A-18: in fact although both the fighters were written off, the two Hornets were able to bring back home their pilots safely even after sustaining huge damages shown in the photos above.

Stunning cockpit footage aside, there are lots of interesting things in the latest Diamondbacks cruise video. VFA-102 have just released a video that shows what a Strike Fighter Squadron does on a daily basis when […]

Four of the most experienced USMC F-35B pilots speak about their aircraft. And they say it’s exceptional.

The voice of the pilots is clear – the platform is working exceptionally. The F-35 is a platform with the ultimate level of sophistication, made simple. And therein lay the beauty of the F-35, and […]