Chosen by Italy, Israel, Poland and Singapore to prepare their pilots to the 4th and 5th Gen. fighter jets, the Alenia Aermacchi M-346 “Master” is considered one the world’s most advanced jet trainers.

The never-ending evolution of the front-line warplanes that operate in a hi-tech battlefield with new generation avionics, PGMs (Precision Guided Munitions), EW (Electronic Warfare) suites and several hi-tech sensors, has called for the redesign of the training syllabus: rather than learning to fly fast jets, at a certain point of their training process, student pilots are required to become proficient at employing modern weapons systems in complex missions, in high-threat/high performance environments. 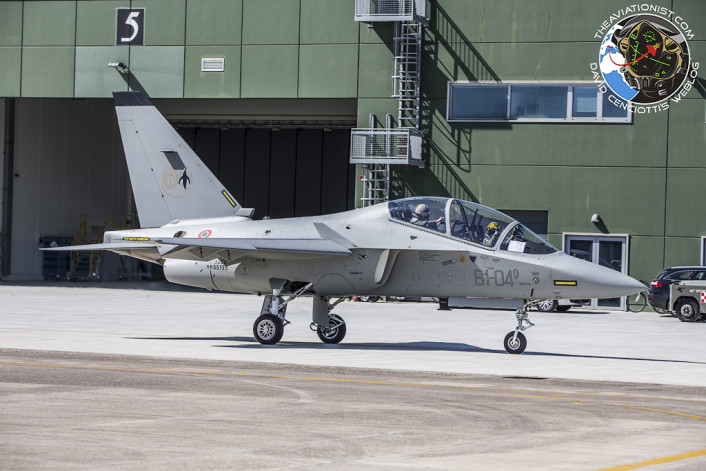 The Alenia Aermacchi M-346 “Master” is a dual-engine LIFT (Lead-In to Fighter Trainer) jet selected by Italy, Poland, Israel and Singapore for advanced pre-operative training, the latest stage of a fighter pilot training, which aims to develop the information management and aircraft handling skills of future pilots before they are assigned to the OCUs (Operational Conversion Units).

The “Master” couples cutting edge equipment with impressive performance for a plane of its type: the jet features a high thrust-to-weight ratio, supersonic speed at high altitude, and a maneuverability similar to those of the leading combat aircraft. It is equipped with a HUD (Head Up Display), HOTAS (Hands On Throttle And Stick), VCI (Vocal Control Inputs), and a Helmet Mounted Display system built around a lightweight HGU-55P helmet, with a night module that can to be fitted to the standard NVG eyepiece kit that works by overlaying the HMD symbology to that of the NVG imagery. In other words, it is equipped with all the “accessories” pilots can find in the Eurofighter Typhoon, the F/A-18 Hornet, the Dassault Rafale or the F-35 Lightning II Joint Strike Fighter. 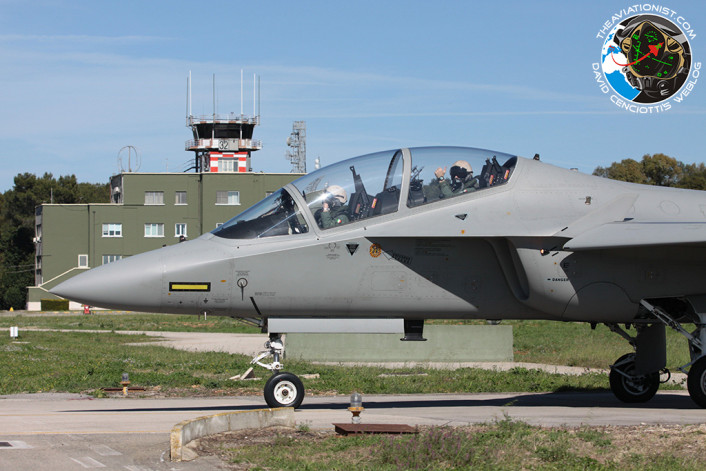 Furthermore, the M-346 can replicate the capabilities of the frontline aircraft in challenging tactical scenarios: the pilots can learn to use the radar, drop LGBs (Laser Guided Bombs) on moving ground targets designated through an Advanced Targeting Pod, and shoot radar-guided enemy planes in dissimilar air combat, even if the plane is not equipped with any of these systems: while interacting with the other aircraft or ground stations via datalink, the on-board computer generates the required HUD and radar symbology, offers a different weapons load out, in accordance with the training needs of the mission. The real-time mission monitor can even inject new allied and enemy planes into the system via Link 16, so that the threats will show up in the radar and on the HUD. This means, a flight of two M-346 in the air can perform a simulated intercept on a “virtual” enemy plane or attack a convoy on the ground generated by an IP (Instructor Pilot) on the ground. 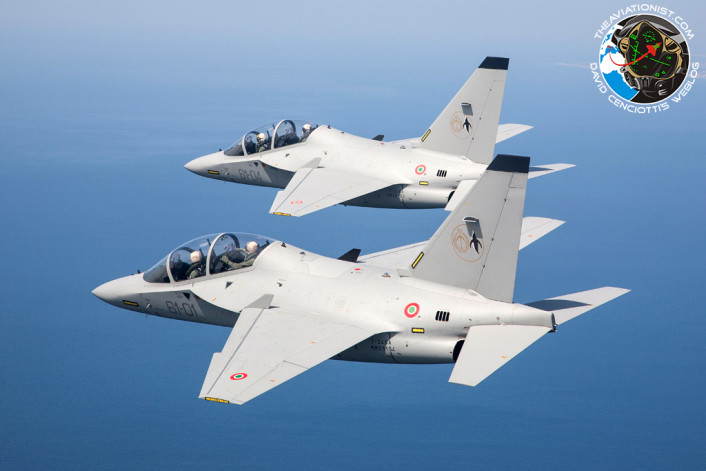 Needless to say, along with the training mission, such a plane can be used for operational roles, thanks to Electronic Warfare System Radar Warning Receiver (RWR) and a Chaff & Flare (C&F) dispensing sub-system and to seven hardpoints that enable the aircraft to carry a wide variety of air-to-air and air-to-ground weapons, including the AIM-9L and IRIS-T air-to-air missiles, a 12,7 mm Gun Pod, and BRD (Bomb Rocket Dispensers).

The aircraft is so advanced that it is considered one of the best candidates for the T-X program, to replace the U.S. Air Force Northrop T-38 Talon, even though the future of the T-100, the T-38 replacement offering based on the M-346, is unclear after General Dynamics has withdrawn itself as the prime contractor for the bid. 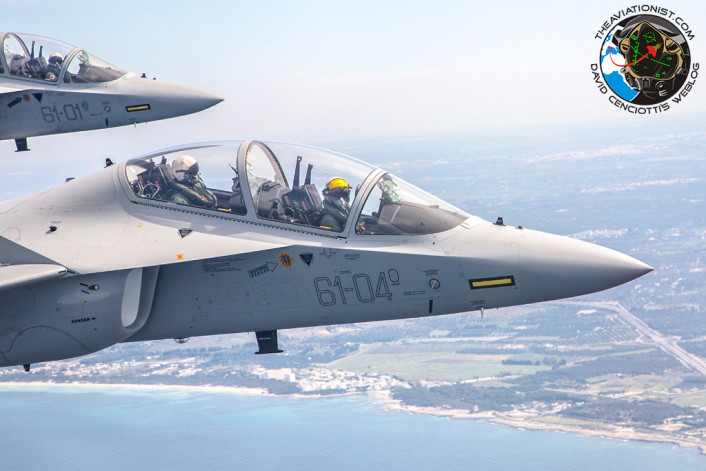 Recently we had the unique opportunity to take part in a training mission from the back seat of an Italian Air Force M-346 “Master”. And we did it from Lecce Galatina airbase, in southeastern Italy, home of the 61° Stormo (Wing), where Italian and international aircrews are trained, by far considered one the best candidates to become the European Air Training Center, a multinational flight school responsible for the training of allied pilots in accordance with NATO’s “pooling & sharing” concept: share the best assets in order to save money. 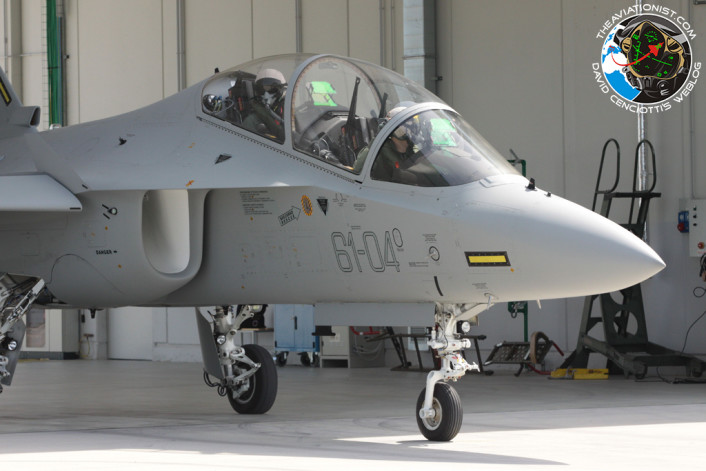 Four T-346A jets (as the M-346 is designated in accordance with the Mission Design Series of the Italian Air Force) are assigned to the 212° Gruppo (Squadron), one of the three squadrons (the other ones being the 213° and the 214° GIP) of the 61° Stormo. The task of the 212° Gruppo is to provide a training tailored to the needs of the frontline squadrons. “The courses delivered here at Galatina on the T-346A aim to bring the student pilots to the skill set required by the three Italian Air Force OCUs: the 101° OCU for the AMX, at Istrana; the 102° for the Tornado, at Ghedi; and the 20° for the Eurofighter, at Grosseto,” says Col. Paolo Tarantino, commander of the 61° Stormo. 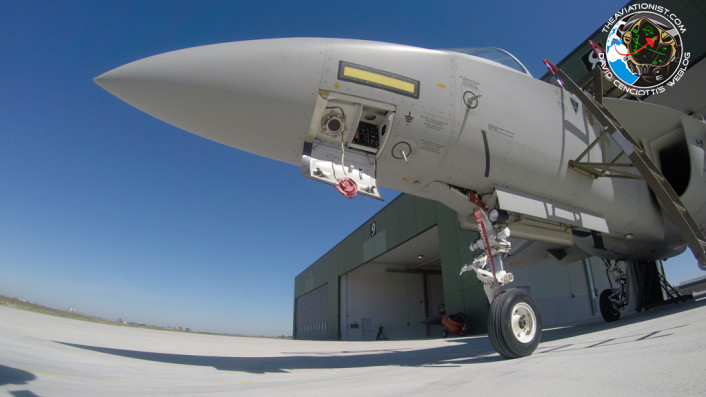 “With the M-346, the training syllabus can be split into ground and air segment: half of the flight hours are flown in extremely realistic simulators and the remaining half is flown on the actual plane. Furthermore, the induction of a new trainer with an in-flight sensor and scenario simulation can “download” forefront combat planes’ workload to less expensive but highly advanced trainers with a significant cost reduction.” 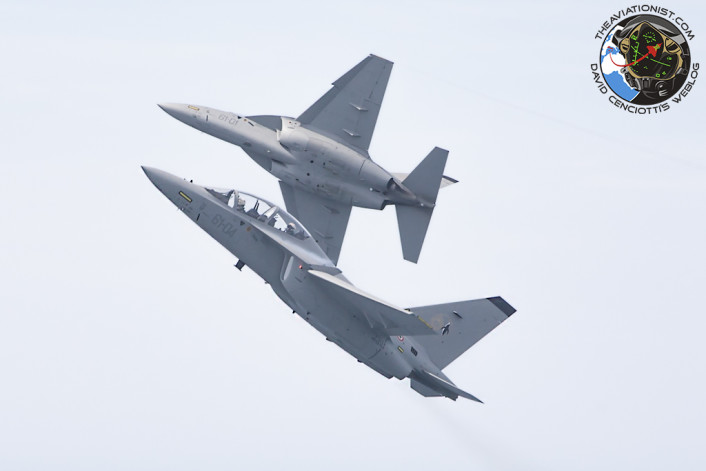 On Apr. 16 this Author had the opportunity to be the first journalist to fly in the ItAF T-346A and here’s a brief report of the mission.

It’s Apr. 15 and I’m on the backseat of one of the four T-346A already assigned to the Italian Air Force.

In the front seat, currently talking on the radio, there’s Maj. Alessandro Olivares, commander of the 212° Gruppo, an IP with 2,500 flight hours and a wide experience in real operations flying the Tornado fighter bomber. In front of us, there are two T-346As waiting for the clearance to line up on the runway: the plan is to take off in sequence, rejoin and proceed to a working airspace located off the coast to the southwest of Lecce. Once in the area, we will split from the other two 346s and work a bit on the air-to-air mode to shoot some (virtual missiles) against them.

The cockpit is quite large, with a HUD in front of me showing the relevant flight parameters, radio channel, distance from the selected bullseye, attitude indicator and any other information required to fly the plane while looking outside. The front panel includes digital instruments and three MFD (Multi Function Displays) that can be arranged at will, to show the nav menu, the system status, the engine status, the moving map, etc. The visibility is excellent from the backseat.

We enter the runway and prepare for take off. We complete the run-up bringing the engine power to the 80 percent. The two T-346As start the take off run with a separation of 10 seconds. Once the stopwatch reaches 20 seconds, Olivares brings the throttles to the maximum power and we start rolling as well.

The acceleration is simply impressive; comparable to those of fast jets equipped with afterburner. In 11 seconds we reach 120 knots and rotate. We are airborne. 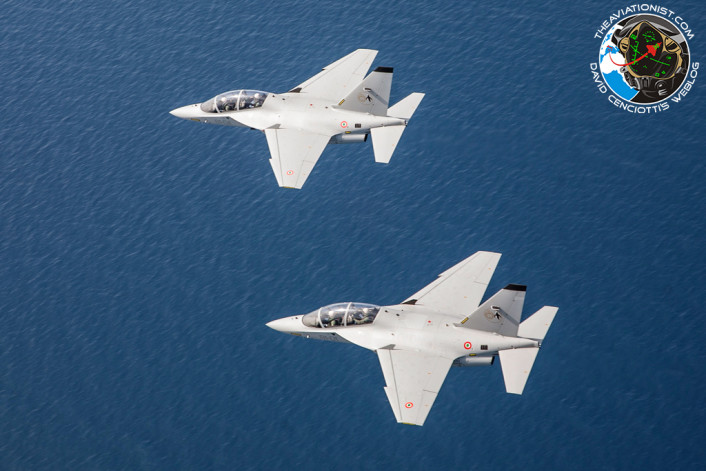 We soon reach 2,500 feet, at 400 knots and we rejoin with the rest of the formation to head towards the operative area. The position of the two T-346s is clearly shown on the map thanks to the datalink. 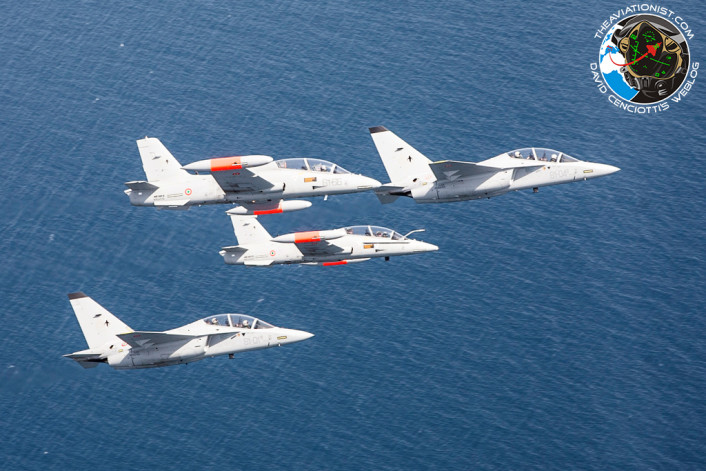 We transition to the working area briefly joined by an MB.339A and an MB.339CD, the other two types flown at Lecce, and once on the pre-planned breaking point, we split to work a bit with the radar. 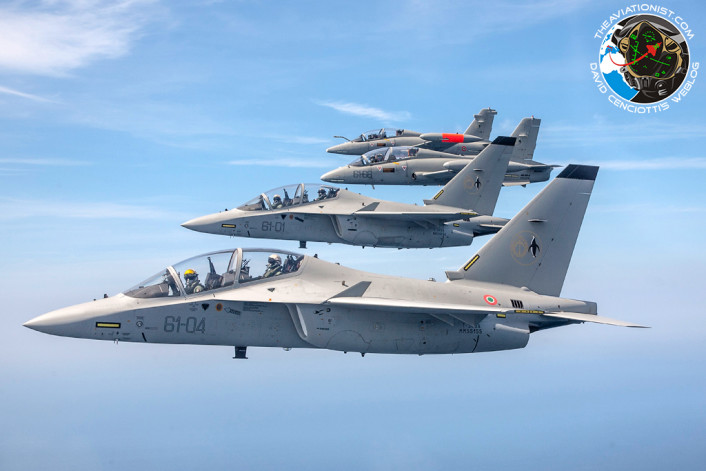 Now the datalink provides the information that the on-board computer translates into a radar picture. We can work on both TWS (Track While Scan) and RWS (Range While Search) radar modes and, using the button on the throttle, select any of the tracks to lock the target.

Using the buttons on the throttle, we can select the scale and aperture of the radar. 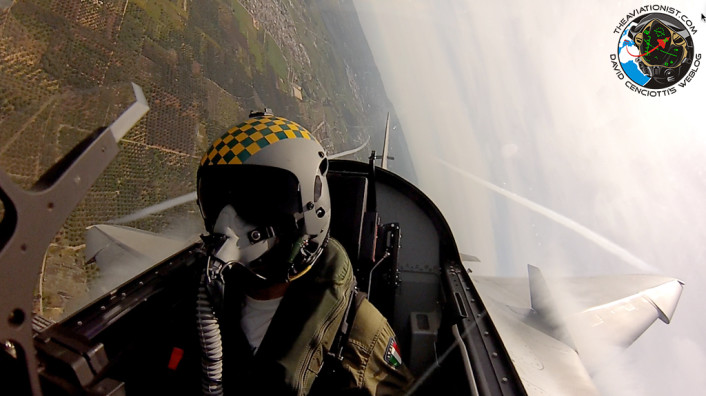 What is more, the datalink can be used to send encrypted messages or to provide information about the other planes’ configuration: in this case, the two M-346s carry 2 AIM-9L and 4 AIM-120 AMRAAMs.

We select TWS to scan the airspace from ground to 42,000 feet and we lock one of the two distant targets: the HUD symbology reacts accordingly showing the locked “enemy”. Distance to the target, closure speed, missile range are shown until the message “shoot” appears, stating that we are ready to fire our simulated air-to-air missile. After a couple of turns we terminate the engagement and reposition for another one. 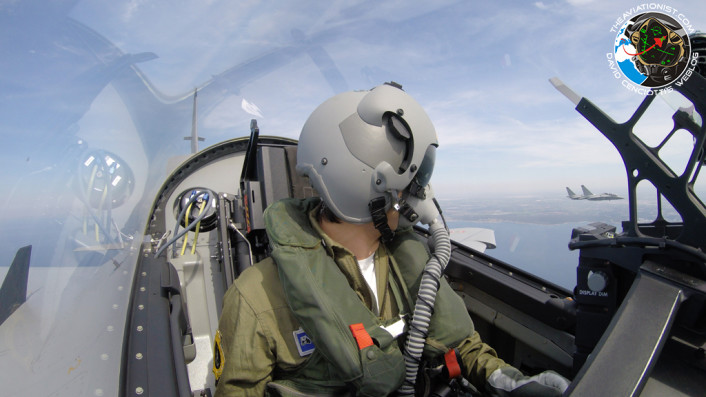 Once again, we find the target on the radar, lock it, wait until at the right distance for using the AAM and this time, we shoot a missile. “M346 hit” message appears shortly thereafter on the MFD providing a real-time kill notification.

The aircraft provides the pilot with the same “user experience” as if he was using an APG-80 radar. Awesome.

After some more air-to-air activity, we engage another working area for some free flight, during which Olivares shows me the maneuverability of the plane. The autotrim feature is quite useful, while the way the engines react to the throttle is pretty impressive. I’ve also the opportunity to taste the flight controls and HOTAS to perform some basic maneuvers. A breathtaking 280°/s aileron roll (performed by the pilot in the front seat) ends this part of our flight.

Noteworthy, we make extensive use of the Voice Command (VC), to change radio channels or to squawk “ident” to the Air Traffic Control radar. I can even give it a try: I activate the VC with my left finger on the throttle button and by saying “Radio 2, Channel 19” I instruct the plane to select a new radio frequency.

The VC can be used to know the fuel to bingo (in our case 140 kilograms) or to change the MFD arrangement to show the Map on the central display.

Unfortunately, it’s time to return to the base.

We coordinate with the Approach the exit from the area and head towards the base to fly a straight in approach to runway 32 at Lecce. Once established, with the field in sight, below 250 knots, we extend the landing gear and at 200 kts we lower the flaps. 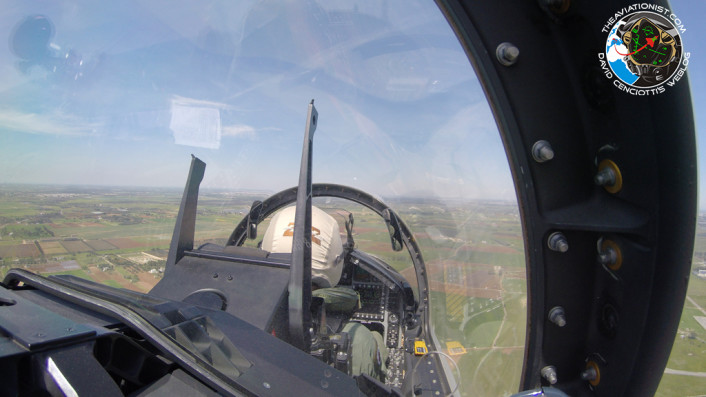 The final is flown at 120 kts with 8° AOA (Angle Of Attack), following the guidance of the HUD that helps us correcting the wind drift.

After the touchdown at 110 kts, Olivares shows me the aerodynamic braking. The aircraft decelerates to 80 kts and gently lowers the nose. 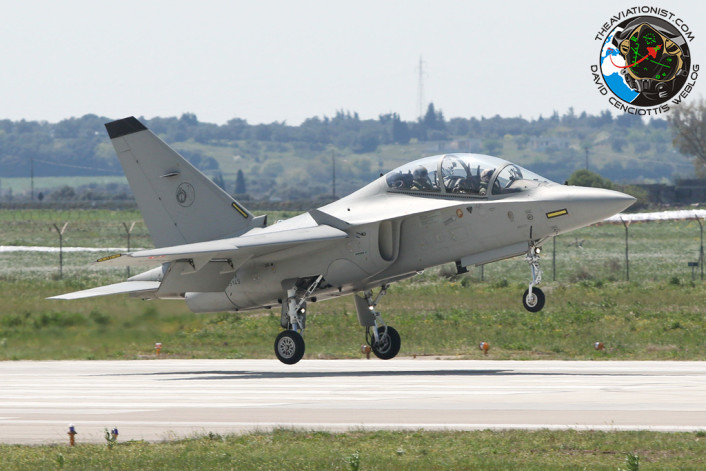 We have landed after a really interesting 70-minute flight during which we have had a taste of one of about 20-30 air-to-air modes the aircraft can provide.

“Impressive” and “Awesome” are the adjectives that I’ve used the most to describe such an experience. Stay tuned, there is more to say about the T-346A and this flight…. 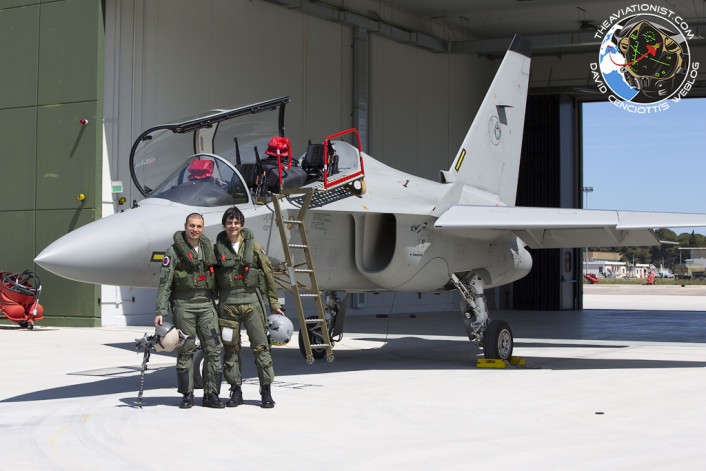 The Author wishes to thank the Italian Air Force Press Office, the 61° Stormo and its Commander Col. Paolo Tarantino, and the 212° Gruppo for the support provided in preparing the article. A big thank you to Iolanda Frisina and Alessandro Borsetti who contributed to the report.