The top image, taken by The Aviationist’s contributor Giampaolo Mallei, shows the “Master” returning from a test sortie with a belly fuel tank, sporting the typical black and white photographic reference targets which are used to assist in gauging how external stores (weapons or drop tanks) separate from the plane while analysing the footage recorded by hi-speed cameras attached to the aircraft (you may see one of these, painted orange, underneath the left wing tip).

The fuel tank was reportedly jettisoned on a subsequent sortie; the image below shows the plane returning to the base after the in-flight test. 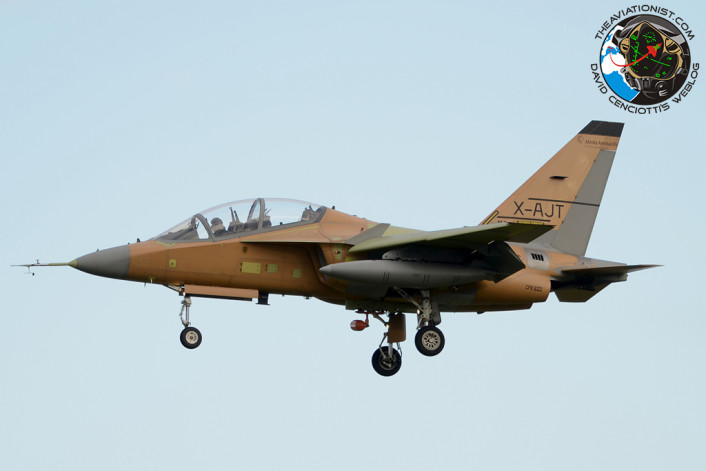 The M-346 has been selected by the Italian Air Force, the Polish Air Force, the Republic of Singapore Air Force and the Israeli Air Force that will use the “Master” to replace the A-4 Skyhawks.

The Italian Air Force has unveiled a new indigenous trainer: the T-344 V.E.S.P.A.

Taken at Decimomannu airbase last week, by Gian Luca Onnis, the following picture is the only available to date, of an M-346 advanced combat trainer flying with a BRD (Bombs and Rocket Dispencer). Such pod, […]