We just know that the gigantic UAV (Unmanned Aerial Vehicle) is taking part to Operation Inherent Resolve, the U.S.-led operation against Islamic State in Syria and Iraq from an undisclosed location in southwest Asia that, based on photographs and other reports, should be Al Dhafra airbase in the UAE.

However, the Air Force has recently released a tidbit about its Global Hawk aircraft 2019 (or “A2019”), an RQ-4 Block 20 unmanned system which has recently surpassed the 10,000 flying hours. Interestingly, the milestone was achieved on Mar. 7, shortly after dawn, during a 30.5-hour mission over Syria or Iraq: almost a record considered that the record for the longest Block 20, held by the same A2019 aircraft, is 31.5 hours.

Interestingly, “A2019” was the first block 20 and first RQ-4B model to be deployed in the region on Oct. 16, 2010. It carries the Battlefield Airborne Communications Node (BACN) payload, which replaces the imagery sensor package normally installed in the aircraft, and its role is to support ground ops by relaying communications between people and aircraft as well as enabling airstrikes on the Islamic State militants.

Three RQ-4B have been converted into EQ-4 and carry the BACN payload instead of the sensors fielded with imagery intelligence (IMINT) sensors.

“It is primarily a data and communications bridging node. It can support multiple bridges simultaneously across multiple radio types. We like to call it ‘Wi-fi in the sky'” said Lt. Col. Anthony, launch and recovery element operations supervisor in a post on the Air Force website.

While EQ-4 performs its communication relay mission, manned and unmanned aircraft provide ISR (Intelligence Surveillance and Reconnaissance) support to Operation Inherent Resolve by gathering information about the security situation on the ground.

Although the article does not mention it, it would be interesting to know which ground or air assets, require to be interconnect with a BACN platform. Most probably, the F-22 or the B-1s, with other planes.

Hence the need for a “flying gateway” as the EQ-4. 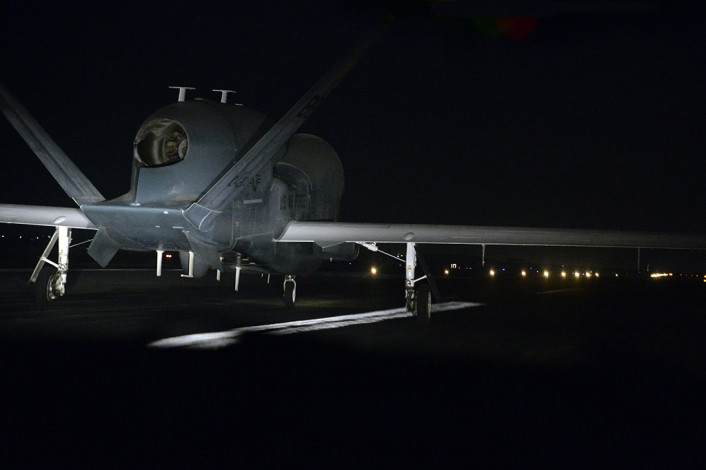 You don’t happen to see an aircraft carrying two dummy nuclear bombs very often. As we reported in July 2015, the U.S. Air Force is conducting a series of test drops, in Nevada, of the […]