According to an Air Force press release, the F-35 jets may face another issue.

The problem is not related to the jet itself, but to the fuel trucks thermal management: the Lightning II has a fuel temperature threshold and may not function properly if the fuel is delivered to the aircraft at high temperature. Should the temperature of the  fuel get too high, the F-35 could face engine shutdowns.

Therefore trucks at Luke Air Force Base, in Arizona, where temperature can reach beyond 110° F (43° C) in summer months, were given a new look, by applying a two layer coating, dubbed “solar polyurethane enamel”, that will help prevent fuel stored in the tanks from over-heating.

However, the professionals providing the new coating of the trucks, said that the layer does not necessarily need to be white, since only the “reflective” coating is of white color. Additional green paint may be applied in order to add camouflage. Some of the Luke AFB specialists stated that this is still to be tested.

Nevertheless, the ground crew hope that the green color can be used again, keeping the temperatures down, since the white refueling trucks are visible at long distances. 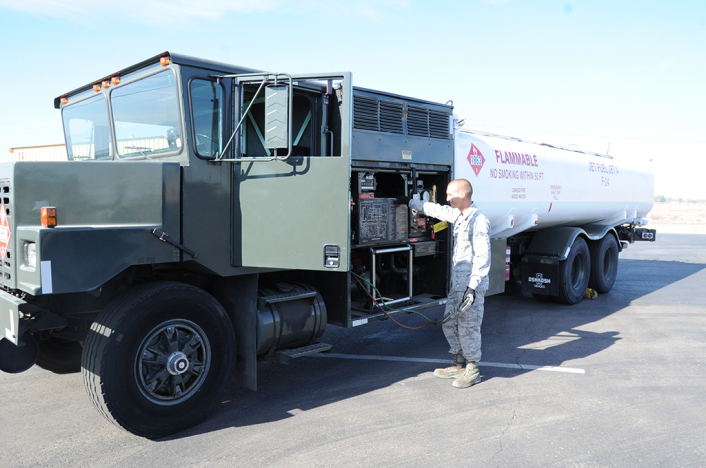 White color is a definitely an intermediary-short term fix, mainly due to the tactical deficiencies it brings along. Long-term solutions?

The Air Force may change the composition of the fuel used by the Lightnings.

Another option is to refine the software used by the engine. Cost-wise, both these options are more expensive than re-painting the fuel trucks, which, as the Air Force claims, costs $3,900 per truck.

In the light of the more significant problems faced by the F-35 program, the fuel issue might just simply have been overlooked.

Nonetheless, as some analysts pointed out, it may add an overhead in terms of cost, management, procedures etc. meaning that the development of the F-35 would become a bit more expensive (and this would not be a good news).

MQ-4C, E-2C, C-2A, P-8A, F-35 and SH-60R flew over USS Zumwalt in Chesapeake USS Zumwalt, the U.S. Navy’s newest and most technologically advanced surface ship, was commissioned in Baltimore, Maryland, on Oct. 15 during the […]

On Nov. 29, the Norwegian company Kongsberg and the Norwegian Ministry of Defence unveiled the first fuselage of the Joint Strike Missile (JSM) that is being developed for the F-35. The JSM is a multi-role […]