On Aug. 19, two Tornado aircraft, belonging to the 6° Stormo (Wing) of the Aeronautica Militare (Italian Air Force), crashed after colliding midair near Ascoli Piceno, in central east Italy. The fate of the four crew members (each aircraft is flown by a pilot and a navigator) is still unknown.

Two rescue helicopters of the Italian Air Force (an HH-3F and an HH-139) and reconnaissance planes are involved in the rescue efforts.

Very few details about the incident have been disclosed other than the two aircraft, had departed from Ghedi airbase for a pre-planned, low level training mission.

According to the Italian Air Force spokeperson, the four pilots ejected (since the locator beacon signals for both ejection seats have been received) but none has been found and rescued yet.

The Italian State TV RAI aired a couple of images obtained by a witness who took some shots of the fireball generated by the collision of the two fighter bombers. No parachute can be spotted in the low quality sequence (most probably taken with a smartphone’s camera). 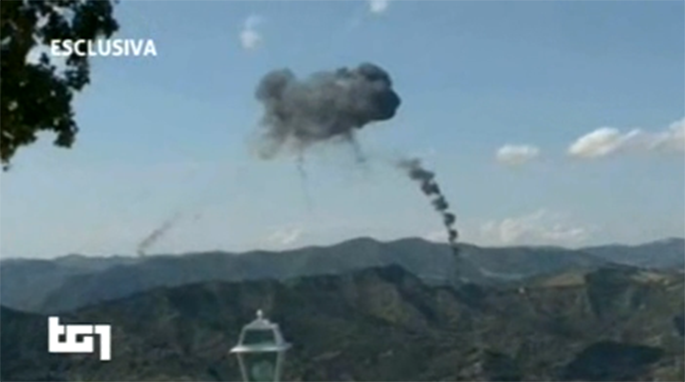 Mid-air collisions between military jets occur every now and then for various reasons. In 2012, two RAF Tornado GR4s were involved in a similar incident which cost the life of three British officers.

As already explained on this blog, there is always the risk of a mid-air collision when two fast jets fly in a tactical formation or somehow close to each other.

In order to celebrate the 75.000 flight hours with the C-130J, the 46^ Brigata Aerea of the Aeronautica Militare (Italian Air Force, ItAF) prepared an interesting Special Colour. Actually it is not a special coloured […]