“Two F-16C Falcon single seat aircraft, assigned to the 113th Wing, D.C. Air National Guard, were involved in a mid-air collision Aug. 1. The aircraft were on a routine night training mission off the coast of Chincoteague, Va., approximaley 70 miles southeast of Washington. The accident occurred over water at 10:28 p.m.

One pilot ejected from his aircraft safely and inflated his emergeny raft. He was recovered by members of the U.S. Coast Guard Air Station Elizabeth City at 12:30 a.m. Aug. 2. The second pilot and aircraft was able to return to Joint Base Andrews without further incident.” 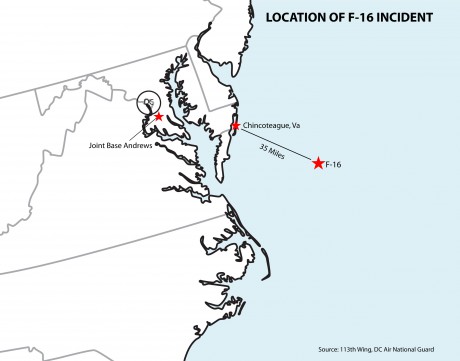 Following the above news of a midair collision, many readers of The Aviationist asked how this kind of incidents may happen.

There is always the risk of a midair collision when two (or more) aircraft fly close to each other. Even if some collisions in the past took place because of failures or during engaments, air-to-air combat maneuvering, many (more) have occurred as perfectly working aircraft were rejoining the formation.

That phase of the flight can be extremely dangerous, especially at night: the two pilots, flying in a tactical spread formation, have to tighten the formation. The lead aircraft is reached by the wingman, with the latter initially forced to keep a higher speed (otherwise it would not reach the leader) and then to suddenly reduce his speed to match the leading plane’s airspeed. A distraction can be fatal.

And don’t forget how close the aircraft fly from that moment until landing: once again, a sudden move, a distraction, hence a human error could cause the midair.

Pilot from 115th Fighter Wing who went down over Hiawatha National Forest has been identified. Flights grounded following the crash. The Wisconsin Air National Guard F-16 pilot who crashed Tuesday night, December 8, 2020, and […]

The following pictures were taken at Nellis Air Force Base, Nevada, on Jan. 31, 2013. They show a B-52H Stratofortress assigned to the 20th Bomb Squadron, from Barksdale Air Force Base, Louisiana, flying a Red […]