Since the NATO is taking over all military operations in Libya from coalition forces under UN Security Council resolution I renamed the daily Debrief accordingly: present and future debrief will be titled .

The situation hasn’t changed much since yesterday. Coalition aircraft are more or less continuosly pounding loyalist around Sirte and Sabha, which yesterday early morning were (probably) “visited” by 2 B-1Bs from Ellsworth AFB which crossed the Atlantic ocean on their way to the Libyan airspace. The pair of “Bone” (from “B-one”) were initially accompanied by another flight consisting of 2 B-1, acting as spares, and were supported by various tankers along the way. If the Global Power “show of force” was worth the effort (in terms of fuel, flight hours, involved crews and, above all, required tanker force) is hard to say. Considering the relatively small amount of US bombers deployed in the region (the F-15E Strike Eagles operating from Aviano airbase) the possibility to concentrate in a single mission 48 JDAMs (2 x 24) could justify the long trip.
It is not clear now whether the two B-1s returned to the CONUS (Continental US) after their mission or landed elsewhere. If they did not return to the US flying back through the Mediterranean Sea maybe they exited south-east bound crossing the Sudanese airspace on their way to the Indian Ocean. This is just a speculation because, on Mar. 25, Reuters reported that Sudan had given permission to the allied aircraft to use its airspace for airstrikes on Libya but, on Mar. 26, Sudanese Foreign Ministry’s official spokesman denied reports about a secret airspace usage authorization. According to analysts consulted by Reuters, Khartoum was not willing to make the permission official because of the fear of possible revenge on some 500,000 Sudanese nationals currently staying in the troubled North African country. 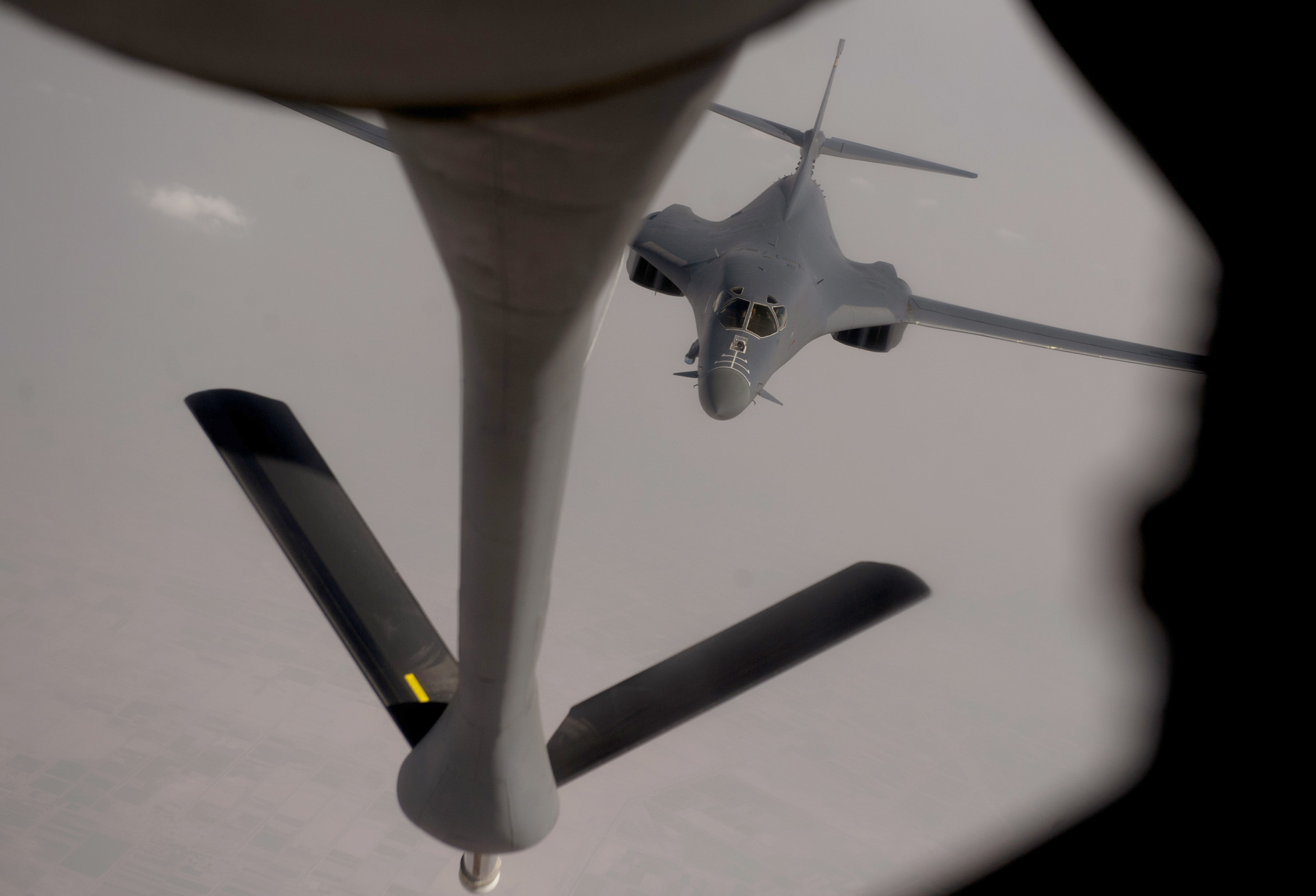 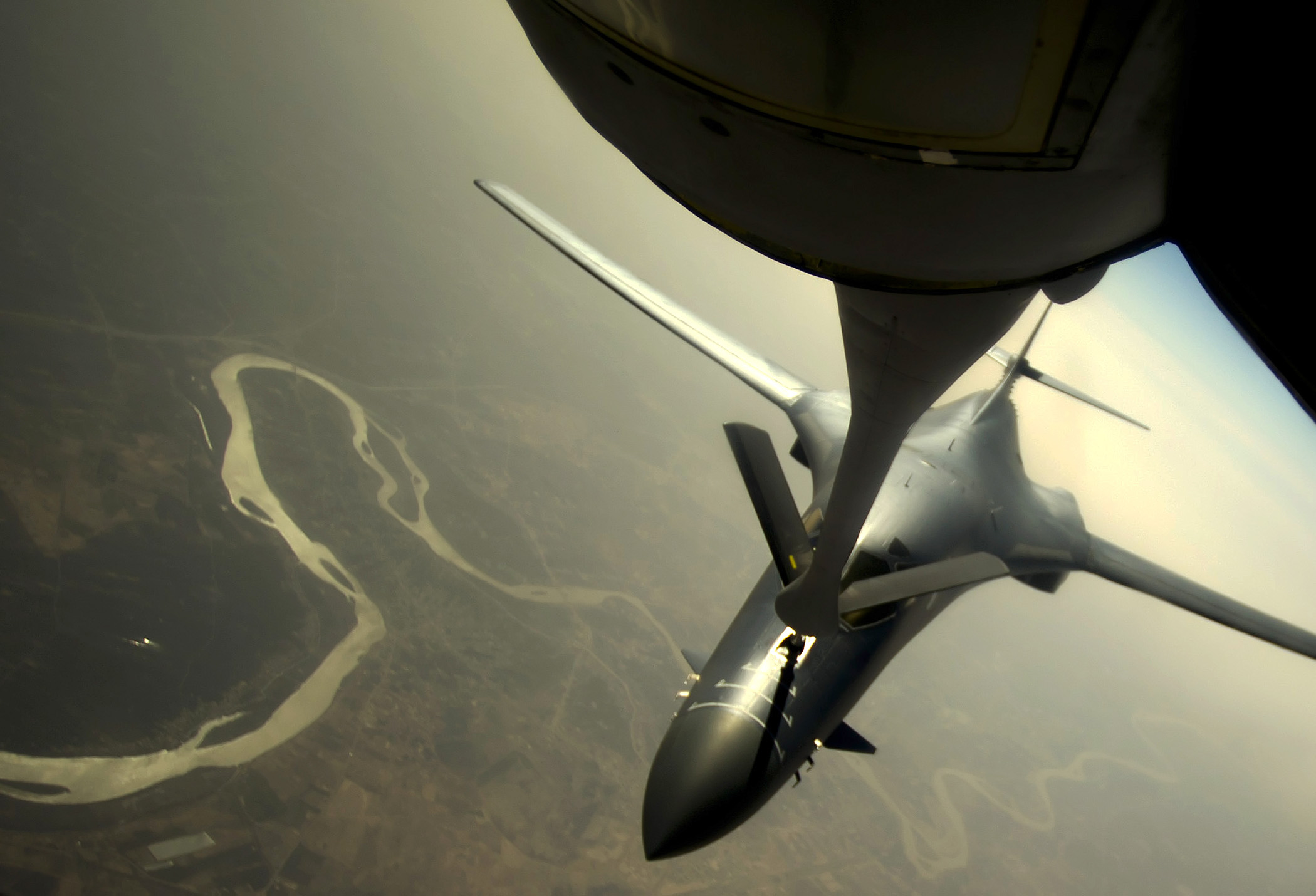 In the last press update VADM William E. Gortney Director of the US Joint Staff explained that the coalition flew 178 sorties with the majority being strike-related. The number of sorties is growing, “but the labor share [between U.S. and partner nations] is definitely evening out” he commented. United States is providing 80% of the air-to-air refueling, 75% of aerial surveillance hour and 100% of electronic warfare missions. Most of targets hit once again were targets of opportunity.

Involved again in a long range attack mission against ammunition dumps used by the regime to attack the city of Misratah were also some RAF Tornado GR4s which flew from RAF Marham in the UK and were refuelled en route by a Tristar tanker aircraft from RAF Brize Norton. According to the British MoD, Tornado GR4s performed a strike mission against bunkers in the Sabha area, in southern Libya, hitting with Storm Shadow stand-off missiles bunkers, following armed reconnaissance sorties over Libya during the weekend during which RAF Tonkas hit a total of 22 tanks, armoured vehicles and artillery pieces in the vicinity of Misratah and Ajdabiya. Battle Damage Assessment suggest that the bunkers have been destroyed. More than 120 sorties were flown by the RAF contingent of Operation Ellamy totalling 250 flight hours as part of the international action in Libya, David Cameron told the House of Commons today. 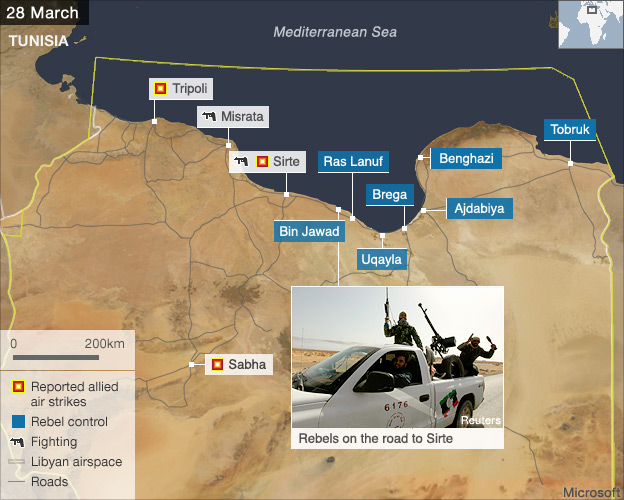 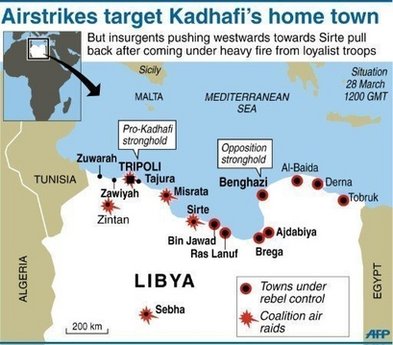 As commented yesterday, allied strikes against Gaddafi’s forces are giving the rebels the advantage they need to repel loyalist attacks, even if someone is suggesting that the coalition activity is essentially providing air cover for the oppositors’ advance, something that would be in contrast with the aim of the mission……I think with the NATO command allies will have to negotiate a little to approve the daily list of targets.

1) To facilitate the delivery of humanitarian aid, Turkey will take over the running of the airport in Libya’s rebel-stronghold Benghazi. According to the Turkish Prime Minister Recep Tayyip Erdogan the agreement was concluded with local authorities. Time to re-open the airspace around Benghazi with corridors enabling transport aircraft to fly across the No-Fly Zone to the Benina International Airport.

2) This war is characterized so far by an unprecedented media coverage. Most important TV networks, news agencies and newspaper are giving continuos update with reporters and photographer working both inside Libya and at the main airbases and commands in Italy and abroad. Live blogs are constantly updated so as image galleries showing every detail of the Unified Protector (Odyssey Dawn) operation: from the aircraft loaded with bombs, to the female crew members (that are always under the spotlight) of the various military services involved in the operations. For instance, as mentioned in the previous reports, in Italy, on-line newspapers have been acting as an invaluable source of information about missions flown from local airbases with typical news as “Five Tornados have just departed from Trapani Birgi airport. Two Canadian F-18s that had departed at 12.30 landed around 18.00” or “a German spy ship has just entered Cagliari port”, and so on.
Obviously, few seconds after being published on any website, such information spread as a consequence of the power of the social networks, which amplify the normal reach of any information, rendering it really global.

However, constant updates, tons of articles and many experts or wannabe ones that are trying to explain everything about the war, has made media operators eager to provide fresh or exclusive information, possibly earlier than any other news agency. In order to reduce the “time to market” some journalists are using shortcuts, writing articles with glaring errors which show how poor investigation on a particular subject was. If such errors appear in a Live Blog update it’s not big deal but when mistakes surfaces in an article supposed to require a preliminary study published on the website of an international news and current affairs television channel, that’s a serious problem. Just a couple of examples:

Larepubblica.it published yesterday the a news update on its Libya live blog about two US military airplanes which, returning from a mission, performed an emergency landing in Ancona – Falconara because of fuel problems. The news refers to two A-6 Intruder even if the type was retired almost 15 years ago hence the aircraft were probably A-10s or EA-18 Growlers.

France24 published an article on Odyssey Dawn and about the military ops information being available on the Internet. Mentioning me and this weblog the author, explaining that I’m using Flightradar24 says:

he deciphers the military messages which are full of codes, and also gives his own military and strategic analysis of operations underway.

3) The Italian MoD has announced that 4 AV-8B+ belonging to the Marina Militare (Italian Navy) and operating from the Garibaldi aircraft carrier, along with 4 Eurofighter Typhoon were trasferred under the NATO control and will be employed for the enforcement of the NFZ within the mandate of Op. Unified Protector.

4) An Associated Press article published on Mar. 28 provides some interesting details about the Qatar Emiri Air Force operations from Souda Bay. Here’s an excerpt of the article written by Schreck.

Qatar has about 200 pilots and crew at Souda. They have been paired with the French partly because the two countries have worked and trained together for years under bilateral defense accords.

Under the escort of Lt. Gen. Antonios Tsantirakis, the commander of Greece’s tactical air force, the French and Qatari commanders toured the quickly assembled operations center in Souda.

One Qatari officer asked for better intelligence information about events on the ground, and his superiors pledged to provide more. The rank-and-file Qatari and French airmen didn’t want their full names used, citing security reasons.

Qatari and Greek fighter planes are scheduled to fly extra training missions over the Mediterranean this week to help Qatari pilots understand the area better.

Shortly after returning from a flight Sunday over Libya, a grizzled Qatari colonel with salt-and-pepper hair was matter-of-fact about Qatar’s role.

“For us, this is a good first experience to come here, so far from our home base,” he said, walking on the Souda tarmac. “For us, it’s not a matter of Libya or Gadhafi, this is to enforce the U.N. no-fly zone. I’m not going to go into the political side of it.”

One young Qatari officer said in English that his country was involved in the Libya campaign, “to save the world.”

One officer who did give his name, 2nd Lt. Naveed Ashraf, a Pakistani technical adviser for the Qatari Air Force, insisted that Islam, the main religion in Qatar and Libya, shouldn’t be part of the equation — but Gadhafi’s onslaught against his own people should be.

5) Thanks to TJ a visitor of this site I’ve discovered a video from Sky News  showing the remnants of an AGM-88 HARM near Tajura. The video shows also the footage of a destroyed mobile radar near the farmhouse where the AGM-88 Harm fins are filmed. The ‘bullet holes’ described by the reporter and shown in the video should be from the AGM-88 warhead. This is the first and only evidence I’ve found so far that at least an AGM-88 was launched during Odyssey Dawn/Unified Protector campaign. 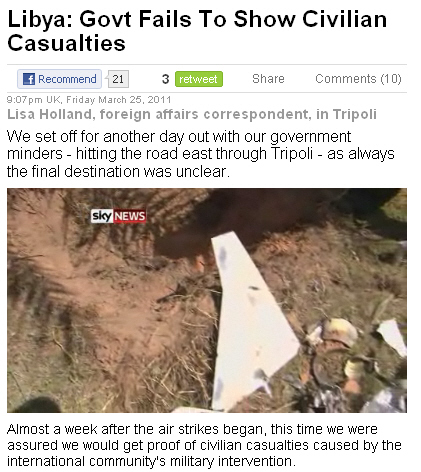 Here’s a screenshot clearly showing the AGM-88 fin. You can watch the video here.

6) Michaël Svejgaard, a retired Col. and Allied Force and Enduring Freedom Veteran pointed me to the patch that was created by the RDAF. Interestingly it contains a hidden peace message for the Libyan people with the Arabic text “Peace for the People of Libya”. 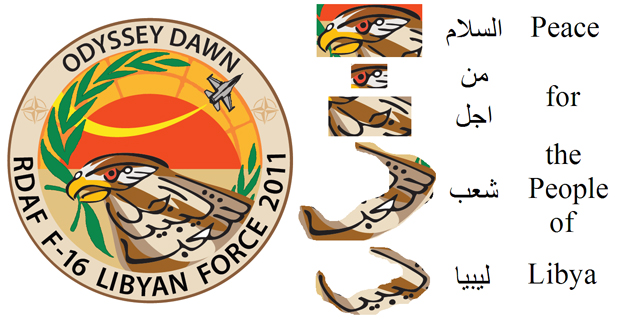 An unexploded “Hakim” is blown up by MAG (Mines Advisory Group) at Zintan airfield during a demo last week. Photo credit: MAG The MBDA PGM-500 “Hakim” is a 500-lb guided bomb that was carried by […]

[Updated] Greek F-16 has reportedly crashed on TLP apron during take off from Albacete. Other aircraft reportedly hit

Four Hellenic Air Force Vipers made a fuel stop in Italy on their way to Poznan, Poland. NATO Tiger Meet is an annual exercise that gathers squadrons sporting Tiger (or feline) emblems. The Exercise’s distinctive […]