About four years ago, Russia’s next generation stealth bomber’s conceptual design was given the official approval. Now it looks like there is a go ahead to build the new aircraft.

According to the latest update by the state-run Sputnik news media outlet, the new strategic bomber is expected to make its first flight sometime before 2021, with the first deliveries starting a couple of years later even though this seems to be rather optimistic, considered that back in 2013, the plan was for the PAK DA to enter production stage by 2020 with the first bomber in active service by 2025-2030 timeframe.

Anyway, the stealth bomber will be a flying wing design and subsonic: unlike the American X-51, Falcon HTV-2 and other hypersonic development programs on which U.S.’s perspective strike capability could be based, the new Russian bomber will not even be supersonic. The loss in speed will be compensated with advanced stealth, electronic capabilities and an artificial intelligence-guided missile.

“It is impossible to build a missile-carrying bomber invisible to radars and supersonic at the same time. This is why focus is placed on stealth capabilities. The PAK DA will carry AI-guided missiles with a range of up to 7,000 km. Such a missile can analyze the aerial and radio-radar situation and determine its direction, altitude and speed. We’re already working on such missiles,” Russian Aerospace Forces Commander Viktor Bondarev was quoted as saying by the Russian newspaper Rossiskaya Gazeta.

The Russian flying-wing will be capable of carrying air-to-surface and air-to-air missiles as well as conventional and smart-guided bombs. A 2016 report mentioned that the PAK DA was expected to have a range of 6,740 nautical miles. It will also be able to carry 30 tons of weapons.

An unmanned “sixth-generation” strategic bomber based on the PAK-DA that could come around 2040-2050 was also rumored years ago and, based on last year’s statements, Russia has already started working on both 6th and 7th Gen. combat planes.

Still, whether Moscow will be able to operate the new stealthy bomber (and/or a next generation radar-evading 6th or 7th generation tactical plane) in the near/medium future is hard to say.

The optimistic claims surrounding the abilities of the new aircraft types being developed, their sensors and weapons will have to be backed by facts: indeed, unlike the U.S., that have been operating 5th Gen. aircraft (the F-22 and, with more difficulties, the controversial and troubled F-35), stealth aircraft and active electronically scanned array (AESA) radars for years, so far, Russia has not been able to operate a next generation stealth aircraft nor AESA radar system (both ones are still at the testing stage). 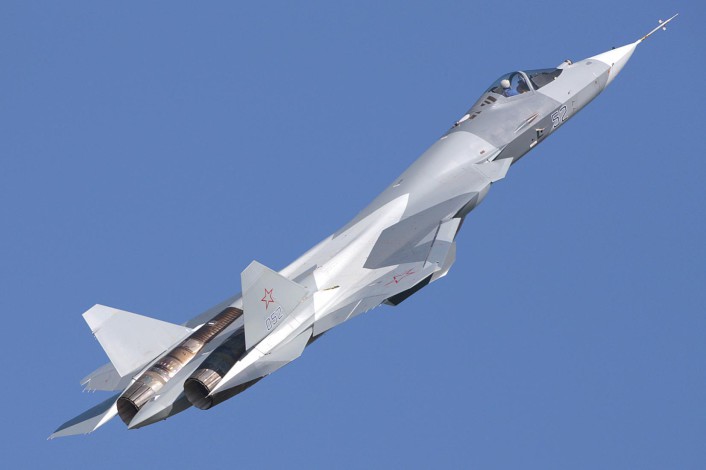 Let’s not forget that the 5th generation T-50 PAK-FA has yet to be formally inducted into active service by the Russian Aerospace Forces. Furthermore,  all the most futuristic programs (including the already mentioned F-35) have proved to be subject to various development issues, cost overruns and delays.

As already explained here in the past, Sukhoi might base its 6th Gen. on the PAK-FA and upgrade the design throughout the years similarly to what they have done with the Su-27 and subsequent supermaneuverable Flanker variants up to the Su-35S.

This means that the PAK-FA will probably become a 5++ Gen. thanks to the planned upgrades and be the base for Russia’s 6th Gen. fighter sometime in the future.

Meanwhile, let’s wait for the PAK-DA that seems to be pretty cool based on the concept art you can find on the Internet.

Beware, top image shows PAK-DA concept (credit: militaryrussia.ru via Sputnik News). The artwork can’t be considered an official image and it may not depict the plane as it is intended to be.

Even though on average there are about about four to six incidents a year Russian planes have entered the Finnish airspace without permission three times in the last week. Finnish Air Force is stepping up […]

Russian Su-27 barrel rolls on U.S. spyplane over the Baltic Sea. Once again.

Another day, another Top Gun stunt in the Baltic. On Apr. 29, a Russian Su-27 Flanker “barrel rolled” over the top of a U.S. Air Force RC-135 which was flying a recon mission in international […]