For the first time bomb markings appear on the F-22s that took part in the air campaign against Daesh.

Everything is stealth in the Lockheed Martin F-22 Raptor, even the bomb signs….

This is what the top image, taken by The Aviationist’s contributor Alessandro Fucito at RAF Lakenheath at the beginning of May, seems to suggest. Indeed, the photograph shows one of the 12x F-22s belonging to the 95th FS from Tyndall Air Force Base, Florida, deployed to the UK until May 8,  with 15 barely visible bomb markings (and another square sign – even though the latter may be some sort of patch on the Radar Absorbing Material coating). 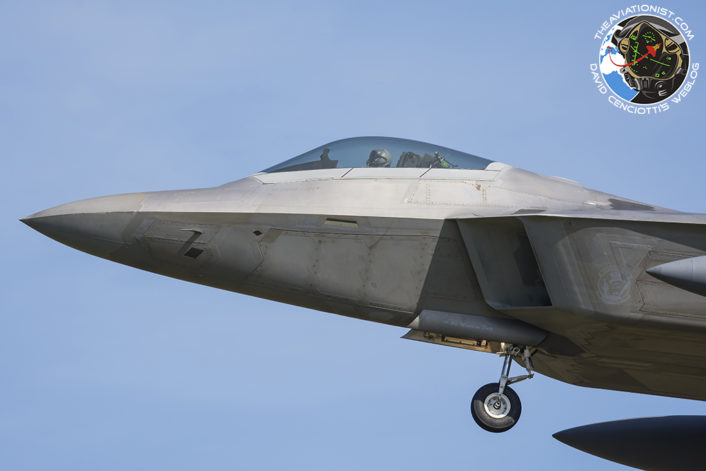 The bomb silhouettes (on the airframe serialled AF05-086) represent GBU-32 1,000-lb JDAMs (Joint Direct Attack Munitions), one of the two types of bombs the 5th generation aircraft is able to carry: indeed, for air-to-surface missions, the multirole stealth jet can carry either 2x GBU-32s or 8x GBU-39 small diameter bombs in the internal weapons bay.

The Tyndall’s Raptor depicted in the photo has most probably been given the traditional bomb markings after taking part in the air war against ISIS in Iraq and Syria during a rotation last year.

The F-22s have had their baptism of fire during Operation Inherent Resolve in September 2014.

Since the beginning of the air campaign, the F-22 have accounted for only 2% of the sorties and 2% of the overall weapons released (that is why it is safe to assume every silhouette represents one JDAM): their role is indeed to use the advanced onboard sensors, as the AESA (Active Electronically Scanned Array) radar, to gather valuable details about the enemy targets and then  share the “picture” with attack planes, command and control assets, as well as Airborne Early Warning aircraft.

This mission has been given a fancy name: “kinetic situational awareness.”

Although its production was cancelled in 2009 with the production line closed in 2012, after 187 F-22s had been procured, the House Armed Services Committee has asked the Air Force to produce a study on what it would take to restart building the Raptor in order to keep up with the enemies until the next generation fighter arrives, something heavily debated recently, and opposed by the Secretary of Defense Ashton Carter.

New ABMS Systems Will Allow Easier Communications Between F-35, F-22 And Other Assets

The new ABMS systems tested on the KC-46 and XQ-58 will act as a translation platform converting messages sent by each aircraft in its native language. The U.S. Air Force 5th generation fighter aircraft, the […]

Emergency Over North Sea: Cockpit Recording Of Aircrew Ejecting From An F-4D Phantom

Ejection caught on tape. The cockpit audio you can find below in the form of video with transcript was recorded in 1975, during a flight that ended with the ejection of a pilot and a […]