The stealth aircraft belong to the 95th Fighter Squadron at Tyndall Air Force Base, Florida, were met by F-15E Strike Eagles from Lakenheath and performed a touch and go at RAF Marham before heading to their final destination, where they will be deployed until May. 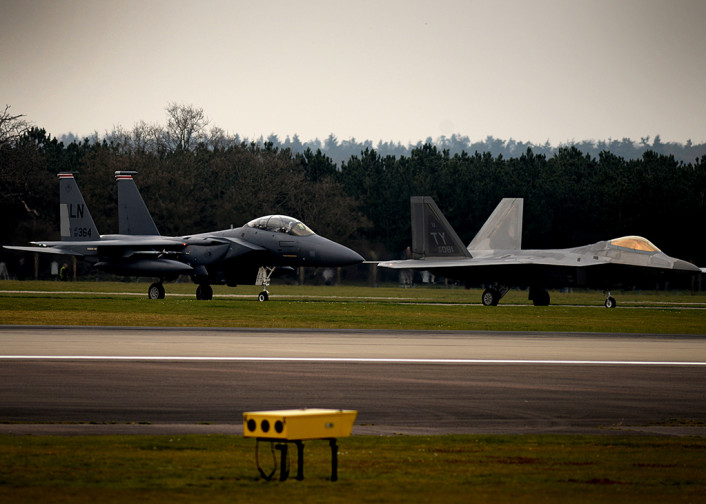 The bit surprising (at least for aviation enthusiasts and spotters) deployment marks the second time the U.S. European Command has hosted a deployment of F-22 aircraft in the EUCOM Area of Responsibility.

Tracking The U.S. B-52 Bombers Deploying To Qatar In Response To Iranian Threat In The Persian Gulf

The U.S. Air Force is positioning four B-52s to Qatar. And, for the very first time, at least one of the Stratofortress bombers could be tracked online as it deployed from Barksdale Air Force Base […]

Hydrazine: A Significant Hazard Each Time An F-16 Crashes (Or Fires Up The Emergency Power Unit)

The recent crash of a South Dakota Air National Guard F-16 into a warehouse near March Air Reserve Base highlights once again the risk associated with Hydrazine leakes. As already reported, on May 16, 2019, […]

We Have Flown in Textron’s Scorpion Jet. Here’s What We Have Learned.

The Scorpion is the iPhone X of Military Aviation. To many, the Textron Aviation Defense LLC Scorpion is an enigma. Though it has capability overlap, the Scorpion is not a traditional Fighter, Attack, Reconnaissance, Observation, […]