After more than 50 years of service, the F-4 Phantom II is about to be retired by the U.S. Air Force.

The final F-4 Phantom appearance at an airshow while in USAF service occurred during Nellis Air Force Base’s Aviation Nation air show, on Nov. 12 and 13.

QF-4E 74-1638, piloted by Lt. Col. Ron “Elvis” King and Jim Harkins, pilots from Holloman AFB, New Mexico, flew at the show on both days, making several passes in afterburner to the delight of more than 295,000 spectators from around the world.

The photographs in this post were taken by our reader Ken Lilly at Nellis AFB during Aviation Nation 2016. 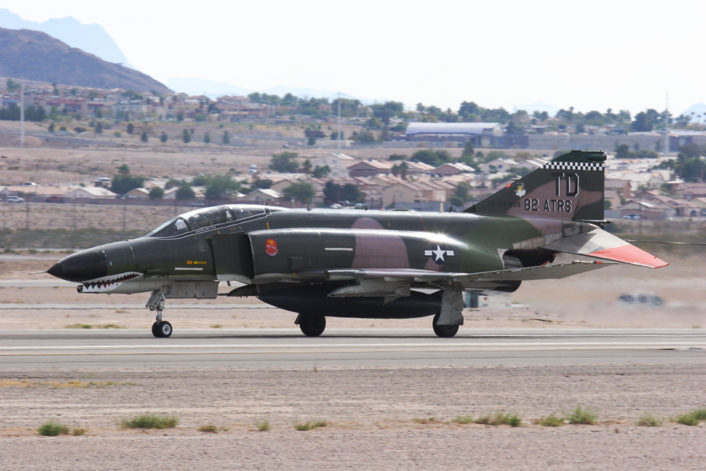 “[The QF-4 retiring] is bittersweet,” said King, 82nd Aerial Target Squadron Detachment 1 commander in a U.S. Air Force release. “It’s been a phenomenal workhorse for our country for years. When the military revitalized the aircraft after retiring them in 1997, it gave them a second lease on life.”

The aircraft have flown as unmanned aerial targets for several DoD and foreign military sales customers testing next generation weapons.

“Just as service members come and go in their military careers, unfortunately so do aircraft,” said Harkins. “It’s getting harder and harder to do the job that it’s supposed to do [based on new technology].

“It’s too old to go as high and as fast or as many [gravitational forces] as the customers need it to so they can proper test equipment,” he added.

Air Combat Command declared initial operational capability for its replacement, the QF-16 full-scale aerial target, that has been flying with the 82nd ATRS, based at Tyndall AFB, Florida, since September 2014, on Sept. 23: therefore the QF-4 flown by the 82nd ATRS Det. 1 at Holloman AFB is being retired on Dec. 21.

Whilst unmanned operations ended in September, the last unmanned mission in a threat representative configuration was flown on Aug. 17, 2016, “against” an F-35 Lightning II.

During that sortie, the Vietnam-era remotely piloted aircraft was shot at by the F-35 Lightning II with two AIM-120 AMRAAMs (advanced medium range air-to-air missiles). However, the aircraft was not destroyed in the test (read more about the final sortie “against” two AIM-120Cs fired by a Joint Strike Fighter here.)

The aircraft, piloted by Lt. Col. Ron “Elvis” King and by Lt. Col. (Ret) Jim “WAM” Harkins, made a couple of aggressive passes through the canyon before continuing their journey to Hill.

The F-4 is one of the most successful multi-role fighter aircraft ever produced. Over 5,000 Phantoms of various models were built and served in combat with a variety of Air Forces around the world. In the U.S., the F-4 served with the US Navy beginning in 1961, followed by the USMC and the USAF.

The aircraft remained in service with the USAF through 1996 when it was retired.

Many Phantoms were converted to service as manned and unmanned targets for weapons training with various USAF and DoD programs, including the White Sands Missile Range.

But the final chapter in a long and successful career in the U.S. Air Force is approaching. At least, other air arms around the world still operate the mighty Phantom, including the Islamic Republic of Iran Air Force, that has also used the F-4E in the Air War in Syria; the Turkish Air Force, whose F-4s have had a role in the coup attempt last July; South Korea’s ROKAF (Republic of Korea Air Force), that has also employed the Phantoms to stage Elephant Walks “against” the North; and the Hellenic Air Force. 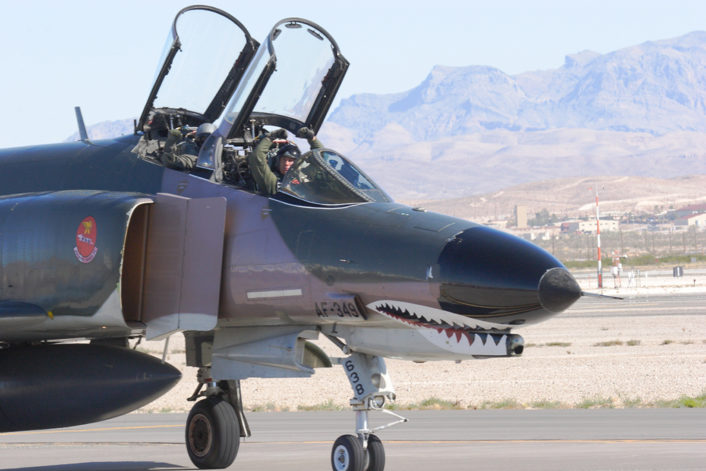 NATO Days in Ostrava 2021: Things Getting Back to Normal?

Ostrava Show Brought Things Closer to Pre-COVID Normal. Last weekend (Sep. 17 – 19) we attended the NATO Days event in Ostrava. It seems that after a year of pandemic, the air show audience community […]

Airshow Insider: Behind The Scenes with the U.S. Air Force Thunderbirds.

A Lot Goes Into Making a USAF Thunderbirds Flight Demo Happen; Here is Some of the Advanced Preparation. Selfridge Air National Guard Base in Mt. Clemens, Michigan in the U.S. celebrated their 100th Anniversary with […]