After being unexpectedly requested to refuel a CAS (Close Air Support) aircraft targeting a high-level enemy leader, a KC-135 found itself “below bingo.”

Although they usually offload fuel to other aircraft, aerial refuelers may have to take gas from other tankers to extend their “on station time” or to be able to return to their destination, as happened some months ago to a U.S. Air Force KC-135 Stratotanker over Afghanistan.

The U.S. tanker was in fact involved to a really long mission, so much so it had to be refueled by other KC-135s three times.

Nothing special then, besides an initial contact with another KC-135 to get some fuel and extend the mission.

“This was my first deployment as a receiver-qualified pilot,” said Capt. Kirk Evans, 384th ARS pilot in a USAF release. “Receiving fuel from a tanker [at a high altitude was pretty challenging]. The air is thinner, and I had less control authority over the aircraft because the engines are less responsive.”

After completing the operation, the Stratotanker returned to its racetrack and continue its refueling mission.

In accordance with the original task, it refueled two aircraft but before heading back to its home base, it got a radio call to relocate and potentially refuel a CAS aircraft needing assistance because an alert refueling plane would not make it in time.

The receiver requested assistance and the KC-135 rushed to help. But the AAR (Air-to-Air Refueling) operation was not previously planned and the tactical scenario as well as the type of aircraft made for an “unorthodox situation.”

The two aircraft made contact far below the surrounding peaks and in a descent, to compensate for the receiver’s slower speed (read below for more about the CAS aircraft.)

To make things more complicated, the receiving crew informed the Stratotanker that they needed 18,000 pounds of fuel whereas the KC-135 had only 7,000 pounds before going “below bingo”, that is to say, below the fuel state required to return home.

Still, the tanker offloaded the requested amount of fuel to the receiver so that it could successfully continue its mission: going after a high-level enemy leader on the ground.

Unable to return home the Stratotanker aircrew started contemplating other options, the first of those was diverting to a nearby airfield. There were two airbases within their reach: one was pretty unsafe, as it was getting attacked frequently, whereas the other one was under a thunderstorm.

“We were authorized to divert to a closer air base when we were notified there happened to be another tanker on their way that had a little extra gas,” said Evans.

Hence, the KC-135s headed towards each other for a second “buddy refueling” operation: the “below bingo” KC-135 received enough gas to meet the alert Stratotanker halfway, so it didn’t need to divert.

After a third “buddy refuel,” the Stratotanker was eventually able to return back to its deployment base after 13 and half hours!

The efforts of the KC-135 crew paid off, enabling two different missions, the second performed by the CAS aircraft that was able to “terminate” a high-level enemy leader.

Note: Although the U.S. Air Force did not disclose the type of receiver involved in the CAS mission, based on the “speed difference” and altitude, it is safe to assume it was an AC-130 gunship. 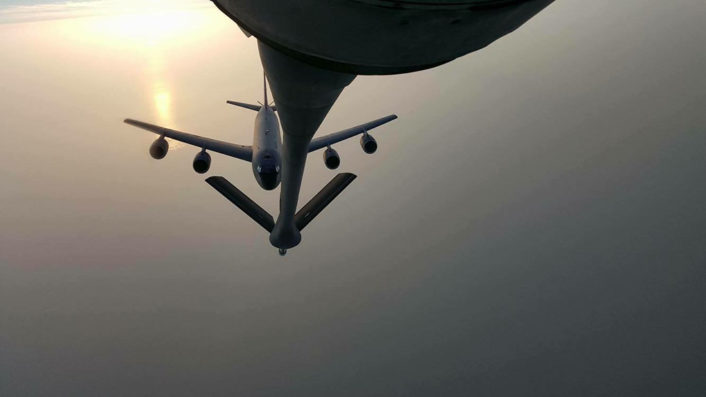 The 495th Fighter Squadron, The First Overseas-Based F-35A Squadron, Will Be Called The “Valkyries”

Cockpit footage from Rafale over Mali

The French Ministry of Defense has been releasing some really interesting footage of French forces in action in Mali. On Feb. 15 cockpit footage of a Rafale taking off and what appears to be a […]

Manned and unmanned aircraft have taken part in the air strikes launched on Aug. 1, against Daesh targets around Sirte, in Libya. On Aug. 1, the U.S. launched a new round of air strikes against […]