Whiteman Thunderbolt pilot has spent the equivalent of 250 days flying the A-10 “tankbuster” across the world (including 11 combat deployments.)

On Nov. 14, 2016, Lt. Col. John Marks, a pilot with the 303rd Fighter Squadron, logged his 6,000th hour in the A-10 Thunderbolt II at Whiteman Air Force Base, Missouri, becoming one of the highest time fighter pilots in the U.S. Air Force.

Marks has started flying the “Hawg” little less than 30 years ago. During the last three decades, he has flown the A-10 in theater during 11 combat deployments with the mission to support and protect forces on the ground.

“Six thousand hours is about 3,500 sorties with a takeoff and landing, often in lousy weather and inhospitable terrain,” said Col. Jim Macaulay, the 442d Operations Group commander in an Air Force release about the incredible milestone. “It’s solving the tactical problem on the ground hundreds of times and getting it right every time, keeping the friendlies safe. This includes being targeted and engaged hundreds of times by enemy fire.”

Lt. Col. Marks has started flying the Thunderbolt at low-altitude, in Europe, during the Cold War, when the A-10 focused on developing tactics to attack Soviet tanks in the battlefield.

During the years, the mission has evolved.

A-10s have become more sophisticated, new sensors and weapons have become available and these have made the “Warthog” even more lethal. Flying at higher altitudes above Afghanistan, Iraq or Syria, the Thunderbolts remain the most efficient CAS (Close Air Support) platforms available.

“In the end, we can cover the ground forces with everything from a very low-altitude strafe pass only meters away from their position, to a long-range precision weapon delivered from outside threat ranges, and everything in between,” said Marks.

Noteworthy, Marks was part of an epic mission during the Gulf War, when two A-10s wiped out 23 Iraqi tanks (a story that we described in detail here.)

“The trio of missions I flew on February 25, 1991, with Eric Salomonson on which we destroyed or damaged 23 Iraqi tanks with oil fires raging all over Kuwait certainly stands out,” he expressed. “The sky was black from oil fires and smoke and burning targets, lending to an almost apocalyptic feel.”

Indeed, during the same mission, the A-10s landed twice at a FOL (Forward Operating Location), were refueled and re-armed to return over the battlefield and help the Marines near Kuwait City.

“Recently, a mission I flew on our most recent trip to Afghanistan, relieving a ground force pinned down by Taliban on 3 sides and in danger of being surrounded, using our own weapons while also coordinating strikes by an AC-130 gunship, 2 flights of F-16s, Apaches, and AH-6 Little Birds, stands out as a mission I’m proud of,” continued Marks about one of the most rewarding missions of his career, which earned him the President’s Award for the Air Force Reserve Command in 2015.

With such an experience, Marks serves as a mentor for younger pilots in training.

“I’ve watched him mentor young pilots in the briefing room then teach them in the air,” said Macaulay. “Every sortie, he brings it strong, which infects our young pilots that seek to emulate him.”

“I like to think we can show them a good work ethic as well,” Marks added. “You always have to be up on the newest weapons, the newest threats, the newest systems. You can never sit still.” 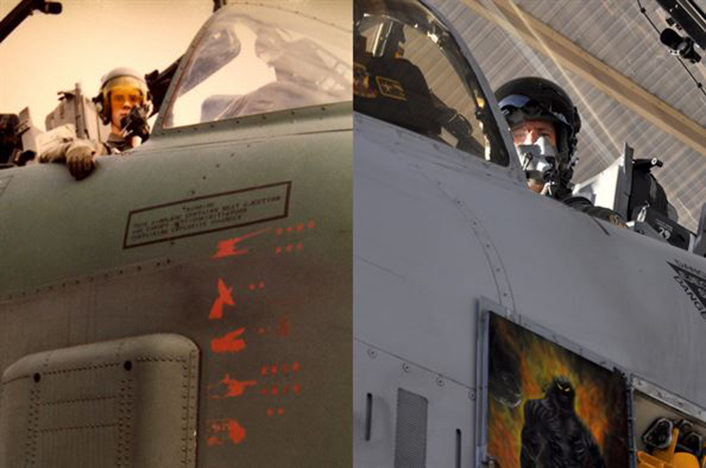 Wanna know what’s behind the trademark BRTTTTT noise of the A-10 Warthog’s GAU-8/A Avenger Gatling Gun? Then, watch this. Dubbed Warthog, Hog or just Hawg, the A-10 Thunderbolt II is, basically, an airplane built around the GAU-8 Avenger 30-mm […]

Take a look at these rare shots of a real Il-38 Dolphin of the Soviet Naval Aviation painted with US insignias. The following images of an Il-38 in U.S. Navy markings were brought to my […]

Regarding the last post about the Korean MiG-21s’ highway operations here’s another interesting thing. It is a fragment of a Polish movie Na Niebie i Na Ziemii (In the Sky & On the Ground) which is […]