For the first time in 32 years, four A-10 Warthogs, belonging to the 127th Wing, Michigan National Guard, performed highway landing practice: it occurred in Estonia, as part of Saber Strike 16 exercise, on Jun. 20.

A @usairforce A-10 lands on a highway for 1st time in 30 years as part of exercise #SaberStrike in #Estonia pic.twitter.com/rDxhB8ovVY 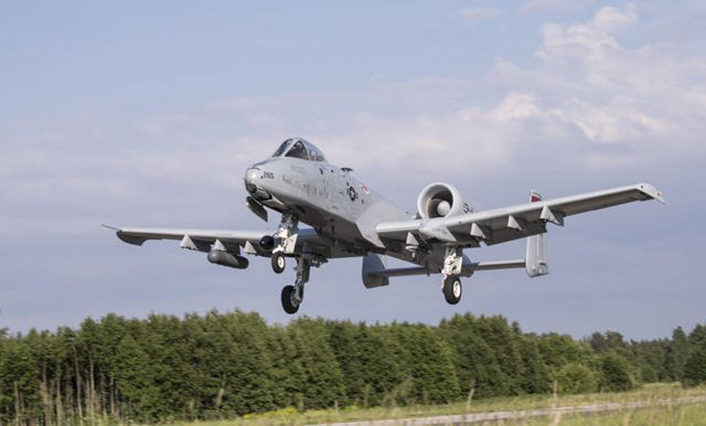 After WWII and through the Cold War some countries developed the concept of highway strips to get rid off one of the basic drawbacks of combat plane – runway dependency – in case of nuclear war. Airstrips and their coordinates were not secret, neither in the West nor in Soviet Russia. Obviously they would be destroyed in the beginning of any conflict.

Designed in the 1920s and 30s, the German Autobahn had sections that could be used as runways by tactical jets as well as military cargo planes: for instance, the A-29 between Ahlhorn and Groβenkneten is one example of highway where, during the Cold War, NATO planners built a road to accommodate NATO aircraft if a war with the Soviets broke out.

In that period, even Warsaw Pact countries had several highway strips: Poland had as many as 21 DOLs, Drogowy Odcinek Lotniskowy, which is a Polish name for highway strips: improvised runways made of hightway section with wider ends to provide parking spaces for the planes.

One of these is still located near Stettin (Szczecin) on the Voyvodeship Road 142 near the S3 State Road on the German-planned highway towards Kaliningrad. This highway was built in the 1930s by Adolf Hitler and was a part of the Reichsautobahn network which emerged before the WWII; the remaining ones are mostly out of use.

Highway landings were part of the standard training conducted mainly in Central, Eastern and Northern Europe during the Cold War. With the collapse of the Warsaw Pact, highway take-offs and landings became less frequent.

However, with the renewed Russian threat, training for operations from dispersed places, including public roads, has gradually resumed and involves Finnish and Swedish planes and after more than 30 years, even the U.S. A-10 tankbusters, frequent visitors of Russia’s backyard lately.