Italian Tornado combat planes took part in an anti-drug mission aimed at finding a marijuana plantation not far from their homebase.

About 250 kg of cannabis were seized in northern Italy after a plantation was discovered at Quinzano, near Brescia.

Interestingly, the operation was supported by the Italian Air Force Tornado IDS aircraft of the 6° Stormo (Wing) based at Ghedi, near Brescia. The ItAF jets were in fact tasked with reconnaissance runs aimed at discovering the farm and gathering imagery that was then used by the Carabinieri (Military Police) to arrest two people involved with the plantation.

It is not the first time Italian attack planes are requested by other national agencies to perform reconnaissance missions: for instance, in the aftermath of the 6.0 earthquake that hit central Italy on Aug. 24 causing about 300 deaths, ItAF Tornados supported the relief operations collecting imagery used to map the damages to Amatrice and the nearby villages.

The Tornados have already been involved in sort-of anti-drug missions abroad: from November 2008 to December 2009, the Italian jets were deployed to Mazar-i-Sharif, Afghanistan, from where they supported ISAF with reconnaissance missions: many of these were tasked with the aim of discovering opium poppy farms and depots across a country that produces more than 90% of heroin worldwide.

In “recce” role at home and in theater, the Italian aircraft carry a Rafael Reccelite reconnaissance pod: the Reccelite is a Day/Night electro-optical pod able to provide real-time imagery collection. It is made of a stabilized turret, solid-state on board recorder that provides image collections in all directions, from high, medium and low altitudes.

The Reccelite reconnaissance pod is used to broadcast live video imagery via datalink to ground stations and to ROVER (Remote Operations Video Enhanced Receiver) tactical receivers in a range of about 100 miles.

The Tornados have used the pod in combat not only in Afghanistan, but also in Libya and more recently in Kuwait, where the aircraft were deployed to support, with ISR (Intelligence Surveillance and Reconnaissance) missions, the air war against ISIS.

By the way, the pod can also be carried by the AMX ACOL, the light tactical jet that has performed close air support/air interdiction and ISR missions in support of ISAF from 2009 to 2014, and have recently replaced the Tornados in Kuwait. 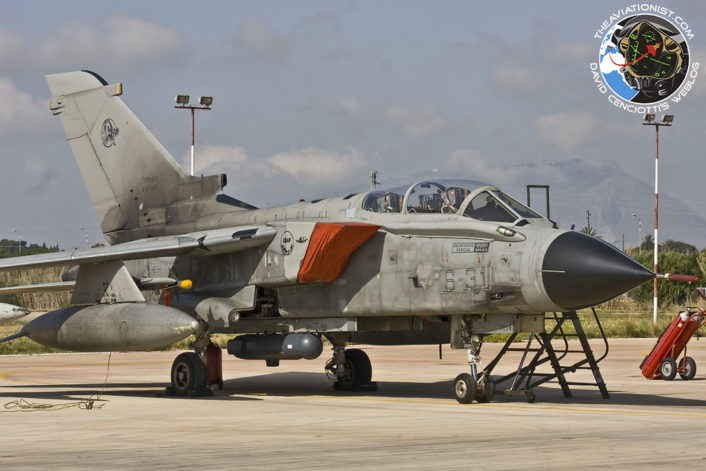 Training missions in reconnaissance role see the aircraft overflying a series of targets taking photographs that are then analysed by image interpreters: during the above mentioned mission, one of the targets was a real one, a suspected cannabis farm.

On Jun. 10, six Eurofighter Typhoon fighter jets of the Italian Air Force deployed to Iceland to provide air policing of the airspace around the northern European island. Supported by two KC-767A aerial refuelers and […]