Operation Odyssey Lightning kicked off on Aug. 1, when the U.S. launched a new round of air strikes against Islamic State positions in northern Libya following a request by the Libyan Government of National Accord (GNA) to support GNA-affiliated forces seeking to defeat Daesh in Sirte.

Although the first raids were conducted by U.S. Air Force MQ-9 Reaper drones as well as by AH-1W helicopters operating from the U.S. amphibious assault ship USS Wasp, since then, the majority of the attacks were launched by the AV-8B and AV-8B+ Harriers with the Marine Medium Tiltrotor Squadron 264 (Reinforced) – VMM-264, the composite squadron that constitute the Aviation Combat Element of the 22nd MEU (Marine Expeditionary Unit).

From the beginning of Operation Odyssey Lightning to Aug. 29, the U.S. aircraft have completed 92 airstrikes. 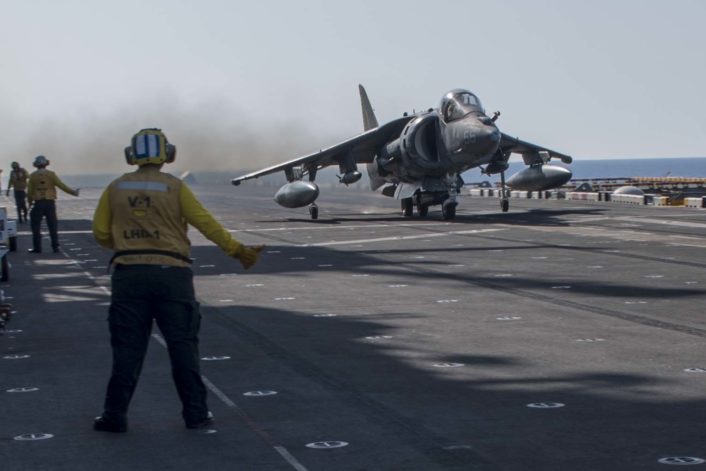 Based on the images released by AFRICOM so far, the Jump Jets (both AV-8B and AV-8B+ variants) have almost always carried 500-pound GBU-38 Joint Direct Attack Munitions (JDAMs) along with two drop tanks (with the AV-8B+ carrying also the Litening targeting pod) during day and night missions.

The following videos show some interesting footage filmed on the flight deck of USS Wasp during the Libya air campaign.

Noteworthy, six British handlers from Culdrose, UK, are serving aboard the amphibious assault ship to get real life experience of safely operating fast jets and helicopters on a flight deck and prepare to what they’ll be doing on HMS Queen Elizabeth in a couple of time.

Just a handful of naval aviators have completed 1,200 trap landings on the flight deck of an aircraft carrier. Since Feb. 1, Capt. Robert Gentry, is one of them. Landing on a carrier is anything […]

VRC-30 DET 1 made a video of a trap/cat shot onboard the Charles de Gaulle. Not only did French combat planes operate from the flight of USS Carl Vinson and were refueled by VFA-81 F/A-18E […]