Manned and unmanned aircraft have taken part in the air strikes launched on Aug. 1, against Daesh targets around Sirte, in Libya.

On Aug. 1, the U.S. launched a new round of air strikes against Islamic State positions around Sirte, in northern Libya, mid-way between Tripoli and Benghazi.

According to the Pentagon, the raid was conducted following a request by the Libyan Government of National Accord (GNA) to support GNA-affiliated forces seeking to defeat Daesh in its primary stronghold in Libya.

The raids were just the final stage of a three-phase operation planned and managed by AFRICOM, MilitaryTimes has reported: the first element of this plan was dubbed Operation Odyssey Resolve, consisting of ISR (Intelligence Surveillance Reconnaissance) flights in the region; the second, Operation Junction Serpent, provided targeting information; while the third element, Operation Odyssey Lightning, saw the actual air strikes take place.

The latter ones were reportedly launched by a U.S. Air Force MQ-9 Reaper drone , as well as by helicopters aboard the U.S. amphibious assault ship USS Wasp.

In particular, at least two Super Cobra from HMLA-269 were launched from USS Wasp and used their AGM-114 Hellfire missiles to destroy some ground vehicles and two T-72 tanks.Here below an interesting infographic put together by Middle East expert, military aviation journalist Babak Taghvaee who has collected some details about the first raid in Libya.According to the details available at the moment, the AV-8B Harriers have not been involved in the air strikes yet. 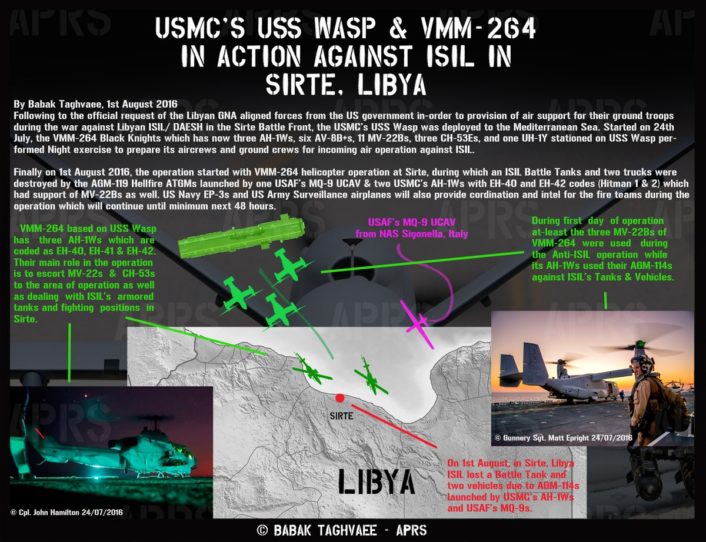 Auction House Lists Rare X-15 Photo with Autographs of Neil Armstrong, Pete Knight, Scott Crossfield and More. With holiday shopping season here, what do you get for the wealthy aviation collector who has everything? An […]

A New Special Colored F-16 From The 36th FS Flying Fiends Was Unveiled At Osan Air Base, 50 miles south of the DMZ. The 36th Fighting Squadron “Flying Fiends”, belonging to the 51st Fighting Wing, […]